The Fed delivered another outsized rate increase at today’s FOMC meeting, but this time it was ‘only’ worth 50 basis points (bps), a quarter-point downshift from the historical hikes the voting members had been engineering during their prior four FOMC meetings. As a result, the Fed Funds trading range will end 2022 and begin the new year at 4.25%–4.50%.

The downshifting in the magnitude of rate hikes was well telegraphed by Powell & Co. and appeared to be widely expected by the money and bond markets. Indeed, at the November Fed meeting and subsequent public appearances, Fed officials were highlighting how monetary policy acts with a lag and the time was approaching to begin moving away from 75-bps increases and take stock of what has transpired up to this point.

As I’ve blogged before, the ‘Volcker-esque’ increase in Fed Funds this year has resulted in the target range going from a zero interest rate policy (ZIRP) as recently as March to an upper bound of 4.50% now, an incredible total of 425 bps in rate hikes. Although the increases of the Greenspan/Bernanke era (2004–2006) amounted to an identical 425 bps, the moves were more methodical, coming in at 25-bps intervals at consecutive FOMC meetings (see below). 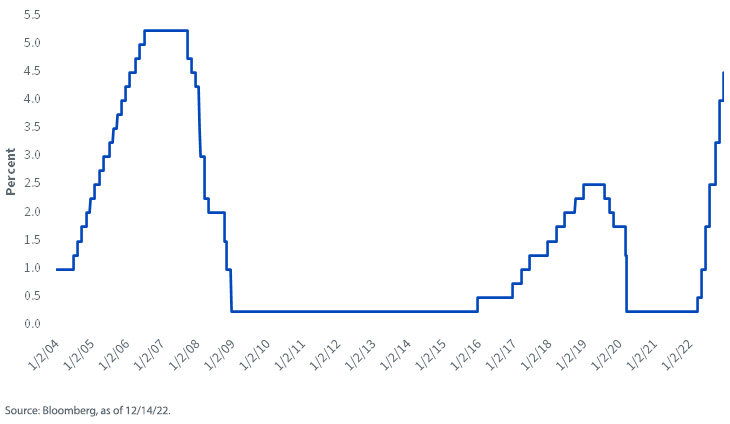 So, were does Chairman Powell take monetary policy from here? Well, one aspect of this tightening cycle, quantitative tightening (QT), continues to fly under the radar, just as the policy makers hoped, and appears to be on auto-pilot for now. Now comes the tricky part…additional rate hikes. Based on the December dot-plot, the Fed seems poised to continue increasing the Fed Funds Rate into 2023, with a terminal rate coalescing somewhere around the 5% level.

Against this backdrop, the key questions now are centered on how fast will the policy makers get to that terminal rate and how long will they stay there? Let’s take the first part of the question. There are generally two schools of thought on this: 1) much like the Fed front-loaded rate hikes up to this point, they should get to the terminal rate sooner rather than later, or 2) given the historical amount of tightening still waiting to work its way through the system, the Fed should become more deliberate in its approach.

Whichever choice the Fed makes, one thing we know for sure is that another rate hike, at a minimum, is on the table for early in the new year. That brings us to the much ballyhooed ‘Powell Pivot.’ Right now, I would presume once the Fed gets to their terminal rate, the policy makers will then go into a holding pattern, and then possibly entertain rate cuts during the latter portion of 2023. Based on recent Fed guidance on this issue, there seems to be a consensus not to reverse course too soon, but as we’ve seen, things can change quickly

+ Fixed Income: A Return to Normalcy

+ Pay No Attention to That Man Behind the Curtain