The Fed delivered another outsized rate increase at today’s FOMC meeting, raising the Fed Funds target yet again by 75 basis points (bps) to a new range of 3.75%–4%. While the money and bond markets seem to be caught up with whether Powell & Co. will move to a 50- or 75-bps rate hike at the December FOMC meeting (“Powell Pivot”), I feel the focus should be on what the terminal rate is going to be and how long will it stay there. Nevertheless, the Fed does seem to be at a point in this tightening cycle where they could be leaning toward reducing the size of further rate increases—data permitting, of course.

With this latest move, the current Fed Funds target is now well above the 2.50% terminal rate of the prior rate hike cycle (2015–2018) and is at its highest level since early 2008. In other words, the Fed has moved even further into restrictive territory. Incredibly, the Volcker-esque rate increase this year has resulted in the Fed Funds target range going from a zero-interest rate policy (ZIRP) as recently as March to 4% now, a total of 375 bps in rate hikes. Although the increases of the 2004–2006 Greenspan/Bernanke era amounted to a total of 425 bps, the moves were more methodical, coming in 25-bps intervals at consecutive FOMC meetings (see below). 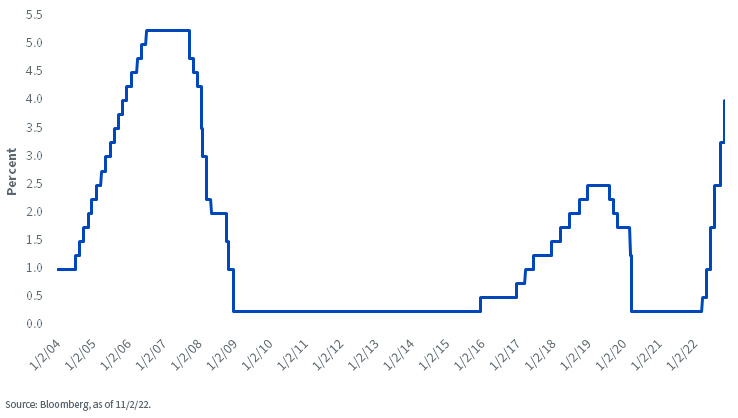 Let’s go back to the prospect of a Powell Pivot. With the November 75-bps rate hike, a lot of tightening has occurred in a short period of time, not to mention the fact that quantitative tightening (QT) is slowly starting to kick in as well. Monetary policy does act with a lag, so it would not be at all unreasonable to see Powell & Co. move to a less aggressive rate hike path going forward.

Prior to the November FOMC meeting, Fed Funds Futures for both May and June 2023 were focused on a terminal Fed Funds target range of 4.75%–5%, or 100 bps above the current level. The next unknown will be whether the Fed goes into ‘raise and hold’ mode in 2023 or entertains rate cuts during the second half of next year. Based on recent Fed-speak, there seems to be a consensus at the present time to not reverse course too soon—but as we’ve seen, things can change quickly.

In my opinion, the real Powell Pivot will be when the Fed begins its messaging surrounding the timing of rate cuts. For the time being, labor market and inflation data will more than likely keep the Fed on a path for continued rate hikes into 2023. Against this backdrop, if the policymakers do begin to dial back the size of their rate hikes going forward, maybe we could call it ‘Pivot-Lite.’