When I last wrote about U.S. small caps, valuations had reached historic lows after immense springtime volatility. Unfortunately for bulls, small caps have yet to rebound, but attractive valuations remain.

Though recessionary fears are top of mind, we believe those with a contrarian view or the confidence to remain invested amid the volatility can still benefit from small-cap allocations. Their future may be brighter than the grim forecasts suggest.

Both measures are currently trading well below long-term averages and have remained more than two standard deviations below that average amid the summertime and early fall volatility. Even after a “dead cat bounce” from June to July, small-cap valuations have fallen two straight months to reach their lowest level since the depths of the global financial crisis.

In percentage terms, both multiples are about 35%–40% discounted from their long-term average and are nearing single-digit territory.

Value and growth styles haven’t fared much better, trading roughly 35%–44% (and about two standard deviations) below their long-term averages. 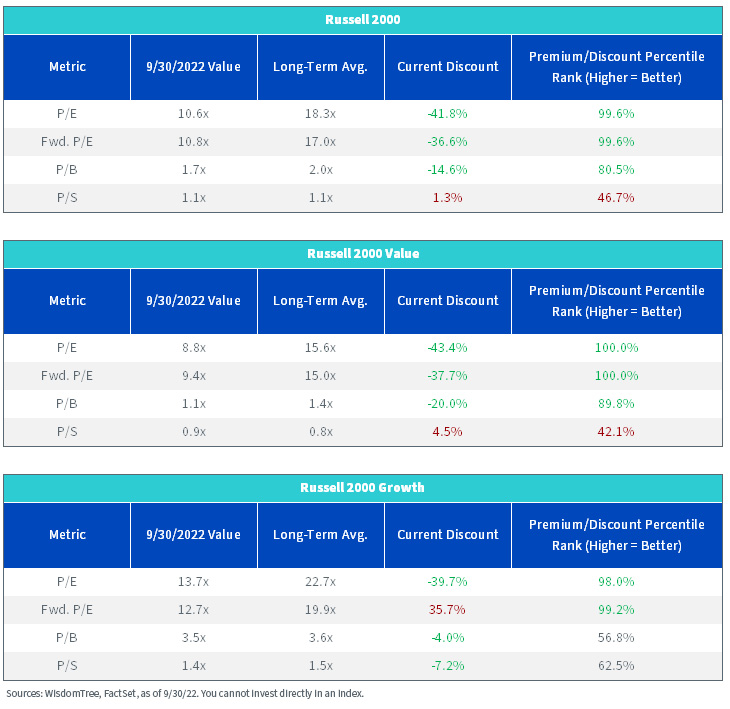 Historically, small-cap forward P/Es commanded about a 4% premium to large caps, though this relationship has steadily broken down in the last few years. After the summertime volatility, the forward P/E of the Russell 2000 relative to that of the large-cap-centric Russell 1000 remains more than two standard deviations below its long-term average.

Their relationship with mid-caps is similar, reflecting investors’ fears that a recession will disproportionately affect smaller companies heavily dependent on the local economy.

For those who believe the Fed may tip the U.S. into a recession with its aggressive rate hike agenda, it is understandably counterintuitive to dignify an asset class notoriously sensitive to economic growth amid expectations of reduced earnings and profit margins. But for the intrepid small-cap investor, we believe the future has historically looked bright after similar periods.

Over the past two decades, small-cap valuations have breached a 20% discount to their long-term average forward P/E on nine occasions (using monthly data). For eight of these nine observations, small caps subsequently outperformed large caps over a two-year period by roughly 5% on average. 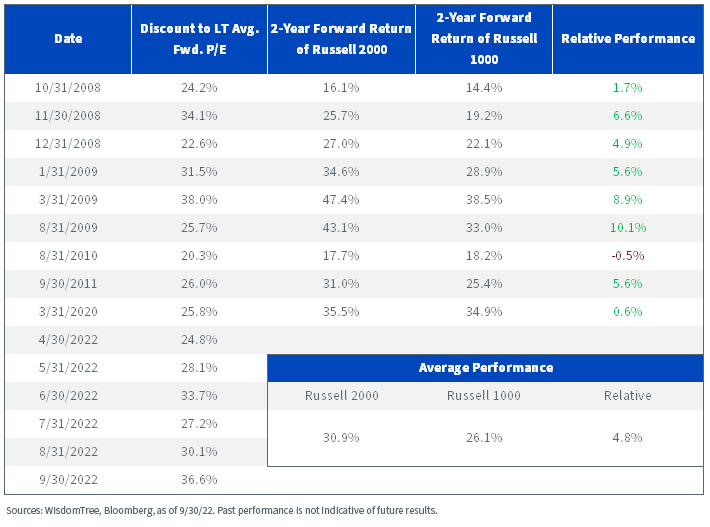 Many of these observations occurred in the wake of historical economic disasters, such as the global financial crisis and the onset of the COVID-19 pandemic. Although 2022 has looked similar to those timeframes from a market performance standpoint, history suggests a rosy outlook for small caps in the aftermath of a severe downturn.

Fortune (May) Favor the Bold

We believe all three look attractive in today’s small-cap market, with valuations deeply below long-term averages and discounts among the lowest since each Fund’s inception.

If small caps behave in accordance with historical patterns in the aftermath of a downturn, these Funds may potentially catch a strong tailwind. 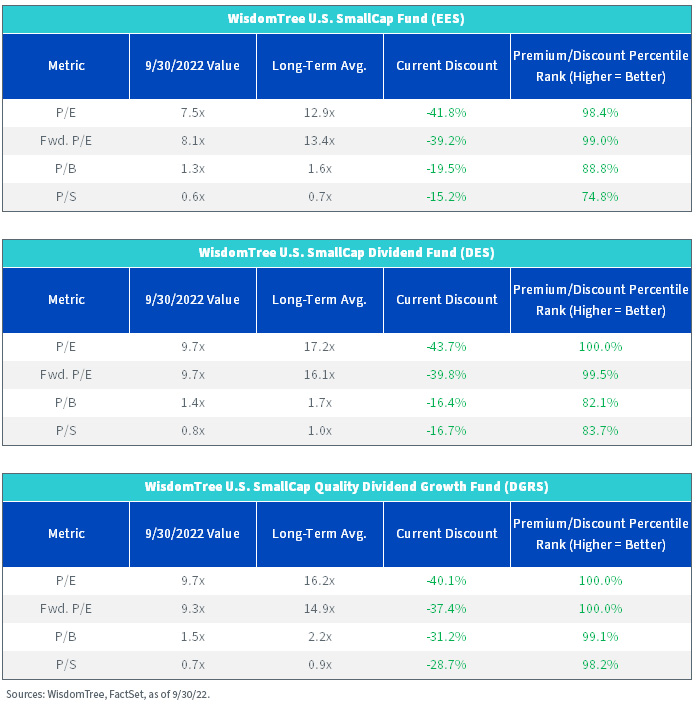 There are risks associated with investing, including the possible loss of principal. Funds focusing their investments on certain sectors and/or smaller companies increase their vulnerability to any single economic or regulatory development. This may result in greater share price volatility. Dividends are not guaranteed, and a company currently paying dividends may cease paying dividends at any time. Please read the Fund’s prospectus for specific details regarding the Fund’s risk profile.