Pay No Attention to That Man Behind the Curtain

With the money and bond markets preoccupied with inflation, the chance of a recession and, of course, Fed rate hikes, the state of the U.S. government’s finances has not received much attention, if any. The situation has rather reminded me of the classic line in the Wizard of Oz: “Pay no attention to that man behind the curtain.”

With that in mind, I thought it would be interesting to provide some insights on this front. Before getting started, here is a quick ‘U.S. budget 101’ as a refresher. The federal government’s fiscal year (FY) does not line up with the calendar year. It runs from October through September, so we have now received the results for FY 2022.

According to the Treasury Department, the U.S. ran a deficit of $1.38 trillion in FY 2022. Interestingly, some of the headlines relating to this announcement seemed almost euphoric, pronouncing that the prior year’s deficit was cut in half, and that it was the biggest decline in history.

This is where things need to be put into some proper perspective. While the headlines were technically accurate, the total of FY 2022 red ink was an improvement on the second-largest deficit ever recorded: $2.77 trillion for FY 2021 (the largest shortfall, at $3.13 trillion, occurred in FY 2020), but it was only slightly below the previous peak of $1.42 trillion in FY 2009.

Obviously, the improvement from the 2020 historical peak, as well as last year, has had a lot to do with reduced government spending following the earlier adverse effects of the Covid lockdown. In addition, revenues increased as the economy rebounded into positive territory. For FY 2022, total outlays declined by 8.1%, while overall receipts surged by 21%.

That’s the past. What about the future? For all intents and purposes, it looks as if the baseline still resides somewhere around a deficit of a trillion dollars, at least in the nearer term. The future is another story.

The Congressional Budget Office (CBO), which operated under the assumption that “current laws governing taxes and spending generally do not change,” reported that “federal deficits are projected to nearly triple over the next 30 years, from 4% of GDP in 2022 to 11% in 2052.” The primary driver of this increase is expected to come from net interest expense. Based on the CBO’s projections, net interest outlays will expand from the current pace of 1.6% of GDP to 7.2%. As a result, this could cause the federal debt held by the public to rise to 185% of GDP in the next 30 years (see below). 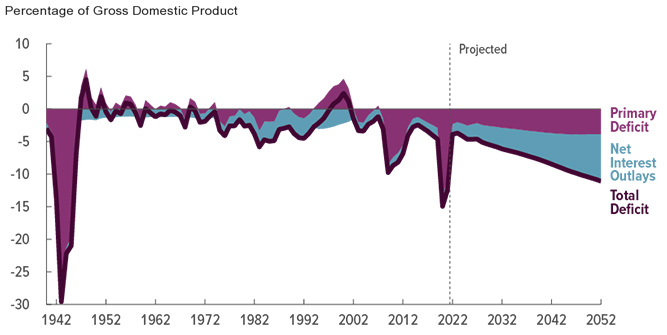 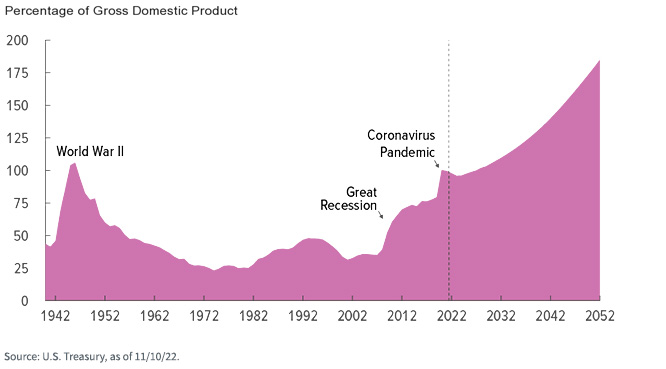 While deficits do matter in the long run, interest rate trends tend to take their primary cues from Fed policy as well as the economy and inflation in the shorter run. In that regard, the lack of attention the fixed income arena is currently paying to the U.S. government’s finances may seem reasonable on the surface. However, let’s hope those storm clouds that Dorothy and Professor Marvel (later the Wizard) saw coming dissipate in the years ahead

+ Is Five Becoming the New Four?