Is Five Becoming the New Four?

Thanks to Powell & Co., the month of November has gotten off to an inauspicious start for the money and bond markets. I recently blogged about Fed Funds and Treasury yields becoming a “four”gone conclusion , and now that these milestones have been met, you have to ask yourself the question: is five becoming the new four?

It all begins with where the terminal rate of the Federal Funds target range is going. At the September FOMC meeting, the Fed’s own median estimate placed the level at 4.6%. However, at the November FOMC meeting presser, Chairman Jerome Powell provided an update, stating that “incoming data suggests the September dots should be higher.” What, exactly, is higher? Well, if you look at the June 2023 Fed Funds Futures contract, the level was 5.14%, as of this writing. In other words, the market is pricing in a terminal Fed Funds target range of 5%–5.25%. 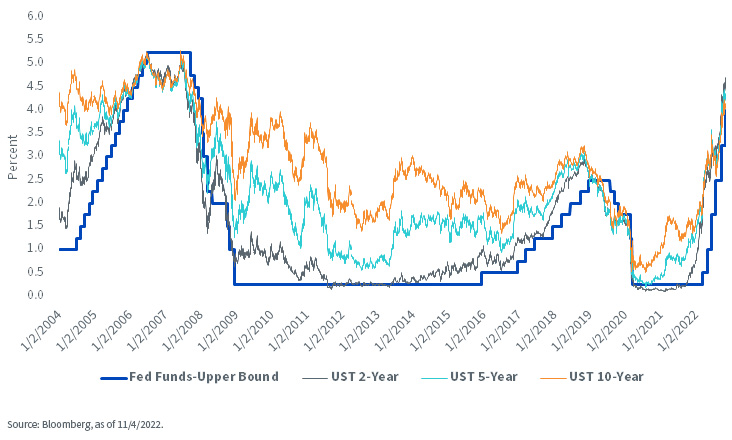 If this is where the Fed is headed in this rate hike cycle, where does that put the key U.S. Treasury (UST) 2-, 5- and 10-Year yields? Typically, these maturities will trade with a ‘spread’ or yield level over Fed Funds, especially during a tightening backdrop. This is exactly what investors have witnessed in this go-round as well (see graph), and there is nothing to make me to think this trend won’t continue until the Fed pivots to a ‘pause and cut’ monetary policy phase.

Based on Powell’s presser, the Fed is guiding the markets for a potential ‘higher for longer’ Fed Funds scenario, underscored by his comments that rate hikes still have “some ways to go” and it would be “premature to pause,” let alone to think of cutting.

The aforementioned UST yield levels are not meant to be an outright prediction. There is no doubt the Fed seems to be leaning toward a slower pace of rate hikes, but the terminal rate sure looks like it’s going to be headed in the 5% direction. Against this backdrop, history suggests 5% yield handles could be forthcoming for short-term Treasuries, at a minimum, with intermediate maturities such as the 5-Year note not too far behind. At this point, I’m not ready to make that assumption for the UST 10-
Year yield (at least not yet), but it does appear as if some renewed elevation moving back into the 4.25%–4.5% trading range (if not a bit higher) is a reasonable scenario.