When reviewing the current state of the global economy and investment markets, we recommend focusing on market signals and weeding out market noise. We believe the five primary economic and market signals providing perspective on where we go from here are GDP growth, earnings, interest rates, inflation and central bank policy.

Some argue we have entered a technical recession because there was negative GDP growth in each of the first two quarters. Others argue that the continuance of a strong labor market suggests we have not. Either way, the economy is slowing and expected to be sluggish or recessionary in 2023. 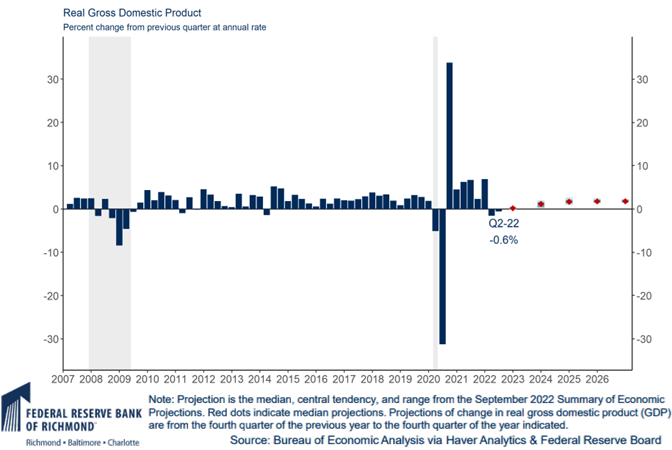 Global GDP growth is still expected to be positive in 2022 (excluding Russia) but is expected to fall fairly dramatically in 2023. 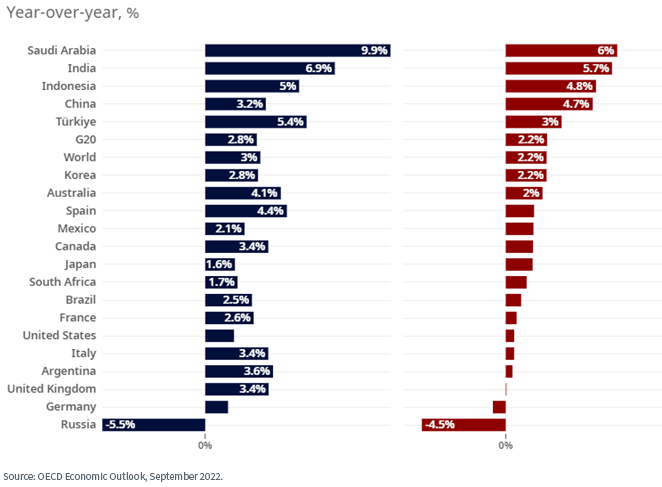 Translation: A recession is on the horizon. The bears suggest we are already in one, while the bulls suggest we won’t see it until 2023. There remains positive economic news, but many indicators are declining. In the U.S., much will depend on the Federal Reserve’s actions and the corresponding effect on consumer and investor behavior.

The Fed, the ongoing Russia/Ukraine war and rising geopolitical tensions continue to be the three dominant “known unknowns” in this outlook.

The U.S. Q3 2022 earnings season has just begun, and the outlook is for lower but still positive revenue and earnings growth. Future estimates are also positive but muted. We will know a great deal more as we roll through the Q3 earnings season and hear future guidance from corporate CEOs.

Global earnings expectations and valuations are a bit at odds with general investor sentiment. The terrible market through the first three quarters brought global valuations to well below their 25-year average. Is it a case of “be greedy when others are fearful?” We recommend you consider hedging the currency risk of non-U.S. investments. 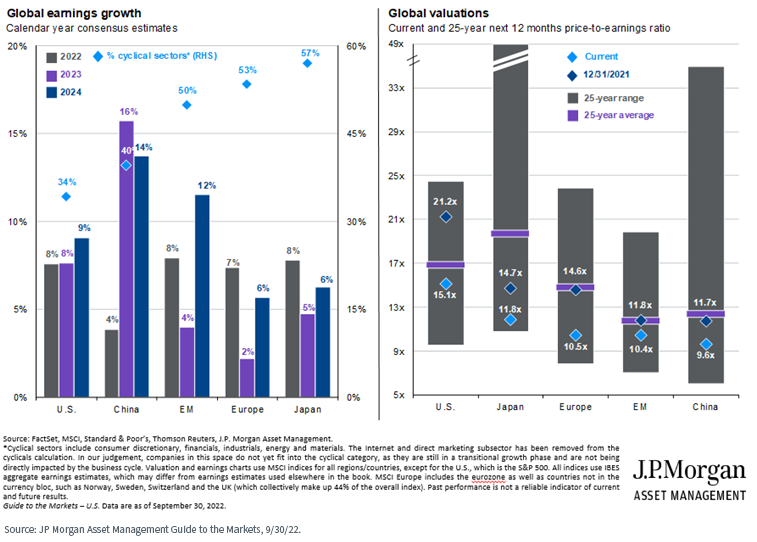 Translation: We have entered a period of great uncertainty with respect to the equity markets. All eyes are on Q3 earnings and future guidance. Valuations have fallen to the point where many markets are attractively priced from an historical perspective, but we expect increased volatility as we move through the fourth quarter.

We saw a strong factor rotation away from growth and toward value and dividend stocks in the first three quarters of 2022. While we believe this trend will continue, we remain diversified by risk factor within our Portfolios because volatile markets can change direction quickly.

We also believe quality (i.e., companies with strong balance sheets, earnings and cash flows) may become increasingly important as we sail into the potentially volatile seas of the remainder of 2022.

The yield curve has become an item of intense focus these days. With the economy slowing and the Fed engaged in both aggressive rate hikes and quantitative easing, there is a great deal of uncertainty about what the yield curve might be telling us regarding the possibility of recession. Many people focus on the spread between the 10-Year and 3-monthTreasury rate—an inversion is viewed as a harbinger of recession. We’re not there (yet). 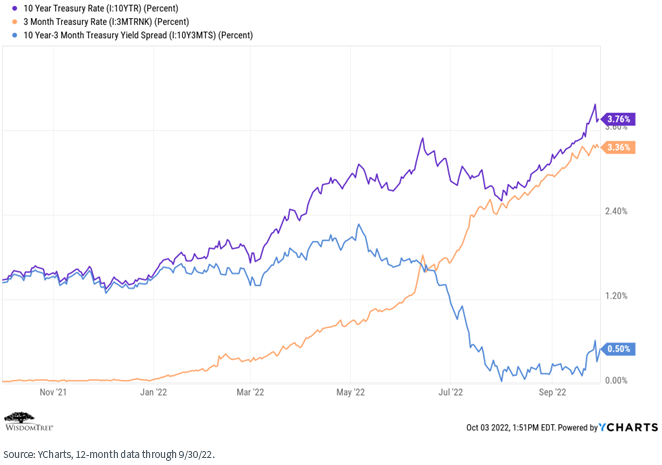 The Treasury real yield (nominal rates minus inflation) curve is positive across the maturity spectrum, meaning investors can earn a real return on their bond portfolios again

Credit spreads have risen in anticipation of an economic slowdown. But corporate balance sheets are in decent shape, so coupons should be safe. We recently increased the duration of our strategic fixed income Model but maintain a short duration relative to the Bloomberg U.S. Aggregate Index, as well as an over-weight allocation to quality credit.

We believe there may be relative value in high-yield and interest rate hedged bonds, and we still like floating rate Treasuries. 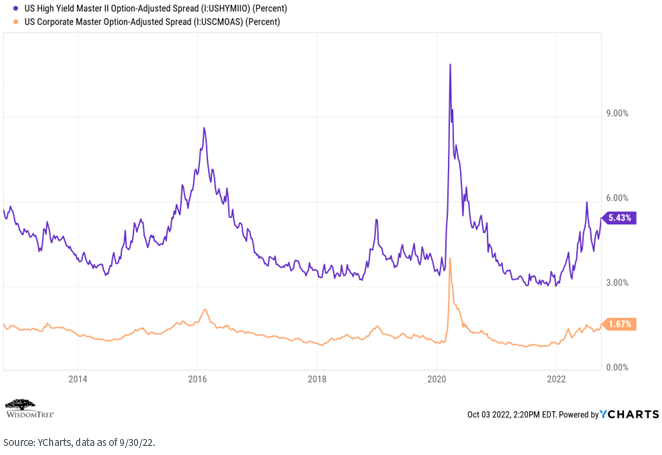 Translation: Recently, we slightly increased duration within our Fixed Income Portfolios but maintain a short duration position and an overweight allocation to quality credit relative to the Bloomberg U.S. Aggregate Index. We are comfortable there but are paying closer attention to the duration trade. Bloomberg Aggregate Bond Index: The Bloomberg Aggregate Bond Index or "the Agg" is a broad-based fixed-income index used by bond traders and the managers of mutual funds and exchange-traded funds (ETFs) as a benchmark to measure their relative performance

Inflation will remain a primary concern for the remainder of 2022 and well into 2023. The Fed remains aggressively hawkish, and all eyes will be on the central bank’s behavior and actions as we move through the fourth quarter.

There may be signs we are seeing peak inflation levels as the economy cools, supply chains re-open and oil prices stabilize (although this could change if OPEC decides to cut supply as it has indicated it plans to do). But we believe inflation will remain “sticky” and it will take some time to even approach the Fed’s target levels. 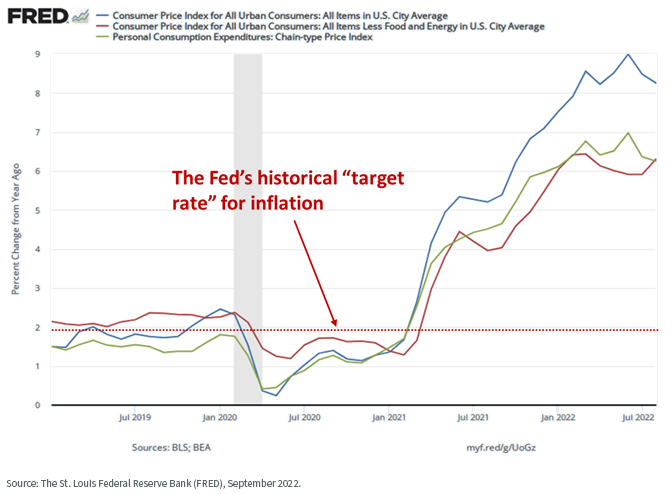 Global commodities cooled significantly over the past several months, as the market priced in a slowing global economy. The biggest variable now will be OPEC actions and the corresponding effect on oil prices. Some analysts are anticipating a return to $100 per barrel oil if the organization decides to lower production.

For definitions of indexes in the chart above, please visit the glossary.

Translation: Inflation remains the story of 2022, and will probably be so well into 2023. All eyes will be on the Fed through the fourth quarter as it has its last two FOMC meetings in November and December.

We note that rising inflation is not just a U.S. phenomenon—it is global. Other central banks have also begun their own rate hike regimes, even in the face of a slowing global economy.

We see an interesting situation with respect to the Fed. In its latest dot plot, most members seem to be sticking with the rate hike regime well into 2023. But the market may be pricing in a different outcome—one in which the Fed begins easing again in the second half of next year. 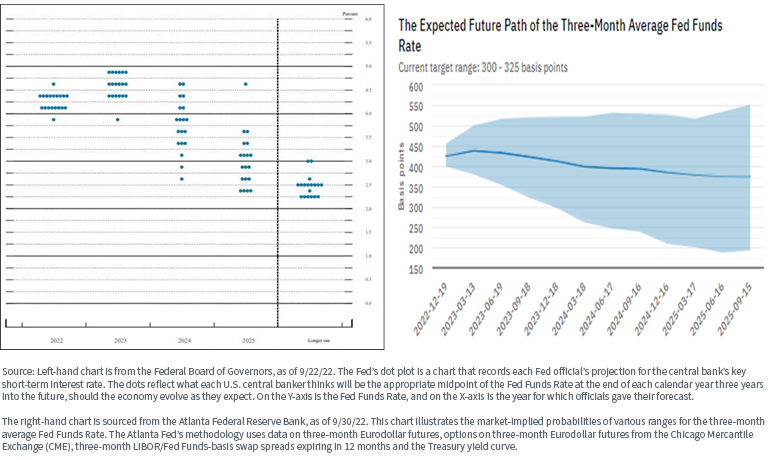 For definitions of indexes in the chart above, please visit the glossary.

Translation: All eyes are on the Fed. Our base case is that the Fed will maintain its rate hike regime through this year and into 2023. Inflation is proving to be stubborn, and the Fed seems to realize it stayed “too loose for too long” and is trying to make up for lost time.

When focusing on what we believe are the primary market signals, the “condition our condition is in” is uncertain. Economic growth is slowing. Earnings are expected to fall but be mildly positive. The labor market remains strong and consumer spending remains solid. Combined with high inflation, the ongoing Russia/Ukraine conflict, OPEC, and rising tensions between the U.S. and China and Iran, these are volatile and uncertain times.

We’ve already witnessed a significant factor rotation toward value and dividend stocks, both of which at least partially mitigated the broad market downturn through the first three quarters of 2022. We think that trend will continue, but we maintain our belief in risk factor diversification throughout our Portfolios. The bond market has become interesting again.

So, we believe we are in for increased volatility, and we continue to recommend focusing on a longer-term time horizon and the construction of “all weather” portfolios, diversified at both the asset class and risk factor levels