When reviewing the current state of the global economy and investment markets, we recommend focusing on market signals and weeding out market noise. We believe the five primary economic and market signals that provide perspective on where we go from here are GDP growth, earnings, interest rates, inflation and central bank policy.

It appears the U.S. economy may be falling into recession—the business cycle has not been eliminated. The debate right now is if we are already in one, may soon be in one or will eventually be in one, and whether that recession will be “shallow” or “deep.” Many economic indicators are slowing down, but the consensus estimate remains that we will see an overall low positive 0.5%–1% GDP print for 2022 (this chart is from the Wall Street Journal as of July 17). 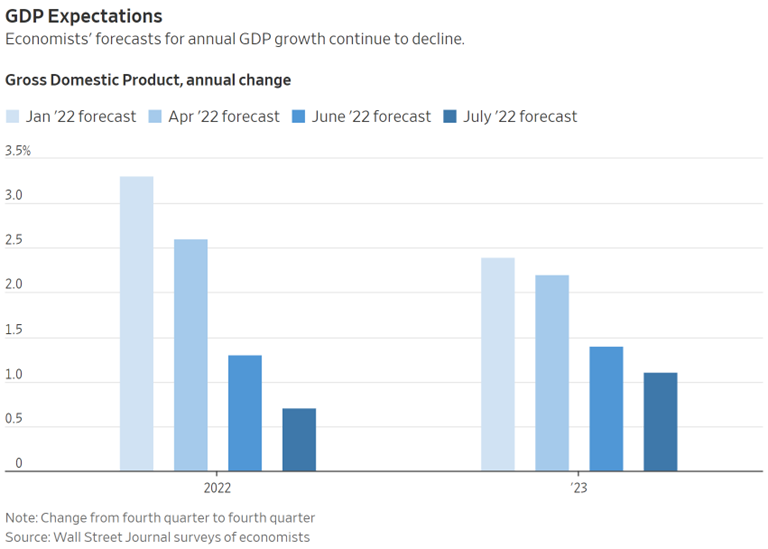 Estimated global GDP growth, though it is expected to remain positive, has also fallen. The consensus estimates are for roughly 3% growth for all of 2022.

Translation: A recession is on the horizon. The bears suggest we are already in one, while the bulls suggest we won’t see it until 2023. There remains positive economic news, but many indicators are declining. In the U.S., much will depend on the Fed’s actions and the corresponding effect on consumer and investor behavior.

The Fed, the ongoing Russia/Ukraine war and rising geopolitical tensions continue to be the three dominant “known unknowns” to this outlook. 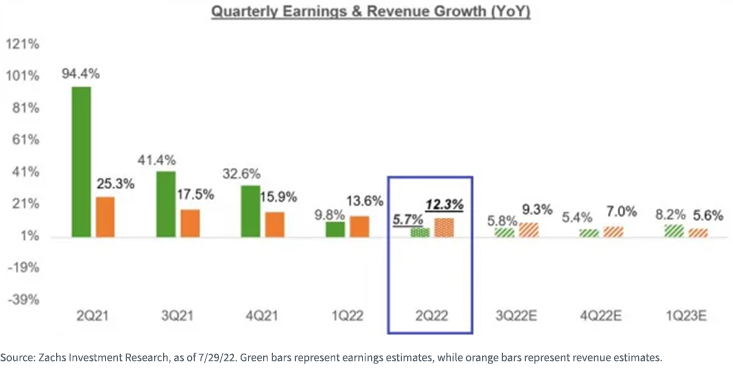 Non-U.S. earnings are also expected to fall but remain positive in 2022. Valuations outside the U.S. continue to look relatively attractive versus the U.S., especially in Japan. 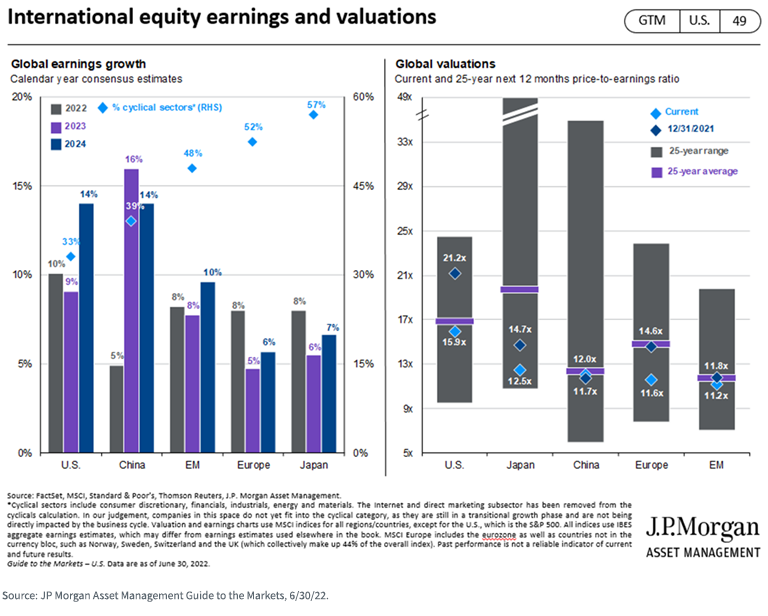 Translation: We have entered a period of uncertainty with respect to the equity markets. Earnings are “hanging in there” but future expectations are muted. Valuations have fallen to the point where many markets are not as “frothy” as they were at the beginning of the year, but history suggests increased volatility as summer ends and we move into the 4th quarter.

We saw a full blown “factor rotation” away from growth and toward value and dividend stocks in the first half of 2022. While we believe this trend will continue, we remain risk factor diversified within our portfolios in case growth makes a comeback, which it has shown signs of doing over the past 5-6 weeks.

We also believe “quality” (i.e., companies with strong balance sheets, earnings, and cash flows) may become increasingly important as we sail into the potentially volatile seas of the remainder of 2022.

The yield curve has become an item of intense focus these days. With the economy slowing and the Fed engaged in both traditional rate hikes and quantitative tightening, there is uncertainty about what the yield curve might be telling us regarding the possibility of recession. Many people focus on the spread between the 10-Year and 2-Year Treasury rate—an inversion is viewed as a harbinger of recession (though typically with a time lag of 9–18 months). 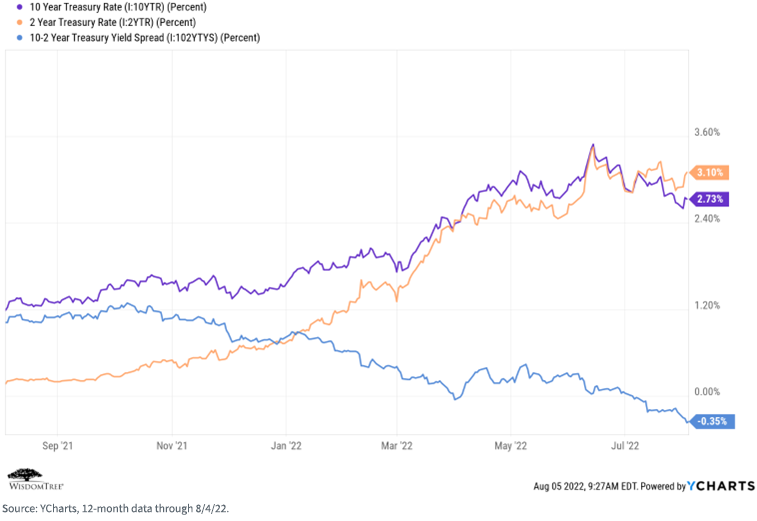 Historically, however, the spread between the 10-Year and 3-month Treasury rates has been a better predictor of recession. While this spread has narrowed, it remains positive. 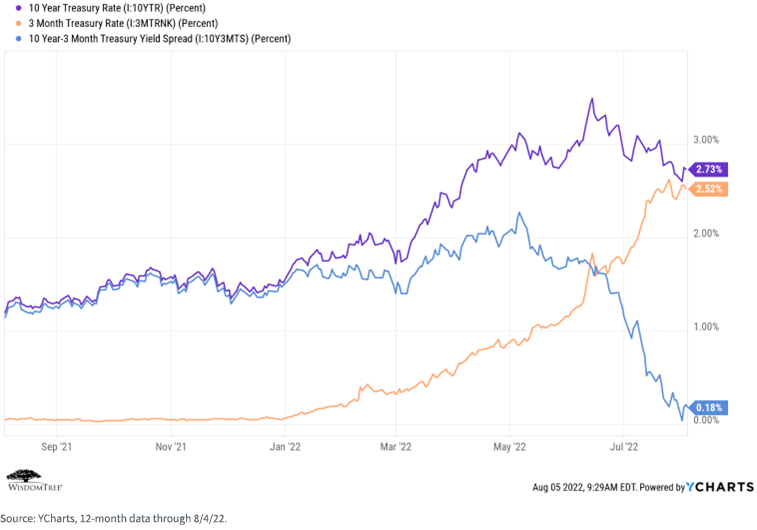 There is not much to love about the total return potential for bonds in 2022, but we believe there is relative value in floating rate Treasuries (as both an interest rate and duration hedge) as the Fed continues its rate hike regime. Given the flatness of the curve, you are not giving up much yield for staying on the short end, without taking the duration risk of the long end.

Credit spreads rallied over the past month or so and are once again in line with historical long-term averages. You might be able to generate a decent income level out of a bond portfolio again. Quality security selection, however, remains critical. 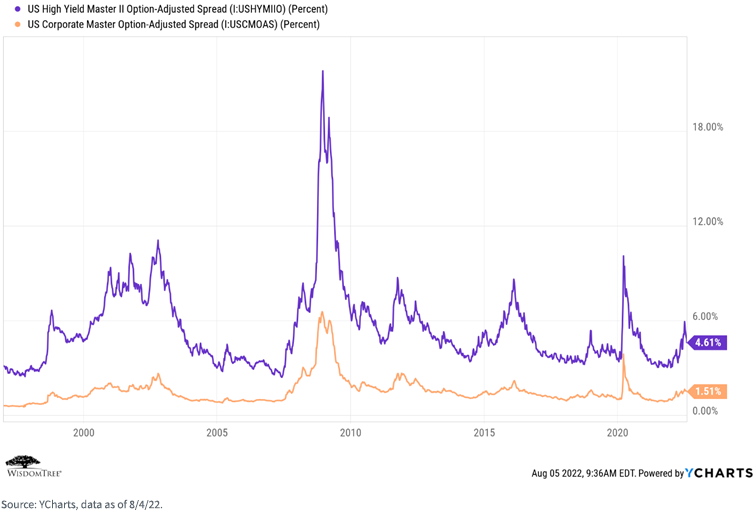 Translation: We remain short duration and overweight quality credit within our fixed income portfolios, relative to the Bloomberg Aggregate index. We are comfortable there for now and would rather be “late than early” to increasing duration—there’s not much to lose right now by staying shorter. Corporate balance sheets are solid and so we believe coupons should be safe, but the total return outlook remains minimal.

Inflation remains a primary economic issue so far in 2022. The Fed turned aggressively hawkish earlier in the year—to the point that there are concerns it may have to slow down or throw the economy into a premature recession. All eyes will be on Fed behavior and actions as we move through the remainder of 2022. There may be signs we are seeing—or soon will see—“peak” inflation levels, as the economy cools, supply chains re-open and oil prices stabilize. 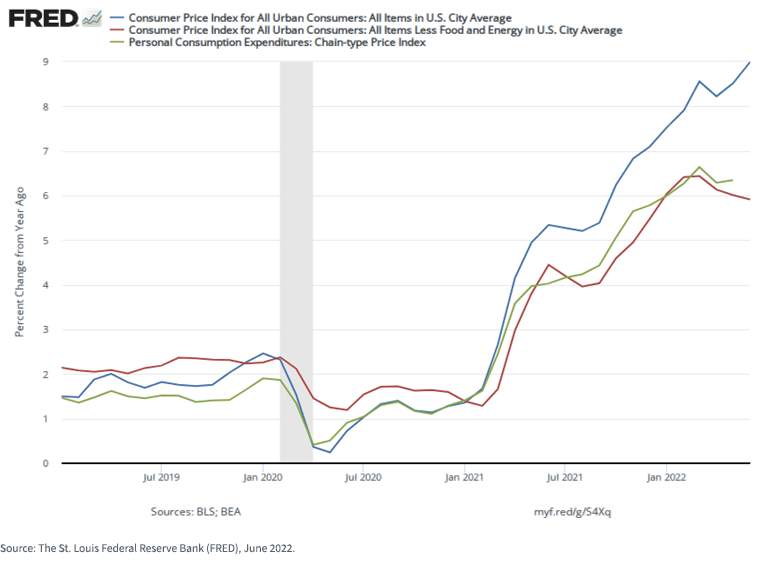 Global commodities have cooled significantly over the past months, as the market prices in a slowing global economy. China is using both monetary and fiscal stimulus to re-ignite its economy. If it is successful, we may see a bounce back in commodity prices.

For definitions of terms above, please visit the glossary.

Translation: Inflation remains a primary story of 2022—for now. But it may soon be supplanted by the economy. The Fed turned hawkish earlier this year and initiated an aggressive “rate hike regime.” But now it may rethink its policy in the face of (perhaps) peaking inflation and a (definitely) slowing economy.

We note that rising inflation is not just a U.S. phenomenon—it is global. Other central banks have also begun their own rate hike regimes (e.g., Canada, the Bank of England and the European Central Bank).

We see an interesting situation with respect to the Fed. In its latest “dot plot,” most members seem to be sticking to the rate hike regime. But the market may be pricing in a different outcome—one in which the Fed backs off if economic data continues to come in weaker and/or inflation seems to be easing. 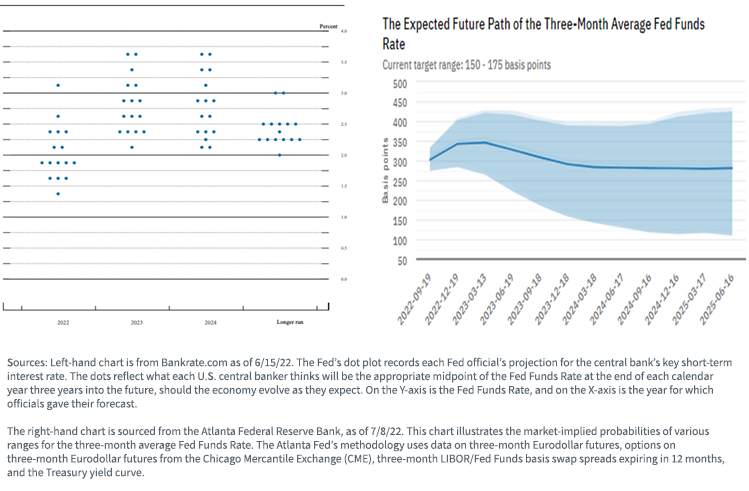 For definitions of terms above, please visit the glossary.

Translation: All eyes are on the Fed. Our base case is that the Fed will maintain its rate hike regime through this year but, despite its rhetoric, we think the Fed may back down should economic data continue to come in soft.

When focusing on what we believe are the primary market signals, the “condition our condition is in” is uncertain. Economic growth is slowing. Earnings are expected to fall but be mildly positive. U.S. COVID cases are increasing again (though with what seems to be a milder variant). Combined with high inflation, the ongoing Russia/Ukraine conflict, and increasing tensions between the U.S. and China, these are volatile and uncertain times.

We’ve already witnessed a significant factor rotation toward value and dividend stocks, both of which at least partially mitigated the broad market downturn in Q1. We think that trend will continue, but we maintain exposure to the growth factor across our portfolios.

So, while we perhaps are less pessimistic than others in our outlook for the remainder of 2022, we believe there will be increased volatility and we continue to recommend focusing on a longer-term time horizon and the construction of “all-weather” portfolios, diversified at both the asset class and risk factor levels.