Stagflation without the ‘Stag’

On the domestic economic front, I’ve received a lot of questions lately about the prospects for ‘stagflation.’ By definition, stagflation is a period of weak growth, if any, combined with high inflation. Based on the economic data available at this time, I would surmise that the ‘inflation’ part of this term is certainly on point, but I don’t see any visible signs of the ‘stag’ component.

To look at the U.S. economy’s last actual bout of stagflation, we need to go back to the 1970s. That brings to mind another key component to this economic condition: high unemployment. During the entire decade of the ‘70s, the average jobless rate came in at 6.2%, peaking at 9% in 1975 (see below). 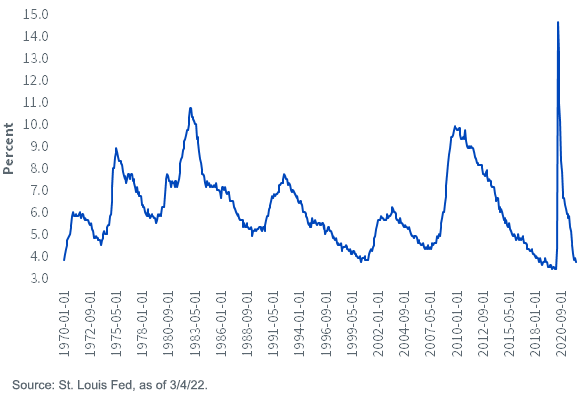 After looking at the February Employment Situation report, it is readily apparent the labor market backdrop here in early 2022 is light years away from the 1970s average. Indeed, the jobless rate fell to 3.8%, which is not only an historically low figure, but it brings the level back to the roughly 3.5%–4% range of before the pandemic (see above). This drop below the 4% threshold was the by-product of two very healthy developments: the civilian labor force and employment measures rising. In fact, the underlying employment data suggest that a jobless rate below 3.5% could very well be in the offing in the months ahead, certainly not an indicator that suggests a noteworthy growth slowdown is anywhere near imminent.

Historically low unemployment combined with solid wage gains should provide support for consumer spending and the economy as a whole. In addition, household balance sheets appear to be rather healthy as well, by any standard measure. That’s not to say I’m downplaying the negative tax effects from higher energy prices, but it is important to note these positive offsets from the consumer side of the ledger.

That brings us to the Fed, where the concern is the policy makers will raise rates too high and act as a catalyst for slower growth. However, keep in mind, the Fed’s starting point is beginning the process of removing emergency policy measures, where Fed Funds are essentially at zero and their balance sheet stands at an incredible $9 trillion. Even if Powell & Co. were to raise rates a quarter point at each of the remaining FOMC meetings this year, the Fed Funds range would still be at only 1.75%–2%. During the 1970s, the effective Fed Funds Rate peaked out at over 13%!

In other words, the Fed has a long runway for tightening before monetary policy could be considered in restrictive territory. The Chairman pro tempore made it very clear at last week’s Semiannual Monetary Policy testimony that “the Fed needs to be nimble and alert” in this difficult environment.

+ Can Powell Hit a Curve Ball?

+ Are Fed Funds Futures All They’re Cracked Up to Be?

+ Looking for Yield When Rates Are Rising