Well, here we are, starting a new calendar year. It always seemed strange to us that people evaluate the economy and markets based on calendar years since neither pays attention to our conventional calendar. But it is what it is, so here we go. For a deeper dive into our annual outlook, please check out our economic market outlook.

When reviewing the current state of the global economy and investment markets, we always recommend focusing on market signals and weeding out market noise. We believe the five primary economic and market signals that provide perspective on where we go from here are GDP growth, earnings, interest rates, inflation and Central Bank policy.

One of the WisdomTree narratives for 2023 is that the media discussion will increasingly turn away from “inflation” and more toward “recession.” We believe we will experience one sometime in 2023—perhaps not as soon as others believe, but ultimately. 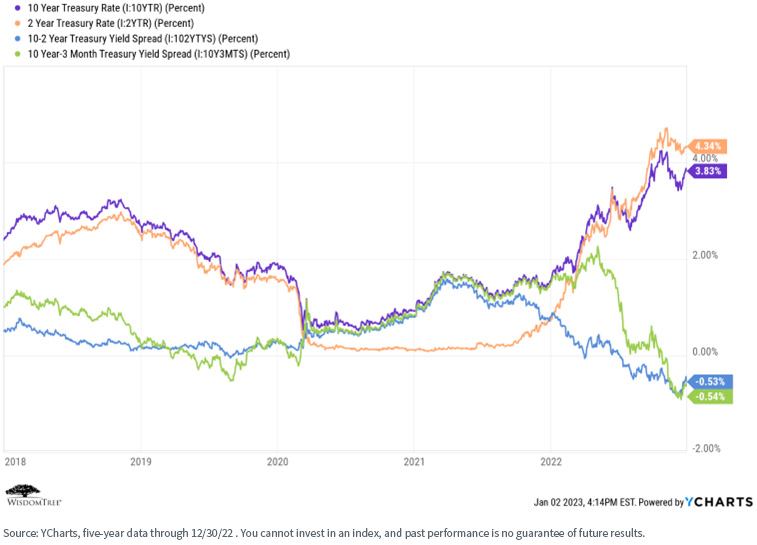 We see that the “10s/2s” has been inverted since roughly July 2021, while the “10yr/3mo” (historically the more accurate indicator of recessions) inverted only in October. Regardless, both are signaling the likelihood of a coming recession but, historically and importantly, with a ~6–18-month time lag. So, we believe we are headed there but perhaps not just yet, especially given the relative strength of the labor and retail sales indicators.

While some argue that elevated inflation will remain a primary concern in 2023, we believe it has peaked and will continue to fall through the year, especially if the Fed remains firm in its hawkish tone and narrative. [We note the headline CPI number is significantly impacted by housing and shelter data, which is generally subject to a ~6-month reporting lag. We believe that CPI would look much lower if current or contemporaneous shelter data (which is in free fall) was used.]

In fact, our belief that the primary discussion in 2023 will be the recession is based on the idea that the Fed will remain hawkish for too long, driving economic growth downward.

With that as a backdrop, it is not surprising that the consensus estimate for annual GDP growth in 2023 is muted, or that most analysts believe we will enter a recession at some point during the year.

Outside the U.S., continued economic stagnation in both Europe and China, combined with the ongoing Russian occupation of Ukraine, have all worked to lower global economic forecasts as well. 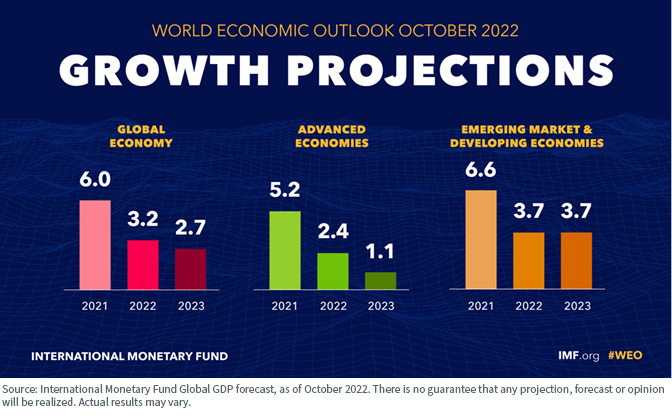 Translation: A recession appears to be on the horizon. Some “bears” suggest we are already in one, while the “bulls” argue that continued resilience in consumption and the labor market suggests we are not in one (yet). There remains positive economic news, but many indicators are declining.

We believe there may be potential for a Fed “pivot” toward a more accommodative monetary policy in the second quarter that may relieve recessionary pressure.

Our since-inception Senior Advisor Professor Jeremy Siegel also believes the pivot to rate cuts will be sooner than the market expects.

The overwhelming consensus is that 2023 will witness a sharp decline in earnings as economic activity slows down while wages continue their upward trend, combining to put significant pressure on operating margins. 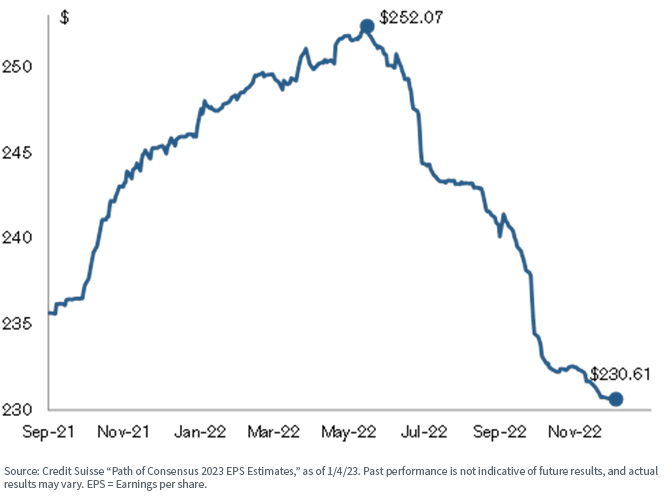 What is not priced into current U.S. valuations is the potential for earnings to not be as squeezed as expected because of increased productivity as companies trim their bloated payrolls and get rid of less-productive workers—this may result in a more-positive-than-expected earnings environment.

Outside the U.S., earnings expectations are mixed, with Japan and China expected to show muted but positive earnings growth, but the EM and Europe expected to show negative growth. Fundamental investors may find the relative valuations outside the U.S. to be quite attractive, especially if the dollar continues its recent slide. 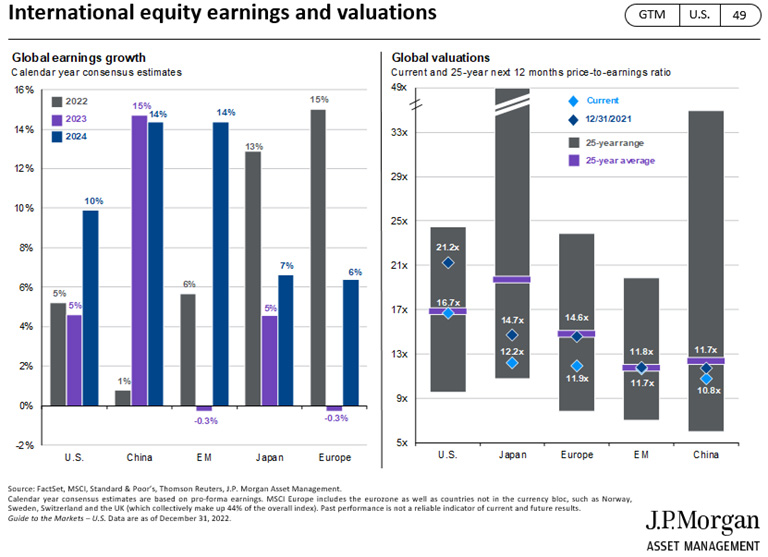 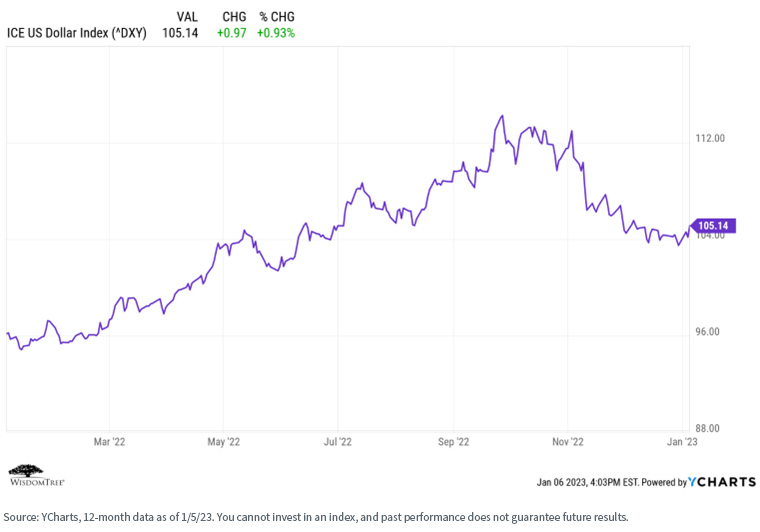 We saw a strong factor rotation away from growth and toward value and dividend stocks in 2022. We believe this trend will continue for quite some time.

In addition, small-cap stocks seem to have a recession already priced into their valuations and therefore may represent a very interesting opportunity in 2023.

We also believe “quality” (i.e., companies with strong balance sheets, earnings and cash flows) will become increasingly important as we sail into the potentially volatile seas of 2023.

The yield curve remains an item of intense focus these days. We discussed the level and shape of the curve above, but what about credit spreads?

Credit spreads have risen but remain within historical levels. This, combined with positive real rates across the maturity spectrum, translates into “there is income back in fixed income.”

Corporate balance sheets are in decent shape, so we expect that coupons should be safe. We recently increased the duration of our strategic fixed income model but remain short on duration relative to the Bloomberg Aggregate Index, as well as over-weight in quality credit.

We believe there is relative value in high-yield bonds, and given the shape of the yield curve, we still like floating rate Treasuries. 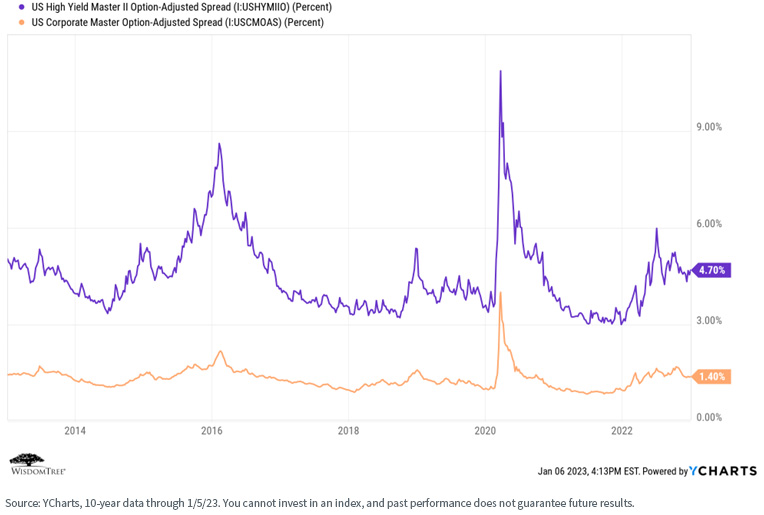 Translation: We recently slightly increased duration within our Fixed Income portfolios but remain short on duration and over-weight in quality credit relative to the Bloomberg Aggregate Index. We are comfortable there but paying closer attention to the duration trade.

When focusing on what we believe are the primary market signals, the “condition our condition is in” is uncertain. Economic growth is slowing. Earnings are expected to fall. The labor market remains strong, and consumer spending remains solid. Combined with higher inflation, the ongoing Russia/Ukraine conflict and a seemingly implacably hawkish Fed, these are volatile and uncertain times.

To summarize our primary investment themes and views for 2023:

That said, as strategic investors, we continue to focus on a longer-term time horizon and the construction of “all-weather” portfolios, diversified at both the asset class and risk factor levels.

For definitions of Indexes/terms in the charts above, please visit the glossary.