The results of protests by Foxconn workers, Guangzhou residents and students were mixed in many official pronouncements of loosening. Historians will debate what factors contributed to this shift, but financial markets have been ahead and more firmly convinced of the opening than many political observers. The Chinese Communist Party’s chief propaganda media, People’s Daily, has shown that even the largest propaganda machine can lag policy deliberation. China experienced a unique year in 2022 that could shed light on future policies.

A few thoughts on this development:

1. It’s a feature, not a bug: China’s policies could take place or reverse in an instant because it is a top-down political system. The continued political uncertainty over the future of President Xi’s hold on power will increase these policy volatilities.

Over one year, amid unprecedented negative Chinese headlines, MSCI China outperformed the S&P 500. In the first week of 2023, we also saw dramatic performance for China versus the U.S. market.

Even though the one-year performance is similar, Chinese equities experienced significant volatility, largely due to social-media-driven headlines.

2. Many China-related media headlines misread the Chinese government as well as the public.

For example, as protests swept across Chinese cities, comparisons were drawn to 1989. But the truth is, there is currently little widespread Chinese public sentiment protesting the Party and central government. A significant majority of the people support the Party, and there was strong support for Zero Covid until late 2022.

China’s local government has also become much nimbler in preventing protests from becoming bigger events. This was less reported, as the successful resolution of many daily protests does show some Chinese local government competency.

3. The 2023 China re-opening will lead to more travel and short-term consumption splurges but much fewer long-term household investments like housing.

Zero Covid, particularly after Omicron and Shanghai’s April 2022 lockdown, significantly constrained people’s choices of consumption. Many households did end up with high cash savings on hand. Many of those same households are also reluctant to put those savings into investments like housing or the stock market. So, overall Chinese revenge consumption will materialize in 2023. Its impact on many commodities will be positive, though not necessarily for the commodities tied to the housing sector.

However, housing is still constrained by the “for living and not for investment” mantra from top leadership. A lot of the current housing monetary policy support is for finishing current projects and avoiding the liquidity crunch of some failed developers—not a stimulus for the housing sector. The Chinese public’s expectation of housing continuing to have the never-ending price appreciation of the last 20 years has ended.

China’s M2 money supply has grown faster than credit as a result of people simply saving money instead of spending or investing it under Zero Covid.

China’s freewheeling capitalism of the last 20 years is coming to an end, with a new constraint that puts China in broad competition with the U.S.

Government policies will also tilt toward broad sectors like high-end manufacturing, new energy and health care. Private businesses will still dominate because the Zero Covid policy shift showed that the government realized it can’t achieve its goal of competition with the U.S. without private businesses, which are more than half of the Chinese economy and contribute most of the innovation and hiring. 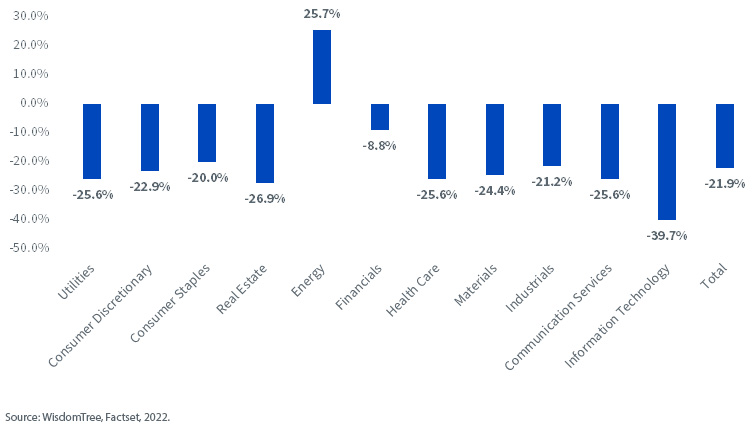 Some China tech regulations are coming to an end, like the investigation of several platform companies. There is a high chance that the ride-sharing company DiDi, which voluntarily delisted from the NYSE, will be allowed to list in Hong Kong or on the mainland again. But antitrust regulations, or regulation on systematic financial risk, are not done and will continue.

In summary, there are points of optimism for Chinese equity, most importantly showing that it is investable. Viewing China in the same way as Russia underestimates China as a competitor. 2023 will be a special year to observe, as President Xi will have only loyalists in his government for the first time, a rare situation in China since the premier is usually arranged to counteract the presidency. Early March, when the new administration is sworn in and the GDP, debt and deficit targets are set, could give an indication of 2023’s economic trajectory.

We encourage investors to keep up to date on the risks and rewards of investing in China through our blog, podcast and Twitter.