Last month, I had the privilege of visiting the New York Stock Exchange to hear Japanese Prime Minister Fumio Kishida address investors while in town for the U.N. General Assembly. Japanese markets have piqued interest this year, owing to staggering weakness in the yen and the Bank of Japan’s (BOJ) commitment to accommodative monetary policy while other central banks become increasingly restrictive to combat record inflation.

It marked a timely opportunity to hear Prime Minister Kishida’s thoughts about the yen’s 23% slide versus the dollar this year, and more importantly, about the role of Japan’s central bank and government in supporting it going forward. Just hours before Kishida’s address, the Japanese Ministry of Finance (MOF) intervened in FX markets for the first time since 1998 to support the currency. Prior to intervention, the yen traded around ¥145 per dollar and fluctuated around ¥141 shortly afterward. A few weeks later, it has given up its gains entirely and is currently approaching ¥150. 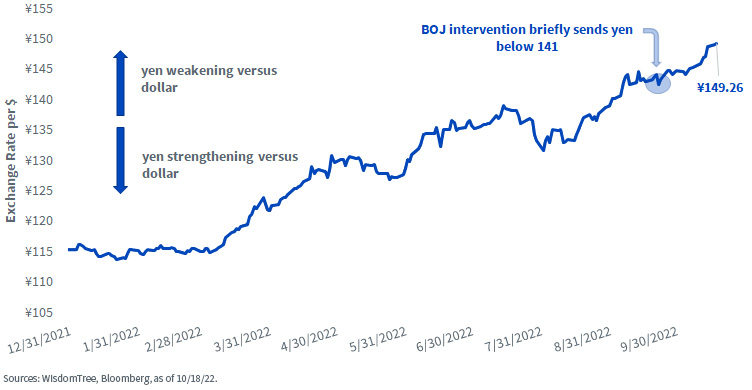 The support was a brief reprieve from prevailing headwinds for the yen, which has been challenged this year amid the BOJ’s commitment to accommodative policy. Japanese short-term rates remain in negative territory, and yield curve control has capped longer-term bond yields. Earlier this week, the BOJ conducted an emergency bond-buying operation to keep yields near its policy ceiling.

But the prime minister spoke of another catalyst that forced the MOF to intervene: speculative bets on the yen. Kishida affirmed his belief that currency markets should determine FX rates but reiterated that it may be necessary to respond to speculation, especially to the extent that it creates undue volatility.

The prime minister has a point. According to Commodity Futures Trading Commission (CFTC) data, net short non-commercial positions in yen futures have grown since late summertime and held their ground ever since. Over that timeframe, the currency weakened by about ¥18 per dollar.

This marked a reversal from the early summer’s unwinding of short positions. The most recent contract data remains deeply negative despite September’s intervention. Non-commercial yen positions have also remained net short since March 2021. 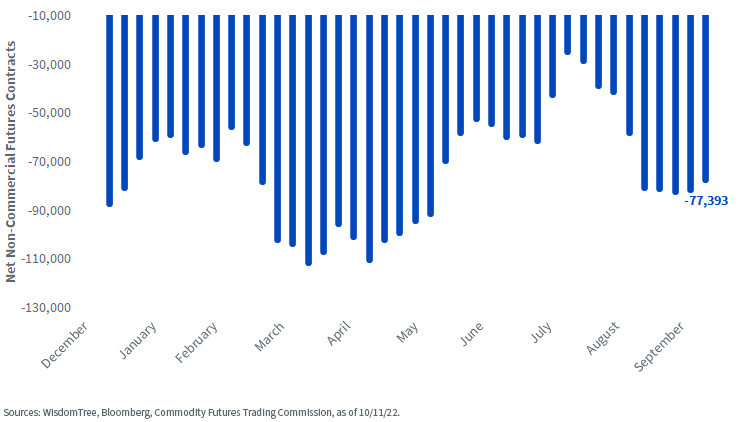 But no matter the direction of the yen or catalysts for its movements, Prime Minister Kishida’s implication was clear. Japan will continue to intervene as appropriate to stabilize the yen against what it perceives to be undue speculation and attendant volatility.

It likely hopes that the threat of further intervention in FX markets may scare off yen bears as well, though one month later, the intervention has had the opposite effect of stoking more volatility. Speculators continue to test the resolve of the MOF and the BOJ’s policy commitment, with the yen selling off further as it approaches ¥150.

Yen weakness has historically been a tailwind for equities due to the export orientation of the Japanese economy, resulting in a negative correlation over the medium and long term between yen and equity market returns. 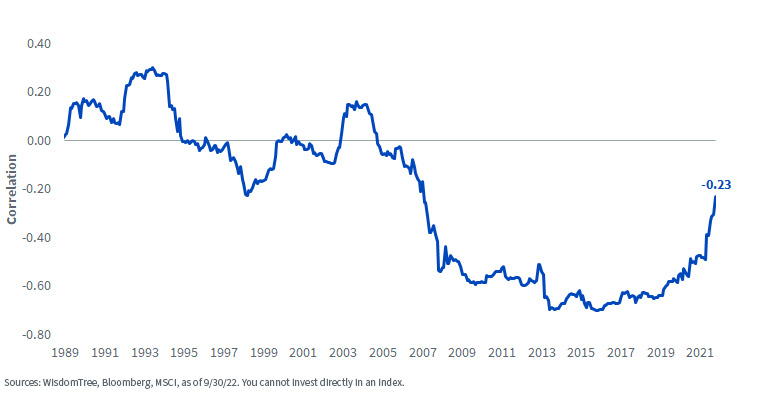 This year’s weakness results from traders shorting the currency over the policy divergence between the U.S. and Japan, which will only widen with the Fed poised to continue raising interest rates while the BOJ remains idle. This may provide yen speculators with the confidence to continue challenging the BOJ’s reactionary interventions.

However, we know neither the frequency nor the magnitude of further intervention from the MOF, much less where that will leave the yen over the short-to-medium term. Given the uncertainty amid opposing forces playing “tug-of-war” with the yen, we prefer a hedged approach to Japanese equity allocations, particularly with a focus on exporters.

The Japanese equity market contains a healthy mix of export-oriented businesses already, but seven of the 11 GICS® sectors still receive over half their revenue from within Japan. 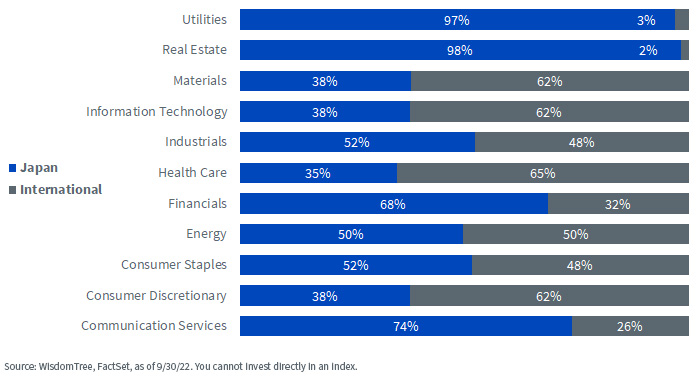 Some of that is due to the nature of the sectors themselves, but in a weak yen environment for the foreseeable future, it may be beneficial to have an over-weight allocation to exporters. The WisdomTree Japan Hedged Equity Fund (DXJ) allocates to dividend-paying, export-oriented companies who derive less than 80% of their revenue from within Japan, resulting in greater revenue diversification compared to the MSCI Japan Index.

By design, DXJ also tends to have over-weight exposure to Japan’s most export-focused sectors while maintaining under-weight exposure to those more dependent on domestic revenues. For example, Materials and Consumer Discretionary are more dependent on international revenues than domestic receipts and have been historically over-weighted in DXJ due to its export-focused methodology.

My colleague Jeff Weniger has been writing about equity premiums in Japan, and how it is now a global outlier. Japanese equities, proxied by DXJ's underlying Index, currently offer an 11.5% earnings yield advantage over 10-Year Japanese Government Bonds (JGB), owing to long-term yields capped by the BOJ’s commitment to yield curve control. The Index currently trades at a price-to-earnings multiple below 9, providing an earnings yields near 12%. 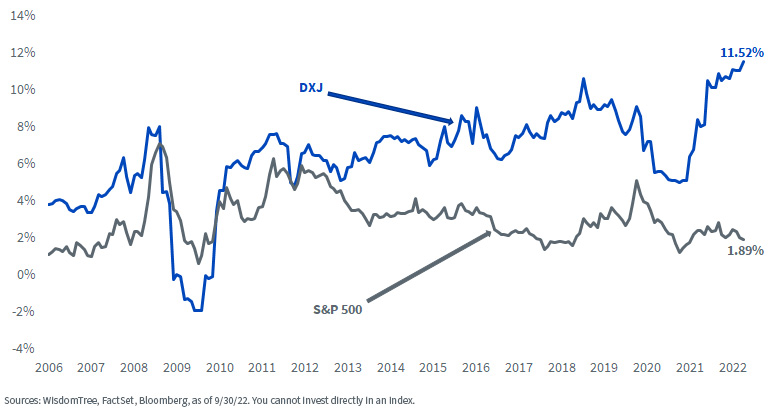 This illustrates the policy divergence from the U.S., which has widened over the past 10 years as ripple effects from changes in Fed policy have impacted the bond market. Should the relationship change in the future, compression may come from rising bond yields if the BOJ changes its stance, but an 11.5% premium with bond yields currently near zero is a sizable opportunity.

DXJ is also 100% currency-hedged, completely erasing any fluctuations in the yen-dollar exchange rate so that total returns are solely determined by equity performance. More importantly, this enables investors to avoid magnifying the effects of the ongoing yen tug-of-war in their Japan allocations.

There are risks associated with investing, including the possible loss of principal. Foreign investing involves special risks, such as risk of loss from currency fluctuation or political or economic uncertainty. The Fund focuses its investments in Japan, thereby increasing the impact of events and developments in Japan that can adversely affect performance. Investments in currency involve additional special risks, such as credit risk and interest rate fluctuations. Derivative investments can be volatile and may be less liquid than other securities, and more sensitive to the effects of varied economic conditions. As this Fund can have a high concentration in some issuers, the Fund can be adversely impacted by changes affecting those issuers. Due to the investment strategy of this Fund it may make higher capital gain distributions than other ETFs. Dividends are not guaranteed, and a company currently paying dividends may cease paying dividends at any time. Please read the Fund’s prospectus for specific details regarding the Fund’s risk profile.