There's Income Back in Fixed Income

Since I’m a “bond guy,” there is little doubt about what I think has been the biggest headline for the markets this year: rising rates. Arguably, I’m also thinking I won’t get much pushback on that conclusion either. As investors grapple with continued inflation, recession fears and a Federal Reserve that is “committed” to bringing down price pressures, an interesting development has occurred that has not garnered much in the way of headlines; i.e., it looks like “income” came back to fixed income.

Since the Fed first implemented its “zero interest rate policy” in the wake of the financial crisis, investors have been left with a bond market landscape that presented many challenges from an income perspective. Even after the Fed normalized monetary policy during the 2017–2019 period, interest rates remained at historically low levels. That development was only exacerbated by the COVID-19 lockdown and subsequent policy response. 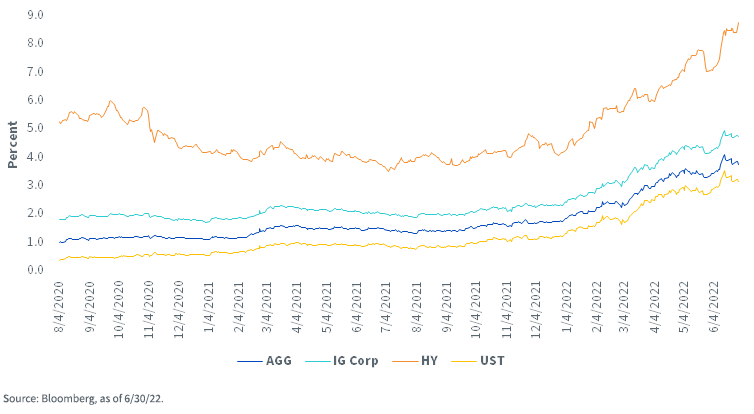 With the dynamic duo of inflation and a Fed tightening policy, interest rates really had nowhere to go but up this year, and that’s precisely what has occurred across the fixed income spectrum. To provide perspective, as of this writing, the Agg’s yield to worst (YTW) has risen more than 200 basis points (bps), but even more noteworthy has been the increase in high yield of nearly 460 bps.

The interesting portion of this discussion is where these rate increases have placed absolute yield levels. With respect to the Agg, the YTW is now at roughly 3.80%, the highest reading since 2009. For U.S. investment-grade corporates, a similar story has ensued, as the current level of 4.75% also hasn’t been witnessed in almost 13 years. Within the U.S. high yield arena, outside of the two risk-off periods of early 2016 and the COVID-19-related shutdown, yield levels are now approaching the 9% threshold at 8.80%, the highest reading since 2011. As recently as July of last year, the YTW was only about 3.50%.

I’ve continued to emphasize the prospects for a “fluid” and volatile fixed income investment landscape for the remainder of this year, if not into 2023. Based on Chair Powell’s recent comments, the Fed seems determined now to bring down inflation and “accept the higher recession risk” that comes with the territory. For investors seeking income, the increase in bond yields in 2022 has provided investors with a bit more of a “traditional feel” for fixed income portfolios than what has been available within the last decade or so.

+ Looking for Recession Clues in All the Wrong Places?