The beginning of 2022 has presented a challenging investment environment for U.S. investors, who are now forced to contend with an equity landscape vastly different from the secular bull market they enjoyed since the onset of the pandemic.

In an environment distinguished by persistent inflation, geopolitical conflicts, supply chain disruption, and the tacit understanding that the Federal Reserve will soon begin monetary tightening, investors are beginning to scrutinize equity positions more closely than before. Increasingly, they are opting for profitable companies with healthier fundamentals versus the profitless, growth-oriented winners of yesteryear.

Checking the Health of Small Caps

This effect is already apparent in the U.S. small-cap market. Although small caps have suffered in tandem with the broader market, there was notable outperformance to begin the year among small-cap indexes with an explicit focus on profitability and an implicit focus on modest valuations.

The Russell 2000, an approximate gauge of the U.S. small-cap market, neared correction territory in by the end of February, as risk-off appetite finally disciplined the speculative fervor that distinguished the last two years. But the S&P SmallCap 600, and the corresponding value segments of both these indexes, didn’t suffer the same fate.

One reason for this outperformance may be related to profitability. The S&P indices explicitly focus more on profitable companies with healthier balance sheets than the Russell 2000, which also includes a broad swath of unprofitable companies.

The health differential between these indexes is also evident when you look at interest coverage ratios, which signal the extent to which a business can service interest obligations on its debt using earnings before interest and taxes (EBIT). Higher multiples indicate a better ability to pay debt.

The S&P index is fundamentally stronger by design when looking at this measure relative to the Russell 2000.

Another reason for the outperformance may be related to valuations. After all, investors enthusiastically dumped shares of richly-valued growth and technology names to start the year, leading many growth indexes near, or past, correction territory.

The small-cap market performed in sympathy with this trend: high-valuation indexes fell further than their lower-valuation counterparts. The Russell 2000, with price-to-earnings (P/E) and estimated P/E (forward P/E) ratios of 32x35 times and 23x27 times, respectively, suffered more than the S&P SmallCap 600, with its strong profitability, lower valuation and focus on healthy balance sheets.

The reason for this may also be related to the S&P indexes’ focus on healthy balance sheets and operational efficiency. Higher earnings, and the potential for higher earnings in future periods, are a direct result of maintaining efficient and productive operations, complete with sound and sustainable business models. Better profits thereby reduce valuation ratios, so that investors are not inherently paying more per dollar of earnings than they would for lower quality businesses.

Launched in 2007, the WisdomTree U.S. SmallCap Fund (EES) can potentially address the pitfalls that impacted the small-cap market to start the year. As an earnings-weighted Fund, it directly addresses profitability and valuations by explicitly targeting profitable companies over the unprofitable ones that afflict the greater market. A by-product of that is potentially lower valuations, since higher earnings would result in reduced P/E and forward P/E ratios, all else being equal. 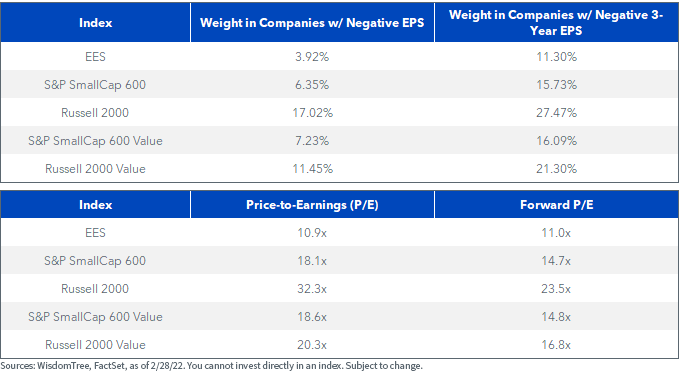 There’s potential for improved balance sheet health as well since weighting by earnings naturally skews toward companies with higher profits that may be more likely to service their debt. The interest coverage ability of EES surpasses that of both the Russell and S&P indexes.

One final point relates to sector weights. The winning trades of the last two years often involved Information Technology stocks, which have been clobbered to begin 2022. EES may have remained a bit more immune to the selling pressure because of its relative under-weight allocation in tech names versus these two indexes.

Likewise, EES is established more in the Financials and Consumer Discretionary sectors, both of which are more cyclical in nature and tend to be leveraged to economic growth. These positions may be additive in today’s market. For example, rising interest rates, which we’ve already seen to begin the year, may provide a tailwind to financial stocks.

Overall, the market’s reversal from last year’s trends is already underway, but still in early stages. We think there is an opportunity to reassess small-cap allocations in favor of a position that will emphasize earnings, balance sheet health and lower valuations relative to the broader market.

There are risks associated with investing, including the possible loss of principal. Funds focusing their investments on certain sectors and/or smaller companies increase their vulnerability to any single economic or regulatory development. This may result in greater share price volatility. Please read the Fund’s prospectus for specific details regarding the Fund’s risk profile.