Sometimes it takes the fear of inflation—our collective focus on it—to make the phenomenon a consistent reality.

You see prices go up, again and again, and eventually start to get in front of it. Pick up four cans of soup now, not two. Or you swing by the auto parts store for a bottle of fuel injector cleaner, but you choose the three-pack instead of the single bottle. Your action—giving a jolt to demand over and above your pre-inflation tendencies—sends the price of soup and fuel injector cleaner higher.

Then the day comes when your neighbors, who weren’t previously paying attention, notice too. There is an element of fear to their demand bump, or at least a sense of irked urgency.

Fortunately, outside of Twitter discourse, inflation is not yet in our collective culture—not like it was in the 1970s and early 1980s. Back then, the topic could very well be in the script of your favorite sitcom.

Marvin Gaye, the Motown legend, was already singing about price pressures as early as 1971, two years before the first oil crisis shocked the country. In “Inner City Blues,” which Gaye took to the top of the Billboard R&B chart, inflation gave him “no chance to increase finance.”

In 1975, Harold Melvin & the Blue Notes found a hit with “Bad Luck,” lamenting that “prices have been goin’ up on things” and pointing the finger at President Gerald Ford.

Seven years later, Hank Williams, Jr. might have been checking his portfolio when he took “A Country Boy Can Survive” to number two on the 1982 Billboard Hot Country Singles chart. In that ode to resilience in the face of a cold world, “the interest is up and the stock market’s down and you only get mugged if you go downtown…”

In comedy, Dan Aykroyd found stardom in the late 1970s by impersonating President Jimmy Carter on Saturday Night Live, with his most memorable “speech” imploring the public to embrace inflation, to be happy about it. Movie director John Landis was so enamored with Aykroyd that he cast him alongside another comedic legend, Eddie Murphy, in the 1983 blockbuster comedy Trading Places, which centered on the once-mundane world of commodity trading.

Though my knowledge of 2021’s pop music and movies leaves much to be desired, my inkling is that the current cultural narrative is not yet one of inflationary malaise.

But that time may be coming.

A friend from another state stopped by for dinner the other night. At the table, he inquired whether we too were seeing higher meat prices at the supermarket. Why yes, yes we are. That was twice in one week that the Weniger kids had to sit through a lecture on cattle supply dynamics; I was studying the trucker shortage at length a few days prior.

I know that few people outside our business spend their free time studying monetary aggregates. But people get what is going on. They know that 2020 and 2021’s COVID-19 largesse was abnormal. They know that $1,400 stimulus checks, front-loaded child tax credits and unemployment top-ups were something new, maybe something that caused them to spend more than they used to.

No surprise then, figure 1. 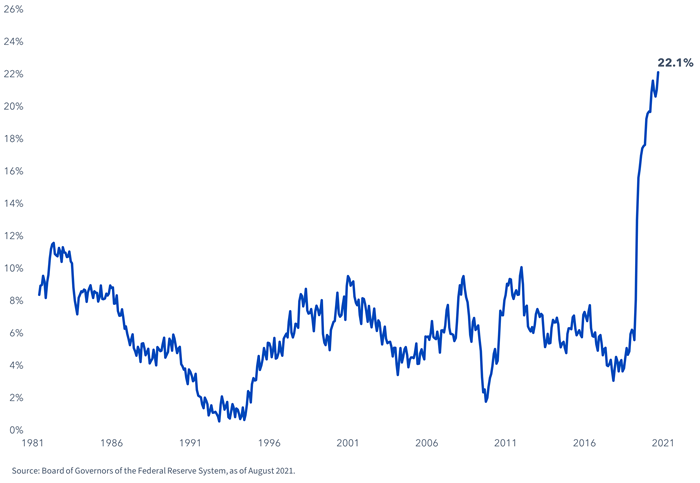 Consider the public’s inflation forecast for the next 12 months. It has not been this high since the years before the global financial crisis, when oil shot well north of $100 per barrel (figure 2). 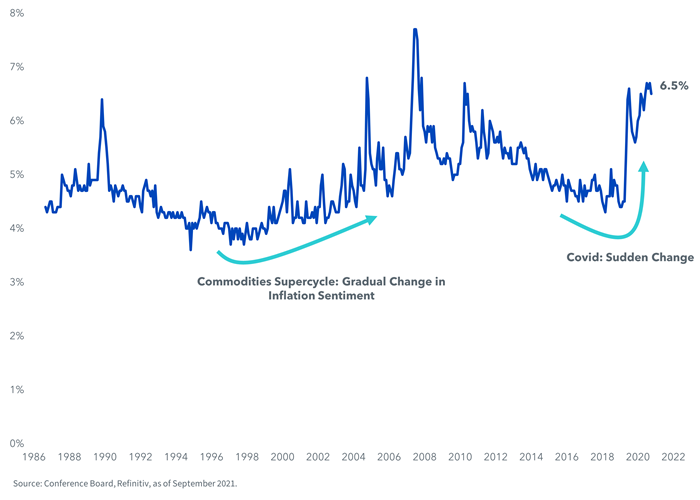 Though it is not our base case, stagflation is a prospect making the rounds and should at least be entertained. With the headline Consumer Price Index (CPI) showing annualized growth of more than 5% for several months running, it is unnerving that the Atlanta Fed GDPNow gauge has slipped to +0.5%. That moribund figure is corroborated by the recently released advance estimate of Q3 GDP, which showed the economy growing at an annualized pace of 2.0%.

Here is a non-zero probability for, say, 2022’s first half: perhaps a situation where headline unemployment is working its way down to the mid-4% range and prices of goods and services are still running higher, while economic growth struggles to hold the zero-line.

I think reasonable people can entertain such a scenario.

If this environment is anything like the 1970s, with Marvin Gaye kicking off the commodities cycle in 1971 and Dan Aykroyd and Eddie Murphy ending it in 1983, then the fact that it hasn’t even shown up in music and film may mean that 2021’s bout of inflation could be just the first stage of something that lasts for a long time.

Investors who are conducting a search for commodities should take a look at the WisdomTree Enhanced Commodity Strategy Fund (GCC).

There are risks associated with investing including possible loss of principal. An investment in this Fund is speculative, involves a substantial degree of risk and should not constitute an investor’s entire portfolio. One of the risks associated with the Fund is the complexity of the different factors that contribute to the Fund’s performance. These factors include use of commodity futures contracts. In addition, bitcoin and bitcoin futures are a relatively new asset class. They are subject to unique and substantial risks, and historically, have been subject to significant price volatility. While the bitcoin futures market has grown substantially since bitcoin futures commenced trading, there can be no assurance that this growth will continue. Derivatives can be volatile and may be less liquid than other securities and more sensitive to the effects of varied economic conditions. The value of the shares of the Fund relate directly to the value of the futures contracts, and other assets held by the Fund and any fluctuation in the value of these assets could adversely affect an investment in the Fund’s shares. Please read the Fund’s prospectus for specific details regarding the Fund’s risk profile.

+ We Aren't Done with Inflation