Plenty of Price, Not Much Sales

In part 1 of this two-part blog series, “The Bond Market’s Sell-Off Is Taking Out the Stock Market’s Leaders,” I discussed the trouble currently confronting several mega-cap growth companies. Now let’s look across the entire S&P 500.

Last year, I penned a piece called “The Ghost of Sun Microsystems,” digging into the history of one of the tech bubble’s most legendary computer company’s stocks.

Two years ago we were selling at 10 times revenues when we were at $64. At 10 times revenues, to give you a 10-year payback, I have to pay you 100% of revenues for 10 straight years in dividends. That assumes I can get that by my shareholders. That assumes I have zero cost of goods sold, which is very hard for a computer company. That assumes zero expenses, which is really hard with 39,000 employees. That assumes I pay no taxes, which is very hard. And that assumes you pay no taxes on your dividends, which is kind of illegal. And that assumes with zero R&D for the next 10 years, I can maintain the current revenue run rate. Now, having done that, would any of you like to buy my stock at $64? Do you realize how ridiculous those basic assumptions are? You don’t need any transparency. You don’t need any footnotes. What were you thinking?

I guess we could say that Sun Micro had plenty of price, but not much sales. 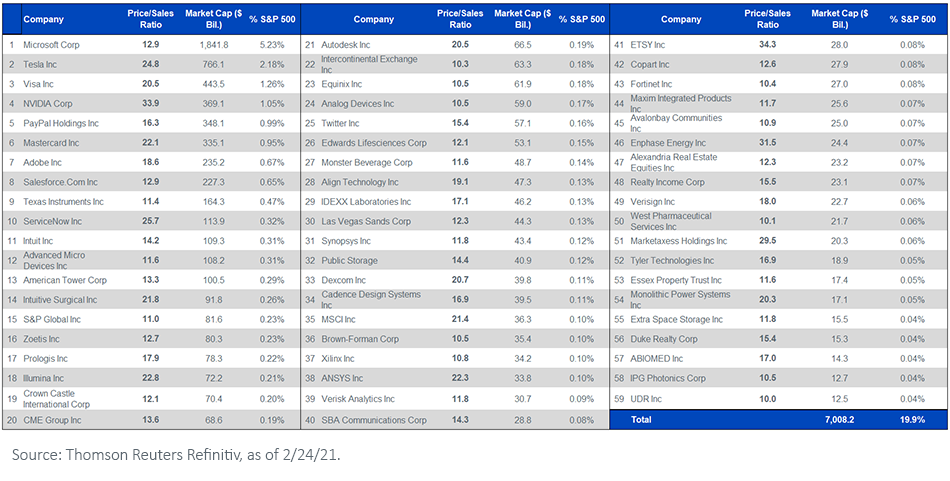 Such valuations are likely a by-product of the “TINA” trade—own stocks because “There Is No Alternative” in a low-rate world. It worked famously when the bond market rallied for years on end.

What happens when the bond market goes the other direction?

Fixed income’s red ink may just be getting started. Even after about a half year of yields rising, the 10-Year U.S. Treasury yield has not yet flirted with 2%; it remains 43 basis points lower than the average inflation rate of the last three years.

With Brent crude oil attacking $65 and U.S. home prices up 11% over the last year, to name just two inflation indicators, it may be wise to recall that the 10-Year t-note touched 3.24% as recently as November 2018.

Take it closer to home, to expectations for inflation in the next few years. The bond market anticipates annual price increases of 2.37% between now and 2026 (figure 3).

Meanwhile, in figure 4, the 30-Year Treasury bond appears to be doing one of two things:

2) Bracing for years of imbalanced budgets in Washington

In contrast, the 2-Year Treasury yield’s slow drift lower could be a pointing to a “Snoring ’20s.” 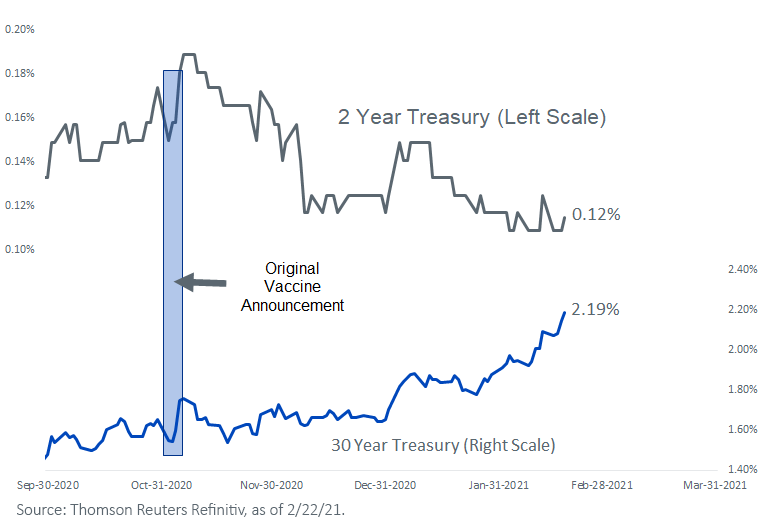 Quizzically, the Street expects the Federal Reserve (Fed) to hold off on rate hikes until the cows come home, yet the consensus also expects the labor market to be on fire, with just 4.6% unemployment in 2022. It’s hard to conceptualize how the Fed can continue to pin short rates at zero if jobs bounce back that strongly.

At the rate that commodities and house prices are surging, expectations for an accommodative Fed could get dashed. A newfound pivot to a rising rate regime—in both short and long rates—makes assets that promise distant cash flows look vulnerable, owing to the math behind present value calculations.

Stocks that trade for 10, 20, 30 times sales, many based on hopes and dreams of robust profits in 2025 or 2030 or beyond, may look appealing to some investors when Treasury rates are 0% or 1%—because future fortunes can be discounted at a tiny cost of capital.

But send interest rates up a point or two and the math changes.

If and when the five dozen or so companies in the S&P 500 with a price-to-sales ratio above 10 fall out of favor, it may be stocks with nearer-term cash flows that get the last laugh.