The Next Test for U.S. Dividends

For European bank regulators, the answer is yes.

Most major European banks have suspended share buybacks and dividends since being directed by regulators to do so in March.

This coordinated decision provided cover for the weakest banks to slash payouts. It was also good PR for regulators, since the cuts are perceived as providing greater capacity for lending to struggling small businesses and households.

For U.S. regulators, the answer to this question has been “wait and see.” Federal Reserve (Fed) Chair Jerome Powell has opposed a blanket ban, saying the banks are “highly capitalized, with more high-quality capital than before the financial crisis.”

Some notable differences between U.S. and European banks have influenced divergent dividend paths:

But perhaps the biggest reason for the lack of regulatory action on U.S. dividends is the Fed’s annual stress tests that determine dividend decisions. The results of these tests will be released on June 25, giving the Fed the opportunity to make assessments that are specific to each bank’s capital distribution plans.

This approach, rather than a wholesale ban on dividends, enforces the Fed’s faith in the stress test process.

Financials have been the second-worst performing sector in the S&P 500 this year. Most banks recorded billions in loan loss provisions during the first quarter, with further losses expected in the second quarter.

These losses, and a uniform suspension of share buybacks from the largest banks that was made in March, have weighed heavily on the sector’s performance. 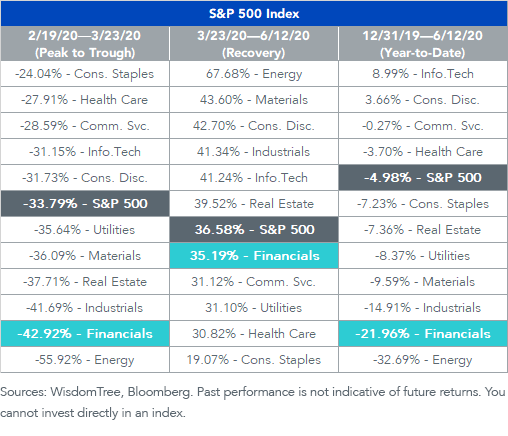 More recently, investors have questioned if dividend cuts will follow as a result of the deteriorating economy. The list of advocates for banks halting dividends is distinguished, including former Fed Chair Janet Yellen.1

Entering 2020, Financials offered the highest total shareholder yield (dividends + net buybacks), but more than two-thirds of their payouts came from buybacks. This is why the decision by the banks to suspend buybacks in March was more important to preserving capital than slashing dividends. 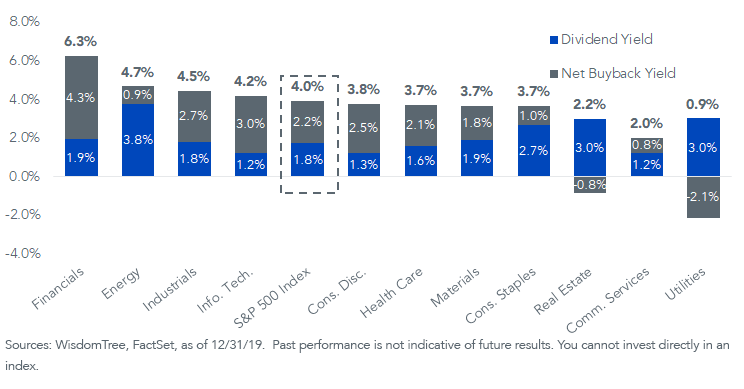 If we look at the total payout ratios for the eight U.S. global systemically important banks (G-SIBs), the average payout was 121% for 2019. That means that, on average, the banks paid out more than 100% of their earnings on dividends and share buybacks.

However, the average dividend payout ratio was only 29%, which was well below the 43% for European G-SIBs.

Wells Fargo (WFC) paid out the highest dividends and looks to be the most at risk of having its dividend cut. 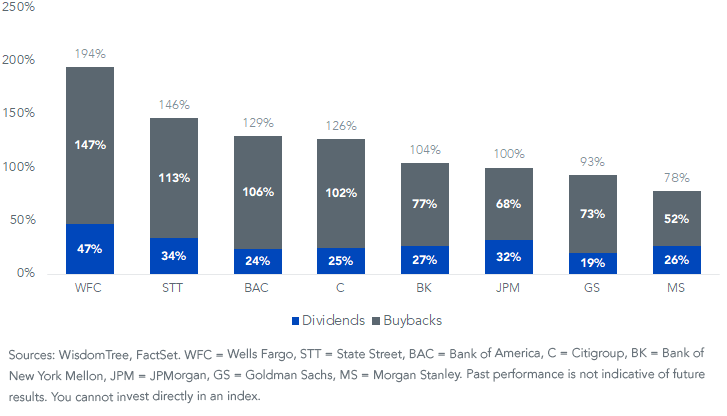 According to Goldman Sachs, the options market implies an average dividend cut of 32% for 2021 dividends for large U.S. banks relative to the trailing 12 months—WFC had the highest cut expectation with a more than 60% implied cut.2

Based on Goldman’s own forecast, WFC will be the only bank forced to pare back its dividends from 1Q20 levels.

Should the Fed allow banks to maintain, or even increase, dividend payouts, it could be a positive catalyst for Financials—and for many of the value indexes that are over-weight the sector.

The WisdomTree U.S. LargeCap Index is a value-tilted index with an over-weight of about 6% in Financials relative to the S&P 500.

The Index weights the 500 largest profitable U.S. companies by earnings. Because of the cyclicality of earnings for banks, and the currently depressed expectations for their near-term earnings, the large banks all have lower weights in the market cap-weighted benchmark than in the earnings-weighted index.