Figure 1: The One about the Airlines 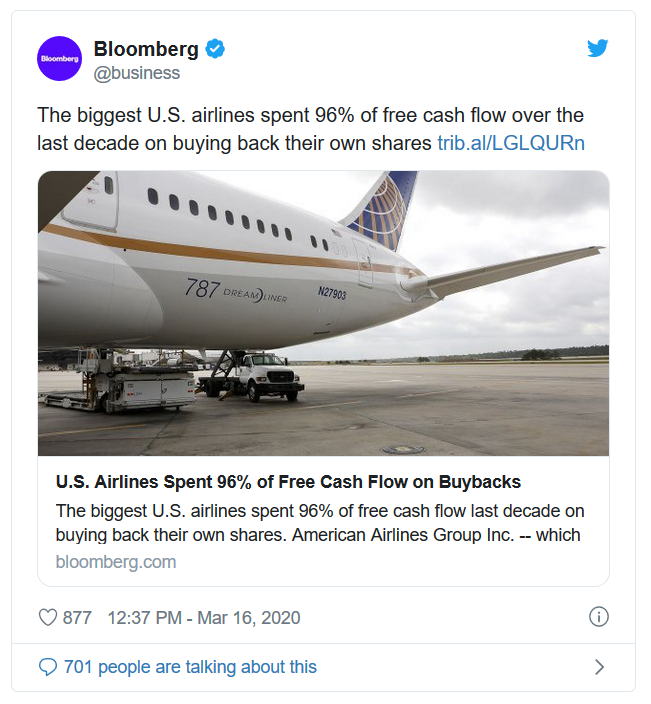 If you’re on Twitter enough, you’ve seen some variation of this. Personally, I think I came across it 50 different times from 50 different Twitter accounts. Companies that bought back stock, then turned around and accepted government bailouts, were not treated kindly. In the 12 months to May, the $27.5 trillion worth of companies in the S&P 500 Index distributed $522 billion in dividends, but that was actually lower than the buyback total (figure 2). 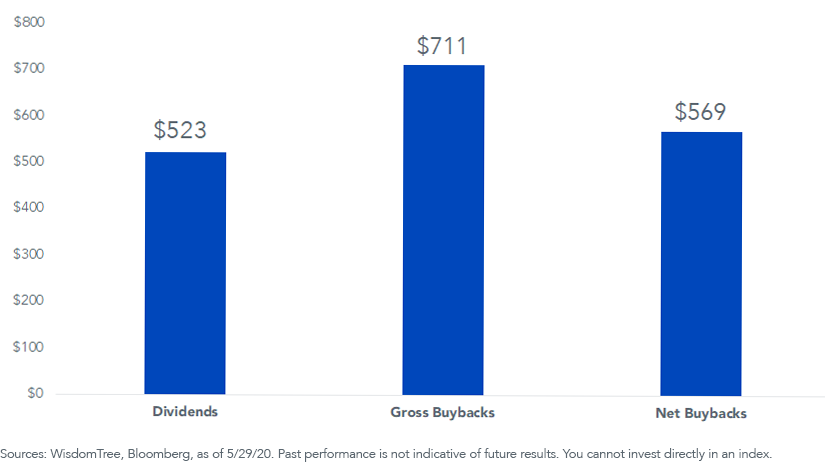 Imagine you’re the CEO of a large corporation that went into total—or even partial—shutdown, and the time comes to take out the scalpel. In almost all cases, the buyback program is cut before the dividend.

That is because you can’t “see” buybacks. Sure, people like you and me, who live for this stuff, we see the buybacks. But that’s not the case with every shareholder on the roster. The local charity that you volunteer for has a small portfolio of stocks, but everyone on that board is looking at the income, making sure it’s enough to fund the local swimming program or repaint the school. Nobody in that crew is parsing through 10-Ks to see if Coca-Cola is or is not engaging in a buyback program.

How about the banks? The Lehman lesson was learned, and their reputations are still in tatters. The decision is easy: out with all buybacks until July 31, with maybe a rolling extension thereafter, at least for the majors.

But the dividend? Sacrosanct, at least in American culture. Jamie Dimon, JP Morgan CEO and unofficial decisionmaker for the U.S. banking system, stated that he would only cut or suspend the dividend if Q2 GDP declined 35%. Since the economy seems to be improving, that is all the more reason why banking sector dividends, which weren’t cut in March or April or May, don’t appear to be particularly vulnerable this summer.

In the case of current societal business distress, there is a pecking order for what gets slashed to top up the balance sheet. For firms that have both a buyback program and a dividend, draw a line through the former. A chunk of the $711 billion in last year’s gross buybacks is unlikely to occur in a shaky economy.

Now, the dividends. For an idea of a benchmark, S&P 500 dividends declined 27% in the global financial crisis (GFC).

There is actually a dividend futures market for the S&P 500. The Street anticipates that about $6 will be lopped off this year, bringing 2020 dividends to $54.70. Considering the extent of WisdomTree’s dividend business, you won’t be surprised to learn that I’ve been watching these futures closely; after being “sticky” for several weeks, expectations are rising.

The damage—as far as market expectations are concerned—continues into 2021. The worst-case scenario in 2021, if dividends bottom at $50.90, is a 16% total contraction. If that plays out, the effect of the Covid-19 crisis on Corporate America will be about half the pain of the 27% dividend slashing during the Lehman experience.

Critically, a plank of support for the market can be found in a slow drift up in “out year” dividend expectations.

To entertain this thesis, humor me and assume this crisis is exactly as ugly as the GFC, no more, no less.

Back then, the stock market topped out in October 2007, but peak dividends came in June 2008. They bottomed 21 months later, in March 2010, retaking the old dividend levels by August 2012. Call it four years for dividends to come full circle in what was until recently the ugliest depression/recession in most of our lifetimes.

Figure 4 shows S&P 500 dividends through the years, along with the futures market’s expectations to 2030 (the dots). The washout year is 2021, as discussed above, but notice the Street does not anticipate dividends retaking the $60 level until 2030.

But if this crisis is as bad as the GFC, that would mean dividends regain all lost ground by 2024, not 2030. Critically, because the market is forward-looking, WisdomTree’s bread-and-butter dividend strategies need not wait around until the middle of the decade to catch a bid. If I am right and the total dividend pie gets back on its feet sooner rather than later, those dividend dots on the chart will begin to move higher. That could prove fortuitous for firms that populate many of WisdomTree’s strategies.

If we catch a second wave of Covid-19 or the virus becomes deadlier, the thesis may break. Also, the starting point is a dividend yield that is barely 2%, so it appears scant chance that riches beckon.

But if you can entertain a scenario in which this economic nightmare is about equal to the GFC, or dare I say it turns out to be more benign, then this is a metric that can support the market as expectations continue to rise to meet reality.