ETFs Can Shine in Times of Crisis

Will active managers shine in 2020? I doubt it.

It has been a while since we experienced extended and serious volatility in the market, especially anything close to what’s happening now.

2020 will be remembered in the record books as a year with some of the wildest and worst daily declines in history. Will this be the year that active mutual fund managers finally earn their fees?

The SPIVA Scorecard, produced by Standard & Poor’s, looks at how active mutual fund managers perform versus passive index funds, and is one of the best resources I track for this type of analysis.

The 2008 bear market was the last big calendar-year decline. Here are a few summary quotes from the 2009 Scorecard to see if volatility helped mutual funds1:

Investors tend to embrace exchange-traded funds (ETFs) during market drawdowns because they are typically an efficient exposure for putting capital back to work.

Since investors were freed from the embedded capital gains that kept them locked into legacy mutual fund positions, they have tended to move with greater speed toward ETFs.

ETFs are also not just being used for tracking the market and most indexes.

WisdomTree has a number of 4- and 5-star Funds, according to Morningstar, that are adding value over a large majority of their peers. 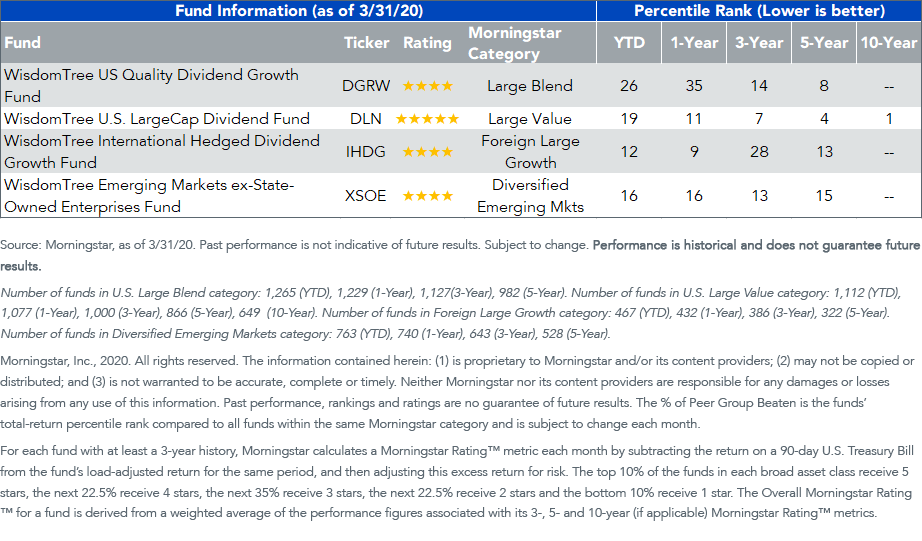 The WisdomTree U.S. LargeCap Dividend Fund (DLN) was launched in June 2006. Value as an investment style has struggled ever since WisdomTree launched in 2006. The roots of dividend-weighting fall in the underlying cash flows that companies are returning to shareholders and is most value-tilted in the U.S., where the most growth-oriented companies do not pay dividends. DLN has been a top-quartile fund in the U.S. Large Value category in 2020 and top-decile fund going back 5 and 10 years.

The WisdomTree U.S. Quality Dividend Growth Fund (DGRW) was launched in May 2013. This fund screens for growth and quality measures from the total dividend universe and takes the top 300 companies with the best rank of growth quality variables. In another year where growth, as an investment style, is dominating, this has been one of best performing dividend funds in the market. It serves the role of a core portfolio position in terms of style boxes, as this growth-oriented selection approach is selling at “value-like” prices and valuation metrics.

The WisdomTree International Hedged Quality Dividend Growth Fund (IHDG) was launched in May 2014 and follows a similar process as DGRW, but in the developed international world. Because more companies pay dividends in the developed universe, this fund has more growth characteristics than its U.S. counterpart. In 2020, this fund has been a top-decile performer in the Foreign Large Growth category. In addition to its stock investment methodology, it employs currency hedges to neutralize foreign exchange movement relative to the U.S. dollar. It has outperformed its unhedged counterpart (WisdomTree International Quality Dividend Growth Fund, or IQDG) by about 300 basis points (bps) in the first three months of 2020. I continue to advocate that currency adds expected risk but not reward, and that we believe more people should hedge their international investments.

In emerging markets, we also have the WisdomTree Emerging Markets ex-State-Owned Enterprises Fund (XSOE). We believe one of most important factors in emerging markets is state involvement in company direction through significant ownership stakes, and those businesses tend to be mostly present in the energy and banking industries. Removing state-owned enterprises from our universe results in a core emerging markets fund tilted to growth exposures. This has helped this Fund provide attractive relative returns over the 5-years plus since inception.

ETFs as a Potential Solution in Times of Crisis

While there will always be some active mutual fund managers that can earn above-average returns, WisdomTree believes now is a good time to explore how our ETFs can upgrade some of your positions.

There are risks associated with investing, including the possible loss of principal. Foreign investing involves special risks, such as risk of loss from currency fluctuation or political or economic uncertainty. Investments in emerging or offshore markets are generally less liquid and less efficient than investments in developed markets and are subject to additional risks, such as risks of adverse governmental regulation and intervention or political developments. Funds focusing their investments on certain sectors and/or regions increase their vulnerability to any single economic or regulatory development. This may result in greater share price volatility. These Funds invest in the securities included in, or representative of, their Indexes regardless of their investment merit and these Funds do not attempt to outperform their Indexes or take defensive positions in declining markets.

To the extent that a Fund invests a significant portion of its assets in the securities of companies of a single country or region, it is likely to be impacted by the events or conditions affecting that country or region. Dividends are not guaranteed and a company currently paying dividends may cease paying dividends at any time.  Derivative investments can be volatile and may be less liquid than other securities, and more sensitive to the effect of varied economic conditions. IHDG can have a high concentration in some issuers can be adversely impacted by changes affecting those issuers. Due to the investment strategy of IHDG, it may make higher capital gain distributions than other ETFs.

Please read each Funds’ prospectus for specific details regarding the Fund’s risk profile.