Welcome to the Party, Powell?

Sometimes, the best laid plans by the Federal Reserve (Fed) don’t work out as foreseen. Unfortunately for Chairman Jerome Powell, the end of 2018 and beginning of this year probably didn’t turn out as he envisioned. Remember the financial markets’ reaction to the December rate hike and accompanying Fed forecasts for additional rate increases this year? Well, this legacy has continued into the summer months and brings to mind a line from the movie Die Hard, albeit with a “Fed-twist” to it. 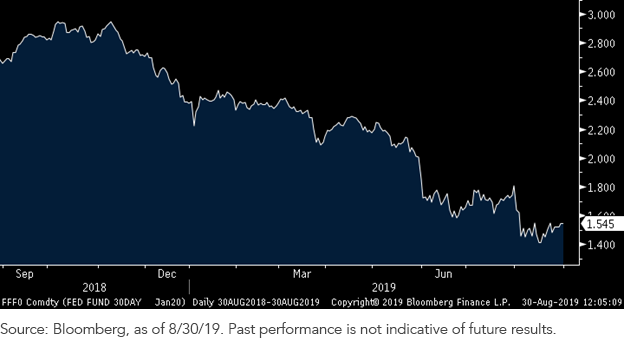 What, you may ask, is the latest rendition? In a word, tariffs. Or to explain this better, the ongoing, and up to this point, escalating trade war with China. The Fed had seemingly delivered on the much-awaited rate cut at the July FOMC meeting, and even though it was characterized as a “hawkish rate cut,” the money and bond markets seemed to take the news in stride. Then news hit that the U.S. would likely impose increased tariffs by September 1, and hence, the latest rally in Treasuries took hold, combined with a more aggressive market expectation for additional rate cuts later this year and into 2020 (see graph).

The most recent bout occurred following Powell’s August 23 speech at the Kansas City Fed’s annual Jackson Hole conference. The Fed chair reiterated the stance that policy makers would “act as appropriate to sustain the expansion,” and the market reaction was basically underwhelming. By the way, the Fed typically likes that type of a reaction, unless it is trying to send a policy message. However, another round of negative trade headlines “hit the tape” and the money and bond markets “forgot” Powell’s widely anticipated speech rather quickly.

In case you didn’t notice, the calendar has now turned to September, and that means another FOMC meeting is on tap with the results slated for announcement on September 18th. This meeting will include everything: a policy statement, a summary of economic/rate projections and a presser. Based on “Fedspeak” surrounding the aforementioned Jackson Hole conference, it appears as if the there is some division among the policy makers on what the next step will be. There seems to be a camp that leans toward another rate cut later this month, with some perhaps in the 50 basis points (bps) camp, and others that feel no further rate cuts are warranted quite yet; call this the “data wait-and-see camp.” Typically, the Fed likes to build a consensus, so it would seem the reasonable expectation at this juncture is for another 25 bps reduction. In the interim, the Fed along with the money and bond markets will be receiving some fresh econ data, starting with this week’s jobs data, upcoming retail sales and inflation numbers, to name a few things. Yippee-ki-yay.

Unless otherwise stated, data source is Bloomberg, as of August 30, 2019.