Last month, the Cabinet of Japan approved an economic package including 29.1 trillion yen ($199 billion) to combat accelerating inflation after core consumer prices (measured by CPI) in Tokyo increased by 3.5% from October last year. It was the largest year-over-year gain since 1989. 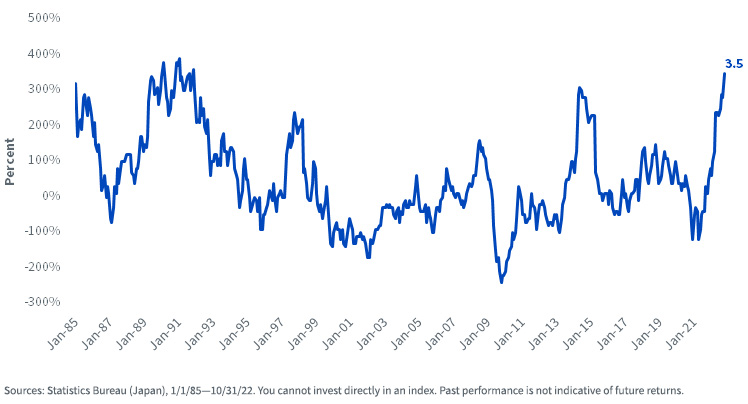 The package seeks to ease economic and geopolitical troubles in the island nation, which is the world’s fourth-largest exporter and the fifth-largest importer of foreign goods like mineral fuels, machinery and food.

Import costs have skyrocketed as the yen has fallen to historic lows versus the dollar and the yuan. The United States and China are Japan’s two largest exporters, and Japanese households are bearing the brunt of the impact.

Looking at the performance of equities around the world in the past three years, measured by the S&P 500 and various MSCI indexes in U.S. dollars, the United States was the only region to have a non-negative return. Japan fared the worst among developed markets, with a trailing three-year return of -3.23%. But, unlike the other regions, all of its negative return was driven by the depreciation of the yen.

If you measure the same return values in local currencies, Japanese equities returned 7.6% annualized over the same period. Though materially lagging U.S. equities, the local currency return was far closer than the return including the depreciation of the yen. 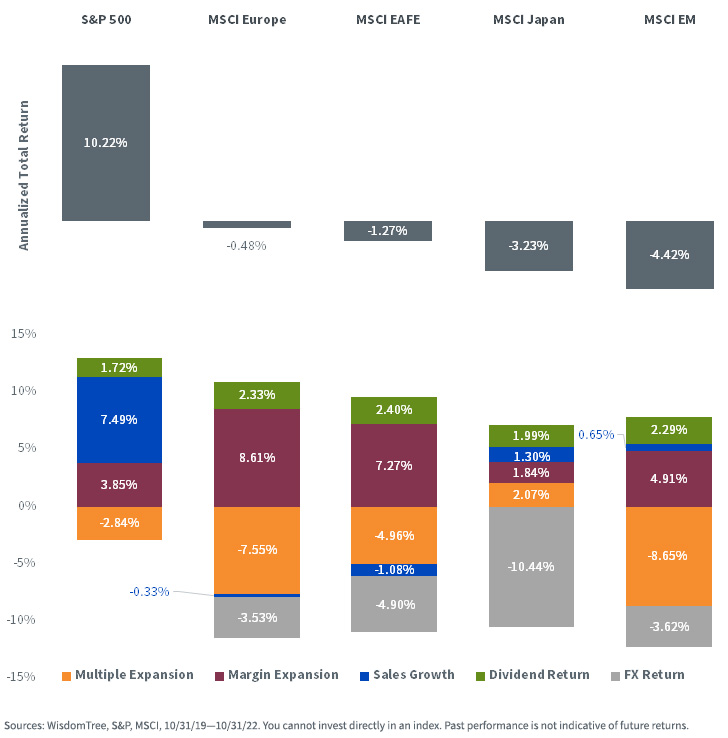 For definitions of indices and terms in the chart above, please visit the glossary.

By subsidizing household electricity and gas bills, among other efforts, the government estimates that the injection will help reduce overall inflation by over 1.2 percentage points and increase real GDP by approximately 4.6 points.

While Japanese consumers are plagued by sharp increases in costs of living and stagnating wages, Japanese multinational corporations tell a slightly different story.

Japan Inc. has increasingly been moving its production and manufacturing facilities overseas since the 1980s, looking to take advantage of cheaper labor costs and to cater more effectively to foreign demand. Today, such companies are seeing significant gains when converting overseas profits to yen, despite floundering local sales.

The WisdomTree Japan Hedged Equity Index (WTIDJH) seeks to provide exposure to Japanese equity markets while mitigating exposure to fluctuations of the yen versus the U.S. dollar. The Index consists of dividend-paying companies incorporated in Japan and traded on the Tokyo Stock Exchange, and excludes companies that derive 80% or more of their revenue from Japan. By excluding such companies, the Index has over-weight exposures to Japan’s most export-centered companies and sectors. 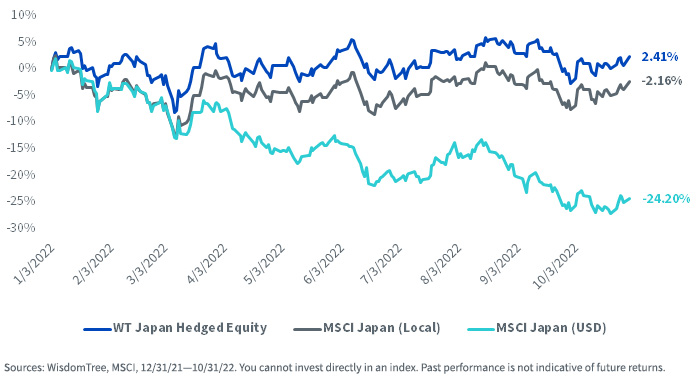 The annual rebalance of the WTIDJH saw the number of constituents increase from 474 names to 528, as well as overall improvements in profitability and trading multiples. The Index shed some of its allocations to large caps, increasing its weight to mid and small caps, and its dividend yield increased slightly from 3.72% to 3.83%.

The Index’s price-to-earnings ratio decreased from 8.51 times to 7.81 times, to almost half of that of the MSCI Japan index (which trades at around 15 times), and is at a discount to almost all developed MSCI country indexes. 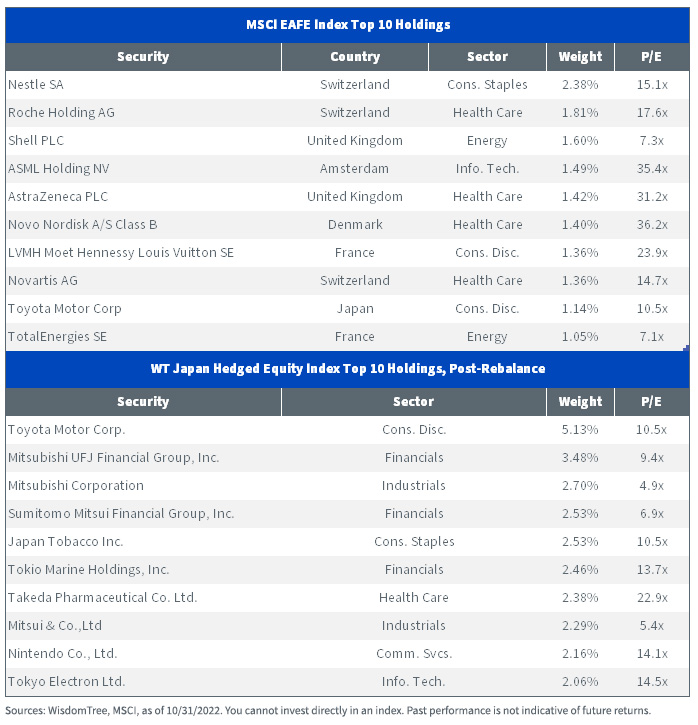 The Index’s increase in ROE from 11.7% to 13.7%—currently the highest it has been since inception—is particularly significant.

Until around a decade ago, many large Japanese companies were notorious for their low profitability, bloated balance sheets and poor management. In 2012, then-Prime Minister Shinzo Abe enacted a series of reforms, dubbed “Abenomics,” to revitalize tired Japanese equities and make them more attractive to investors. 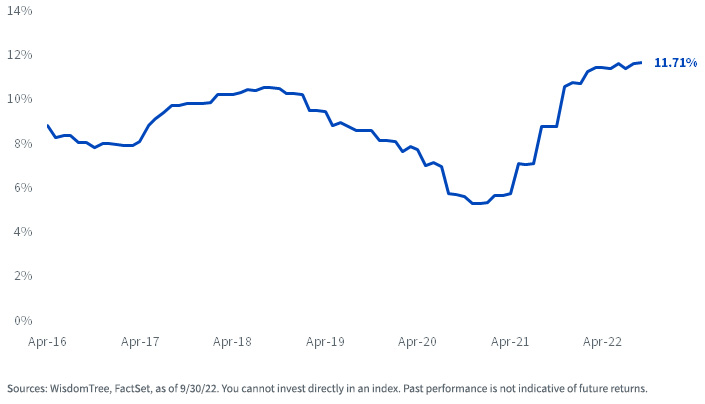 The JPX-Nikkei 400 Index was launched in 2014 as a part of these initiatives and included names based on metrics like ROE and cumulative operating profit. Nicknamed “the shame index,” the JPX-Nikkei 400 highlighted the nation’s best-run companies as well as its worst-run (along with its managers). From 2012 to 2018, ROE for Japanese stocks jumped from around 5% to 10%.

The WisdomTree Japan Hedged Equity Index’s post-rebalance ROE of 13.1% is testament to Japanese companies’ efforts to improve capital efficiency and return more cash to shareholders through dividends and buybacks.

After years of reform, Japanese companies now have much stronger balance sheets and cash reserves than they did a decade ago. In a cheap global market like today’s, those cash reserves leave plenty of room for further improvements in shareholder-friendly distributions.

As central banks around the world step in to hold the rising dollar at bay, many eyes are on the Japanese government to address the yen’s decline. The historically dovish Bank of Japan has reiterated its stance to leave interest rates unchanged. Currency-hedged investors stand to benefit from increasing profits for Japanese exporters from a weakening yen while neutralizing the impact of the weakening yen on returns.