Professor Jeremy Siegel is now a vocal critic of the Federal Reserve.

Last year, the Professor referred to Jerome Powell as the most dovish head of the central bank in history. Powell ignored signs of inflation and referred to it infamously (and incorrectly) as “transitory.”

Now that Powell has found inflation religion and believes it will remain sticky, he has swung so far to the other extreme that Siegel now refers to him as among the most hawkish central bankers in history.

We hosted a conference call to get Siegel’s latest view on the market implications of this tough talk for the Fed and you can listen to the full replay below.

First, a few charts from the sixth edition of Stocks for the Long Run, by Jeremy J. Siegel with Jeremy Schwartz, which just recently became available at bookstores and illustrates Siegel’s view on the inflation outlook.

Chapter 24 of the new edition discusses the COVID-19 pandemic and the government and monetary policy response. The explosion in M2 money supply is what signaled to Professor Siegel that inflation would become a problem. 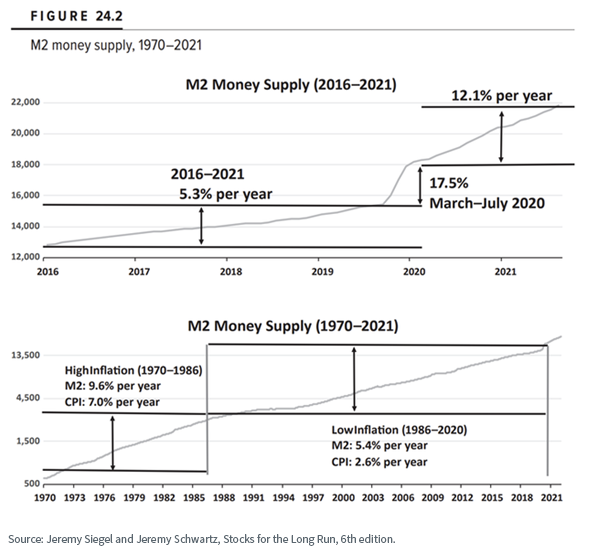 M2 historically was growing at 5% a year, which is consistent with an approximate 2%–3% real growth rate for the economy and 2%–3% inflation. We want the money supply to grow at that 5% rate over the long run, which it was from 1986 to 2020.

During the onset of the pandemic, M2 ballooned 17.5% in four months and grew at a 12.1% rate after. That above-trend growth in M2 is now money in the economy—cash in people’s checking accounts from all the relief measures and fiscal transfers. The Federal Reserve helped support this by buying bonds and expanding its balance sheet.

Unlike the quantitative easing following the financial crisis—when Fed bond-buying remained as excess reserves at the Federal Reserve and never found its way into the real economy—the pandemic response did affect the real economy.

Powell stated at recent press conferences that there was a spurious relationship between inflation and the money supply. Siegel believes Powell needs to recalibrate those models and zoom out from the noise to see the big picture.

Professor Siegel studied under the University of Chicago’s Milton Friedman, who famously taught that inflation is always and everywhere a monetary phenomenon. Going back 150 years, spikes in inflation were generally preceded by spikes in the money supply, and 2020 saw a record spike in M2. 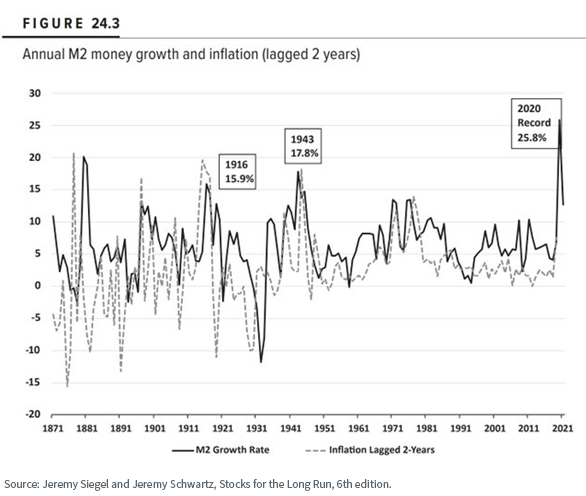 What does this M2 data show now?

The five-month change in money supply is now negative, something that rarely happens. Even during the famous Volcker years, the fight against inflation did not send the money supply and liquidity for the economy back and forth into contracting and restrictive territory.

Powell risks slamming on the brakes on the economy far too quickly, sending us crashing through the windshield. 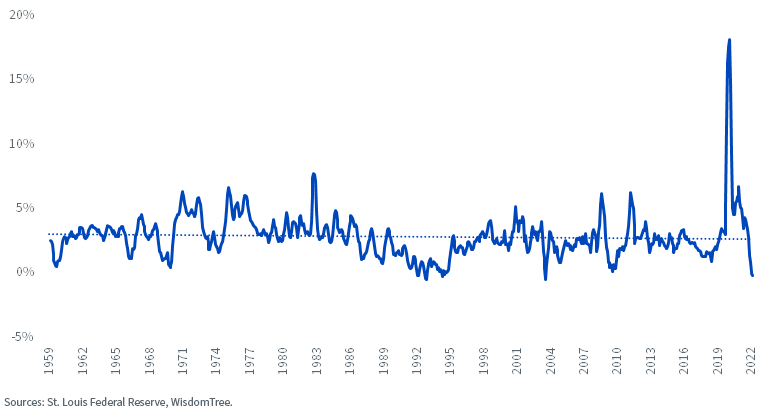 This money supply issue was just one of the key topics discussed in our recent conversation with Professor Siegel on the current state of the economy and the Federal Reserve. To get the Professor’s latest take on the Fed, inflation, and stock and bond returns, you can listen to the full replay here.