Taming the Inflation Shrew Gets Harder for the Fed

This week’s inflation report confirmed one thing: U.S. inflation is now pervasive. U.S. core inflation for August was far higher than expected at 6.3% YoY, exceeding the prior quarter. Surprisingly, despite the lower input from energy prices, the rise in core inflation appears more entrenched around a 5%–6% annualized rate and broad-based—from food to shelter costs.

The stickier inflation implies that the Federal Reserve (Fed) needs to move above the neutral rate quickly. Markets are now convinced that Fed officials will raise rates, possibly above +4%, via sequential rate hikes on September 21 and then in November and December, provoking unavoidable economic pain. Such a shift signifies a steep change from Fed forecasts in June, reflecting a tougher fight against inflation after August core consumer price growth came in higher than expected. Rising inflation-adjusted yields are placing pressure on growth-oriented tech stocks, as their long-term earnings prospects now have to be discounted at higher rates. 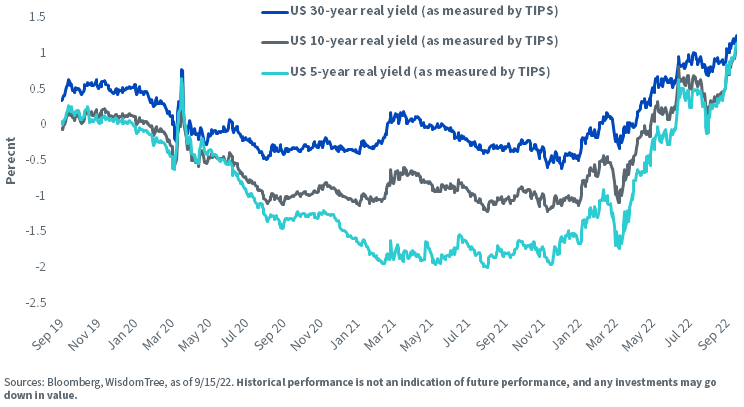 In comparison, the August Production Price Index (PPI) was more encouraging, reminding us that the CPI numbers are not the sole inflation data worth watching and signaling that some moderation may be underway. The headline numbers were not too alarming, with August PPI +8.7% YoY versus the forecast of +8.8%. The MoM print was -0.1% versus an estimated +0.1%, with “Energy” down -6% MoM, reducing the final figure. Also, the “Manufacturing Materials” component fell significantly, to -1.7% in August, marking the widest monthly drop since April 2020.

Core PPI rose 0.4%, a tenth more than expected, but half the increase was due to a 0.8% gain in the erratic trade services component, which measures margins at wholesalers and retailers. Barring trade services, the core PPI rose only 0.2%, following a mere 0.1% increase in July.

Since Jackson Hole’s “central bankers” summit, several Federal Reserve members reiterated their hawkish stance, anticipating rising risks into H2 2022 and fueling a gloomier economic backdrop. Among them, Jerome Powell, Lael Brainard and John Williams all confirmed a significant amplitude and pace of rate hikes necessary to cool down inflation, which is currently far too high.

U.S. Inflation Remains in the Early Innings of Moderation

Besides the August CPI data, over the last couple of weeks, a few indicators showed that the pace of price increases in the U.S. is starting to slow. Among them, gasoline futures, which returned to early January levels, down almost -50% from their June peak, and used car prices, one of the fastest-rising components of CPI in 2020 and 2021, which fell by -9% over the past six months. Even the latest Fed Beige Book assessed that price increases were moderating in 9 of the 12 measured districts, thanks to lower fuel prices and weakening aggregate demand, which eased the pressure, particularly on freight rates.

Amidst the current macro environment, it’s hard to contemplate that the Fed might hint at a pause. The only plausible explanation for why investors believe the Fed might pivot is that many investors expect the U.S. economy to plunge into a deep recession and the Fed to respond by panicking and abandoning its inflation target. Both issues may happen eventually, but neither is remotely plausible within the next six months as the U.S. remains in the early innings of the softening in core prices.

The rapid rise in U.S. borrowing costs is slowing activity in the U.S. housing market, side-lining potential buyers, crimping sales and slowing price growth. Sales of new U.S. homes fell in July to the slowest pace since early 2016 as high borrowing costs and elevated prices weakened demand. At the current sales pace, it would take 10.9 months to exhaust the supply of new homes in the U.S., marking the highest level since 2009. The likelihood of a recession in fall and winter is high and implicitly confirmed by the inverted Treasury yield curve—the U.S. 2-Year t-note yield is almost +4.0%, the highest since October 2007.

In the second quarter of 2022, equities ran ahead of themselves in the rally from their June lows into their mid-August highs, recovering just more than half of their previous decline. The performance was supported by hopes of a Federal Reserve pivot, good earnings reporting season in the U.S. in Q2 and loosening of financial conditions. Since then, financial conditions have tightened, and the Fed appears steadfast in taming inflation via rate hikes. This is causing a rotation back to defensive value-oriented sectors and out of cyclical growth-oriented stocks. Amongst the major markets, the U.S. is most sensitive to higher real yields. Growth-oriented stocks are especially sensitive to moves in real yields, owing to their higher duration. In comparison, value tends to have a lower sensitivity to real yields. This explains the rotation back to value stocks in August following two consecutive months of declines.

Rotation from Growth into Value Stock

For the most recent month-end and standardized performance and to download the fund prospectus, click the respective ticker: DHS, PFM, ONEY.

For definitions of the terms in the table above, please visit the glossary.

There are risks associated with investing, including possible loss of principal. Funds focusing their investments on certain sectors increase their vulnerability to any single economic or regulatory development. This may result in greater share price volatility. Dividends are not guaranteed, and a company currently paying dividends may cease paying dividends at any time. Please read the Fund’s prospectus for specific details regarding the Fund’s risk profile.

All funds are managed differently and do not react the same to economic or market events. The investment objectives, strategies, policies or restrictions of other funds may differ and more information can be found in their respective prospectuses. Therefore, we generally do not believe it is possible to make direct fund to fund comparisons in an effort to highlight the benefits of a fund versus another similarly managed fund. These funds were chosen for comparison due to their similar investment objectives.