In the grand scheme of geopolitics, only the Federal Reserve truly has an independent monetary policy.

But among other central banks, China’s has a relatively high degree of freedom. As is standard among Chinese institutions, the People’s Bank of China (PBoC) is a ministry of the government. Unlike the Fed, its monetary policy is always secondary in driving China’s economy.

Currently, the U.S. and China are on opposite sides of the monetary cycle, with the Fed tightening and the PBoC easing. 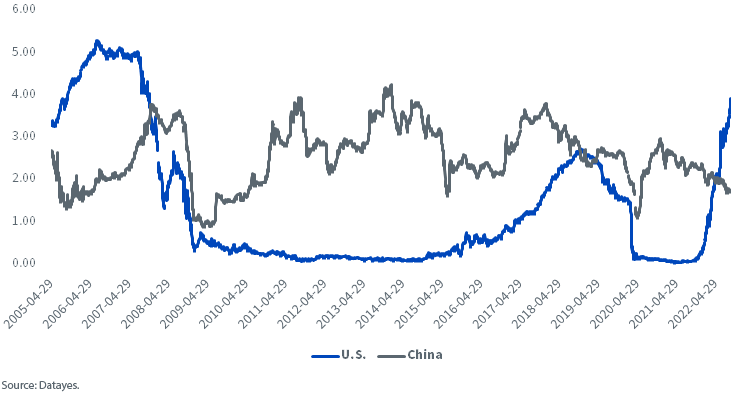 Below is a framework for understanding how the PBoC functions and its current easing cycle.

Among China’s government ministries, the PBoC is quite professional. Like China’s economy, the PBoC’s monetary policy principle has evolved to be part market-driven, part discretionary-policy-driven. It also tells the public how it makes monetary policy through a quarterly report. There is a seven-day inter-bank collateralized repo rate (DR700) that’s all market-based and a medium-term lending facility (MLF) rate that’s policy-based.

From the market rate (DR007) and policy rate (MLF), it surveyed 18 banks’ rates for prime loans, formulating a loan prime rate. Most of these banks are state-owned, so the PBoC could offer guidance, though it tried to allow the market rate to dominate as much as possible. Based on the loan prime rate, the final mortgage and loan rates are decided by banks. 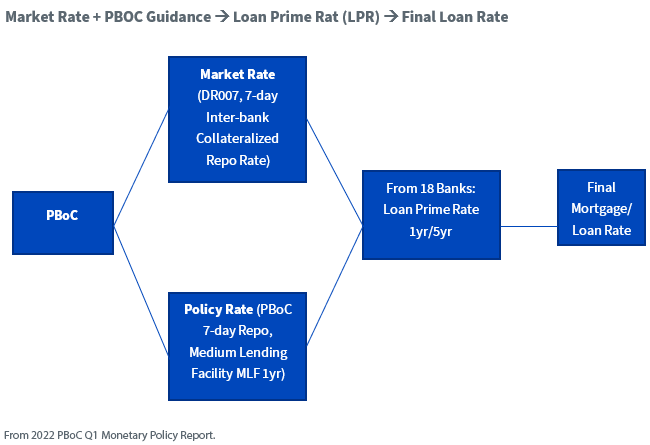 The PBoC has been reducing rates over the last year, as China’s economy slowed significantly since 2021 Q4 due to a real estate contraction and Covid Zero’s impact on consumption.

But the PBOC reduced rates in a very incremental fashion, 5 or 10 basis points (bps) at a time, because China’s total leverage in the economy was already similar to the U.S. after doing a big bang stimulus during 2008/2009. 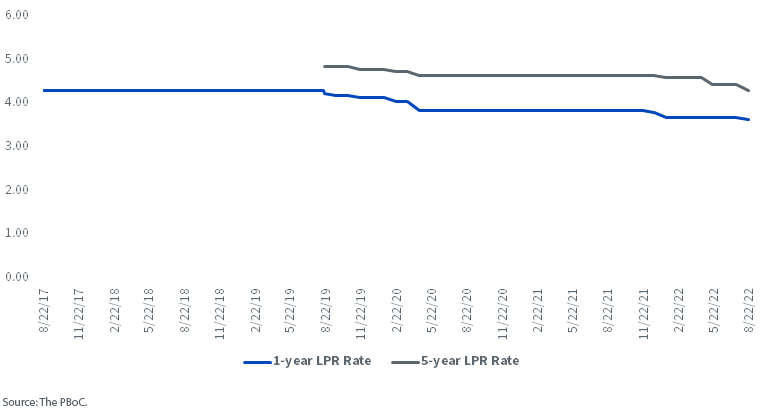 3. Will the PBoC reduce rates again this year, and will the Chinese currency RMB crash?

There is a high chance it will make one very incremental rate reduction—but no one should expect it to get in the front seat and drive the economy like the Fed. Usually, the PBoC needs to see at least two things to act: the market rate (DR700) significantly moving away from the policy rate (seven-day repo rate) and the economy being so bad that sentiment may significantly shift if the PBoC doesn’t do something.

Currently, the seven-day market rate is again lower than the policy rates by about 50 bps. If the economic data being released falls significantly below expectations, there is a chance the PBoC will act.

Recently, China’s Policy Rate Has Been Higher Than Its Market Rate 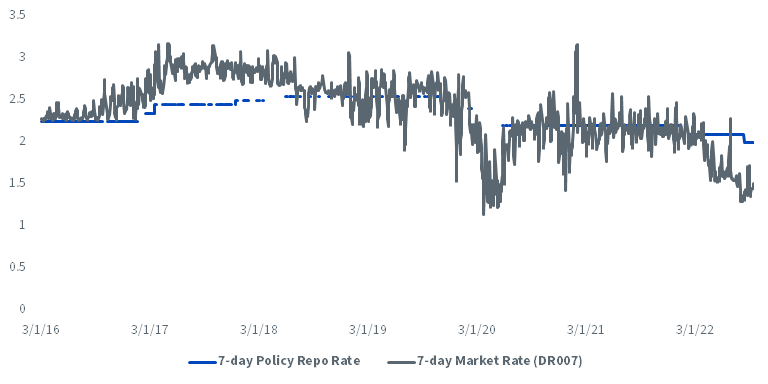 The PBoC’s other task is to manage the currency (RMB) volatility. The PBoC has ample tools to manage currency. However, with the Fed raising rates, China’s currency will likely continue losing value against the U.S. dollar. But it is unlikely to see a crash, as China’s exports are still robust, and the trade-weighted yuan has not changed much recently. We plan to dig deeper into this issue in future blog posts.