Thoughts on the Japanese Yen at 145

On July 21, 2022, the European Central Bank hiked rates by 0.50% to 0.00%, effectively ending its experiment with a negative interest rate policy. This made the Bank of Japan one of only two central banks in the world with a negative deposit rate. Since that time, the Japanese yen has come under pressure versus the U.S. dollar, with the exchange rate rising to 145, a level not seen since the late 1990s.

While a weaker yen helps Japanese exports, investors with exposure to unhedged Japanese equities have experienced losses of more than 20% year-to-date. By contrast, the WisdomTree Japan Hedged Equity Fund (DXJ) is up 6%. With currency risk playing such an important role in international investing, we decided to take a closer look at the drivers of return in Japanese markets. 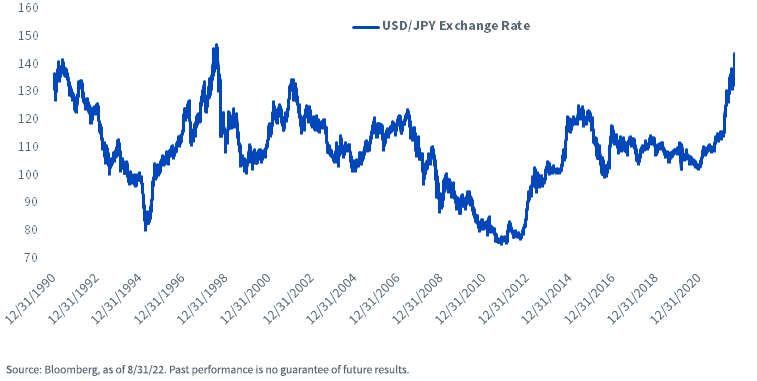 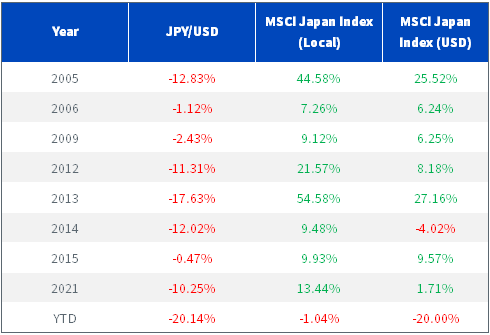 Over the last few decades, the yen has been negatively correlated to the equity market. Put another way, when the yen is falling, stocks are rising (and vice versa). This is the classic example of why we believe that currency hedging in Japan makes sense. In years like 2014, an investor could get the market call correct (equities higher) but still lose money on account of the losses from the exchange rate. In nine out of the last 24 years (the most common outcome in our study), yen weakness has ultimately led to higher returns in Japanese equities. 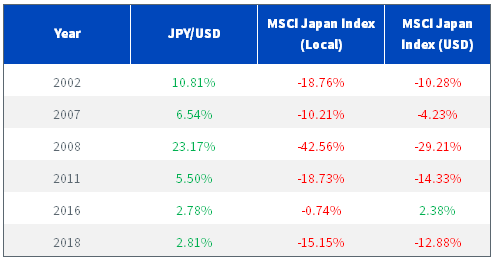 During periods of heightened risk aversion, Japanese equities can fall, and the yen appreciates versus the U.S. dollar. These years are often described as the unwinding of the yen’s “carry trade.” Since interest rates in Japan tend to be lower than in other markets around the world, the yen can be a preferred funding currency. Borrow yen and buy risky assets. When risky assets start to underperform, the yen tends to appreciate as the trade gets reversed. 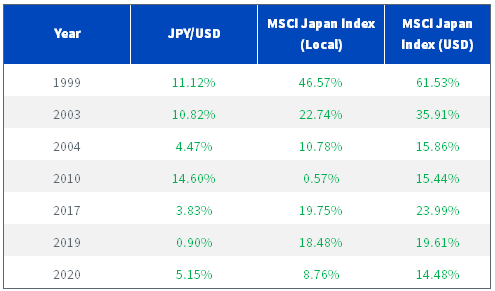 While the first two scenarios showed a negative correlation between the yen and Japanese equities, there have been periods when the two moved in lockstep. In this Goldilocks period of returns, U.S. investors benefit from a stronger yen and higher equity prices. However, while it has occurred seven times over our sample period, the primary driver of double-digit returns in those years was overwhelmingly equities.

Thankfully, the rarest outcome, scenarios where the yen depreciates along with a decline in Japanese equities, is a worst-case scenario for U.S. investors. It occurred only two times in the last 20+ years, back-to-back years in the early 2000s.

Based on our research, we believe that currency hedging Japanese stocks can lead to the highest probability of good outcomes for U.S.-based investors. For those who think the yen will continue to weaken relative to the dollar or have no view on the direction of the currency, we believe DXJ can help manage risk in international allocations.

See the Fund's page for full performance, risks and other important information.

As we show above, in years when the yen depreciates dramatically versus the U.S. dollar, an export-tilted strategy like DXJ can add significant value versus unhedged strategies.

There are risks associated with investing, including the possible loss of principal. Foreign investing involves special risks, such as the risk of loss from currency fluctuation or political or economic uncertainty. The Fund focuses its investments in Japan, thereby increasing the impact of events and developments in Japan that can adversely affect performance. Investments in currency involve additional special risks, such as credit risk and interest rate fluctuations. Derivative investments can be volatile, and these investments may be less liquid than other securities and more sensitive to the effect of varied economic conditions. As this Fund can have a high concentration in some issuers, the Fund can be adversely impacted by changes affecting those issuers. Due to the investment strategy of this Fund, it may make higher capital gain distributions than other ETFs. Dividends are not guaranteed, and a company currently paying dividends may cease paying dividends at any time. Please read the Fund’s prospectus for specific details regarding the Fund’s risk profile.

Bradley Krom
Head of U.S. Research
Follow Bradley Krom @BradleyKrom
Bradley Krom joined WisdomTree as a member of the research team in December 2010. He is involved in creating and communicating WisdomTree’s thoughts on global markets, as well as analyzing existing and new fund strategies. Prior to joining WisdomTree, Bradley served as a senior trader on a proprietary trading desk at TransMarket Group. Bradley is a graduate of the Wharton School, University of Pennsylvania.