Aiming for High Income with a Quality Screen

With U.S. interest rates rising this year, and in some cases from near-zero levels, investors have been faced with a fixed income landscape that hasn’t been witnessed in several years. I wrote about this in a blog post a little more than a month ago and wanted to update the story.

This post is going to highlight specific developments within the U.S. high-yield (HY) arena this year. Heading into 2022, a definitive argument could have been made that HY fixed income was on the expensive side, with spread levels finishing last year at a narrow +300 basis points (bps). Since then, HY differentials have been on the rise, and at one point in early July, came in just under +600 bps, or almost doubling in a little more than a six-month span. 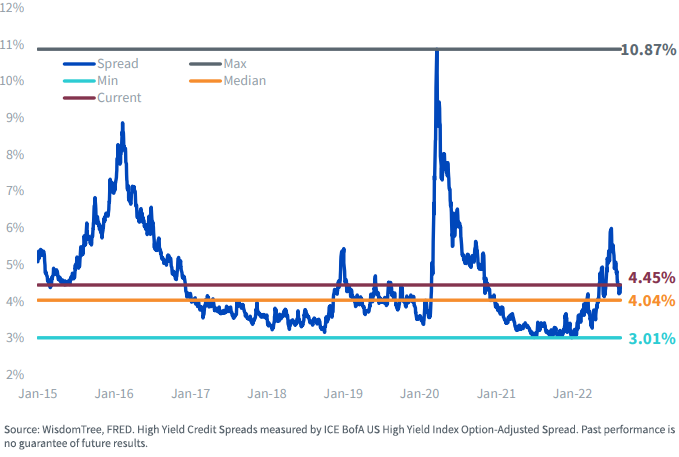 Since then, the HY market has gone from being one of the worst performers in the U.S. fixed income space to one of the better ones. To provide perspective, HY was posting a year-to-date return of -14% in early July, but that has since improved by almost half to -7.7%, as of this writing. Compare that to the benchmark Agg, where year-to-date performance during this same period has remained in the roughly -9% to -10% range.

Back to the ‘income’ part of the equation. HY’s yield to worst (YTW) is now roughly 7.60%, up nearly +340 bps year-to-date. As recently as July of last year, the YTW was only about 3.50%. Interestingly, the U.S. high-yield market has rallied in the wake of softer data that suggested the economy is in a ‘technical recession.’ This yield level places HY in its more well-known traditional role of an ‘income provider’ in bond portfolios, and could help explain this recent rally, as well as being a sign that unless there is a deep downturn, the HY market has already discounted Fed-induced economic softness. It should be noted that even with this recent outperformance, HY spreads are still moderately above the median level of +404 bps over the last 7.5 year period.

With concerns about recession, and potential risk-off, remaining a prevalent part of the investment landscape discussion, a HY solution that recognizes this factor is an important consideration for investors. The WisdomTree U.S. High Yield Corporate Bond Fund (WFHY) employs a ‘screen for quality’ approach which focuses on only public issuers and their attendant balance sheets. We found that eliminating the public issuer universe with negative cash flow can serve as an important quality screen and helps to address the elevated credit risk apparent in the market cap-weighted approach, with the goal being to mitigate credit concerns, i.e., default risk, that can arise from risk-off periods (recessions). As the above graph highlights, the U.S. HY market cap default rate has been 13.2%, while for WFHY it has been only 2% since inception.

The bottom-line message is that “there’s income back in fixed income”, but the current market environment has made it clear that a strategy that emphasizes fundamentally sound companies with strong cash flows is prudent in a time of economic uncertainty.

There are risks associated with investing, including the possible loss of principal. Fixed income investments are subject to interest rate risk; their value will normally decline as interest rates rise. High-yield or “junk” bonds have lower credit ratings and involve a greater risk to principal. Fixed income investments are also subject to credit risk, the risk that the issuer of a bond will fail to pay interest and principal in a timely manner or that negative perceptions of the issuer’s ability to make such payments will cause the price of that bond to decline. While the Fund attempts to limit credit and counterparty exposure, the value of an investment in the Fund may change quickly and without warning in response to issuer or counterparty defaults and changes in the credit ratings of the Fund’s portfolio investments. Please read the Fund’s prospectus for specific details regarding the Fund’s risk profile.