In the present macroeconomic environment, there are many areas of employment where we might wonder whether it could make sense to have humans less involved. Human beings, for instance, might demand higher wages, which could lead to high prices for certain products and services, leading to further inflation and demands for even higher wages. Economists term this the “wage price spiral,” and fighting it is a primary mission of central bankers.

However, if we can take people away from certain tasks, then there would be no more need for wages. As long as the system is maintained and monitored properly, a whole component of cost would melt away.

How close are we to being able to achieve this?

The Case Study of Autonomous Trucks

If we look at the business of trucking across the geographically dispersed U.S., there is already a chronic shortage of drivers. The American Trucking Association notes there is an historic shortage of 80,000 drivers.1 However, it’s important to acknowledge that not all kinds of truck driving are equal. There are2:

We have to ensure we frame the topic accurately and recognize that autonomous delivery on small side streets in busy cities is quite a different problem to solve than trucks driving themselves long distances in highway conditions.

In fact, assuming good weather, which is generally the case in the Southwestern U.S., an autonomous truck will see further than a human driver could. The system could also maintain the same level of attentiveness, never growing tired or drowsy. It could also operate 24 hours a day, 7 days per week, with the exception of fueling and maintenance time.

Labor costs typically represent 15% to 20% of the cost of operating a truck. Additionally, the law states that human drivers need to rest, meaning the truck can be used only about 30%–40% of the time.3

If trucks could be run 24 hours per day, 7 days a week, it could increase asset utilization by a factor of two or more.

To put the market in context, the trucking market in the U.S. is around $700 billion in size, while globally it is roughly $4 trillion.4 Even a small gain from autonomous driving in a market this size could equate to very big values.

Global Companies Are Testing on Public Roads in the U.S.

Einride AB is a Swedish firm with a unique looking autonomous truck. It has been typical for autonomous trucks to look at least somewhat like what we are used to, complete with the usual human doors and windows. Einride’s ‘Pods’ are stubby, snub-nosed vehicles, with no driver’s cab. 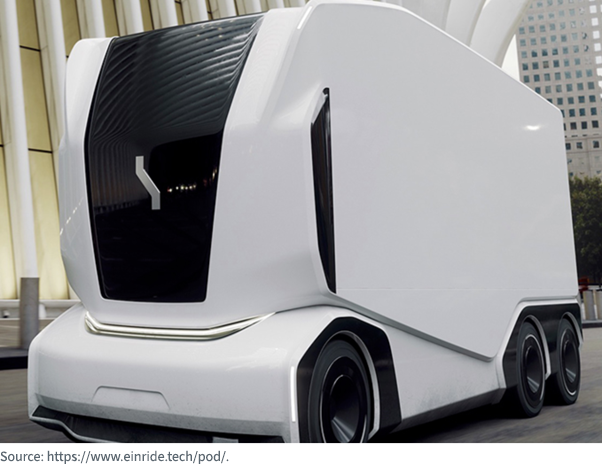 Testing will be done in an operation with GE Appliances on a road between two warehouses in Tennessee.

The Pods have room for about 10 pallets of freight, a capacity of roughly 57,000 pounds. Without onboard drivers, they are managed remotely, and operators can manage more than one vehicle at a time. Einride signed an agreement in 2021 to deliver 300 electric trucks to shipping giant A.P. Moller-Maersk A/S.5

Aurora  is outlining a market entry sequence for bringing various types of autonomous activity into the market. Trucking is the first segment in the sequence, for the rationale that we mentioned above. For it, Aurora has partnered with PACCAR and Volvo.

The next step in the sequence regards passenger mobility. Aurora indicates that the rollout benefits from the advances that they will make with the truck technologies. They have partnered with Uber and Toyota for this segment.

TuSimple  is running a global operation that has made a lot of progress so far7:

While the players take different approaches and tend to focus in different markets, it’s clear that significant progress has been made in autonomous trucking.

Even with the significant progress that we can see, it is not clear exactly when we will see massive amounts of human jobs being replaced with autonomously driven trucks. It is unlikely that in the current cycle of fighting inflation across the supply chain will be materially impacted by developments in this space. Still, the market is so large that we believe investors do have to remain attentive. It’s also clear that autonomous trucking could have the best chance of being utilized at scale.