Is a Recession Being Priced In for U.S. Small Caps?

With the S&P 500 flirting with bear market territory, headlines are proclaiming a recession is priced in.

But at what probability?

High-yield credit spreads—commonly viewed as a leading indicator of economic slowdowns—have spiked higher by 112 basis points since the start of the year. 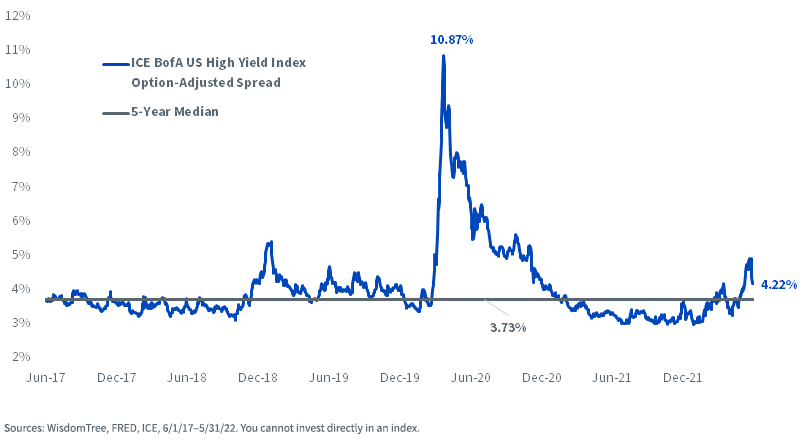 If we look to valuations on the S&P 500, the picture looks more benign, even after a decline of 14% from its high. Undoubtedly recession risk has picked up, but it seems to us far from a foregone conclusion.

The current forward price-to-earnings (P/E) ratio on the S&P 500 (17.9 times) sits above its 20-year historical median of 16 times. Assuming a recession began with the negative GDP growth in the first quarter and equities have eclipsed peak earnings for the cycle, one might expect a meaningfully lower multiple on the index.

For context, amid the recession induced by the global financial crisis, the average of the S&P 500 P/E ratio was a far lower 13 times.1

Going down the size spectrum in U.S. equities, valuations are signaling a far more dire outlook.

What seems clear to us is investors expect the challenge of the Federal Reserve successfully navigating a “soft landing” for the U.S. economy to weigh more heavily on small-cap earnings than large-cap earnings. As a result, valuations for small caps, relative to large caps, are more fully discounting a recessionary headwind.

For investors who a) are searching for attractive valuation opportunities and have a sufficiently long time horizon to withstand normal business cycle gyrations, or b) who assume a potential economic slowdown will be more mild than valuations imply, we would suggest an over-weight allocation to small caps.

While most investors are familiar with how select tech giants provided an earnings cushion for large-cap U.S. equities, fewer appreciate the sheer magnitude of the rebound in small-cap earnings.

Strong earnings growth has pushed down the multiples of both indexes. The S&P 500 multiple of 17.9 times is about 10% above its 20-year median P/E multiple but well below its 20-year peak of 23 times from July 2020.

The last time small-cap earnings multiples were this depressed was at the bottom of the global financial crisis in early 2009.

The valuation discount for small caps later in an economic cycle is not necessarily unexpected or unwarranted.

Small caps tend to have less diverse businesses than large caps and are more skewed toward economically sensitive sectors like Financials, Materials, Industrials and Consumer cyclicals that tend to have more volatile earnings growth.

Nonetheless, the dire outlook for small-cap earnings implied by valuations may be setting a low bar for small caps to beat—and for investors to prosper from.

Valuations are much less extreme than they were and, in some cases, reflect embedded expectations that are quite bleak. It may be less gut-wrenching to invest when the consensus outlook is for sunshine. But the best returns can occur when a less cheerful scenario is reflected in security prices.2

Trends in sector-level earnings growth will be the topic of the next post in a three-part series on small-cap valuations.