It’s the moment Japanese equity longs have been waiting for: Friday’s re-test of nearly 2-year-old resistance in the ¥113 area on JPYUSD (the Japanese yen to U.S. dollar exchange rate). In less than a year, JPY has weakened from ¥103.92 to ¥113.30. 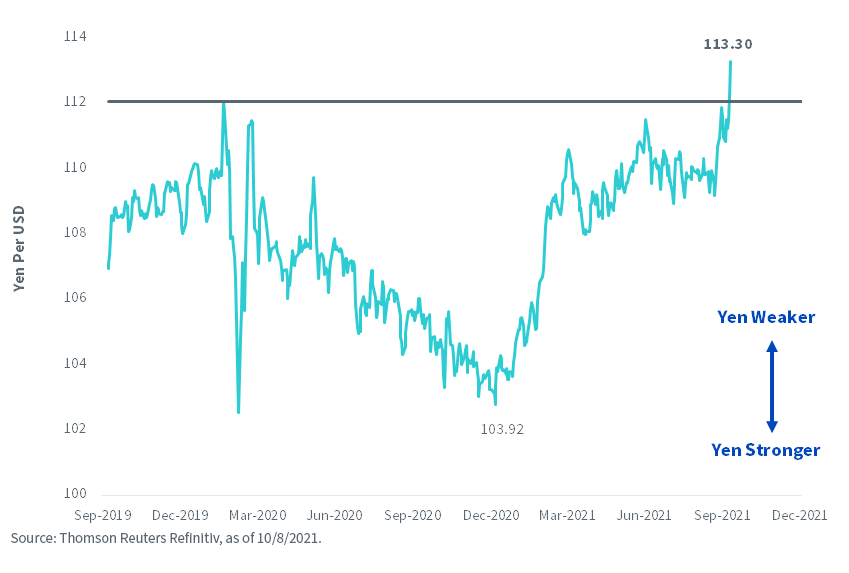 Unlike many strategists, I do not view a lack of inflation as a bad thing for society; you could do a lot worse than living in a place like disinflationary Switzerland. In contrast, Americans are right now reeling from the spiking cost of everything from gasoline to bacon. In Japan, a different situation: year-over-year headline consumer price inflation is still negative.

That may soon change, now that energy prices are sky-high and the recent currency weakness starts to show up in import prices. Nevertheless, the degree with which Japan’s inflation rises will likely be much less harrowing than the situation that is already confronting the U.S.

Before the yen’s Friday move beyond ¥112, Haruhiko Kuroda, the head of the Bank of Japan, stated that he expected consumer price inflation to go “slightly positive” in coming months. Considering everything that is happening in natural gas, base metals, houses and so many other items of interest, I will gladly take “slightly positive” for the inflation scene in the country that houses the world’s second-largest stock market.

Japan also has some headlines making the rounds that could get investment juices flowing. One of them is a move on Toshiba1 that is being orchestrated by Elliott Management and other activists. At ¥4,900 per share, the lumbering conglomerate trades no higher than it did twenty years ago. Before Elliott decided to stir the pot, several other major shareholders had already worked together to oust the chairman of the board.

Toshiba is just one case, notable because the company is a household name, but this type of thing is no longer happening in isolation. I recently wrote about some of the new governance initiatives that will help Japan become more shareholder-friendly.

Picture the business challenge that confronts Elliott or someone like Carl Icahn, the billionaire corporate raider. Whereas a quarter century ago, activists could take their pick of about 8,000 U.S. corporations, today the list has been cut in half, to 4,266 (Exhibit X). 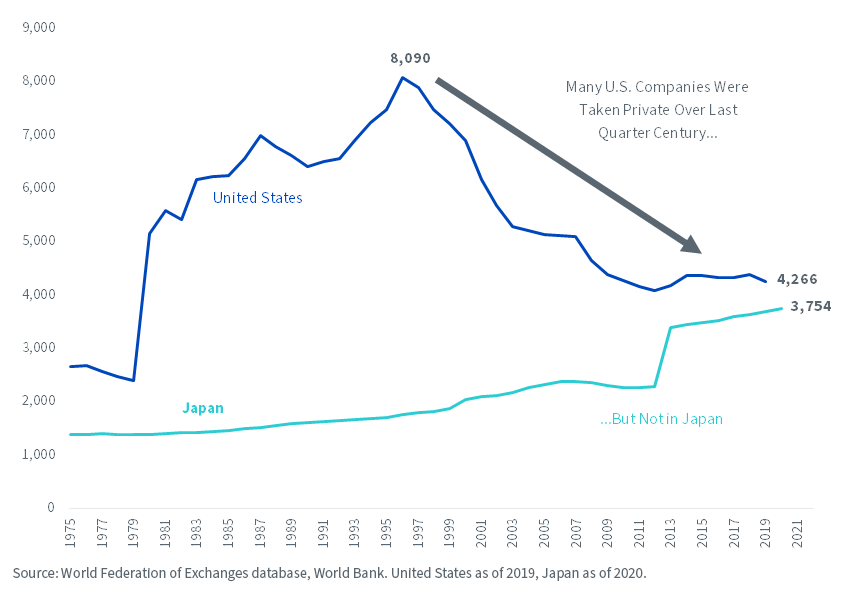 What happened to all those corporations? They got taken private or were gobbled up by competitors. If whales want to find turnarounds, much of the NYSE and the NASDAQ have been picked through.

Meantime, Japan has 3,754 listed companies. Many have inefficient cash stockpiles, cross shareholdings, entrenched management, you name it. I won’t be surprised if I see people like Dan Loeb of Third Point Partners or other key “event-driven” investors such as ValueAct or Starboard Valueon the front page of the Journal in 2022, making a move on the “next” Toshiba.

A couple things to keep in mind.

Firstly, Japan’s new Prime Minister, Fumio Kishida, has been in office for about 2 minutes. No one knows for sure if he will be keen to lay out a red carpet for a bunch of New Yorkers who are ruffling feathers and embarrassing famous CEOs. Secondly, Kishida has stated that he may increase capital gains and dividend taxes, creating a headwind for equities. Keep an eye on him in these first few weeks of his administration.

Meantime, inside the last three weeks, the economic picture has deteriorated the world over. I cannot get away from China witnessing outright manufacturing contraction in September – its PMI was 49.6 – and I also spent a chunk of last week wondering if India is going to run out of its coal inventory.

Yet Japan’s September flash manufacturing Purchasing Managers' Index (PMI) estimate from Jibun Bank was 51.2. When you have liquefied natural gas (LNG) going up hundreds of percentage points in the matter of a few weeks, you will gladly accept an ever-so-slight expansion in Japan’s manufacturing core amid that headwind.

Finally, should Japan’s economy roll over, I do not think that is something that would happen in a vacuum, presenting some risk that is specific to only Japanese stocks. Think about it: we have known now for a week that the Atlanta Fed’s “GDPNow” estimate puts the U.S. growth trajectory at just 1.3% annually, down from around 4% a few weeks ago.

Inflation all around, economic activity stagnating. There is a name for that.

Regardless, unlike in the U.S., which has been witnessing annual Consumer Price Index (CPI growth north of 5% since the summer, Japan is only now going to break above the zero bound. That leaves room for the yen to keep weakening before an inflation bugbear becomes a political issue. That newfound currency competitiveness will be welcomed in Japan’s corporate boardrooms, whose seats will be increasingly occupied by people appointed by shareholder activists.

We have three funds for the country:

If you anticipate the yen will keep weakening, investigate the first two (DXJ and DXJS). If you think it will strengthen, look at the other one (DFJ).

Important Risks Related to This Article