Japan: Opening Up the Playbook

Investors who withstood last spring’s volatility have a good problem to solve for.

With valuations on the S&P 500 the highest they have been since the early 2000s, investors may want to consider “opening up the playbook”—reducing a home country bias toward large-cap U.S. equities in favor of allocations toward more moderately valued international equities.

Arguably no market has been more unloved by international investors in recent years than Japan. There are a few theories as to why:

Most recently, a surge in coronavirus cases has added to near-term economic uncertainty. Several of Japan’s largest cities recently enacted a lockdown for the next several weeks—coinciding with the Golden Week holidays—to curb the virus. Unsurprisingly, the lockdowns have dented Japanese equity returns over the past week. 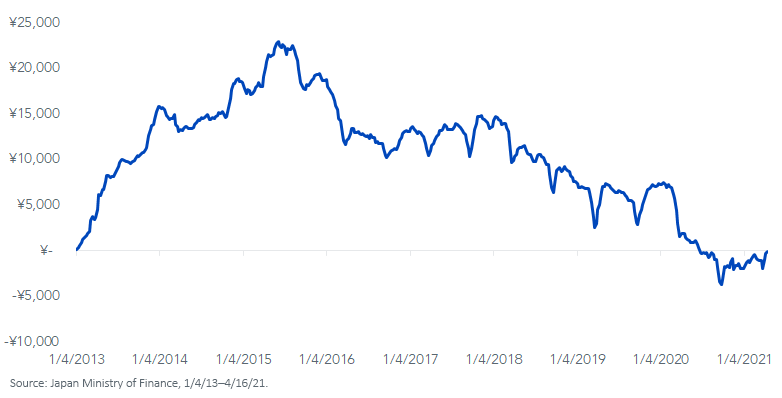 In part as a byproduct of low international investor interest, Japanese equities are significantly discounted relative to the U.S., and have a much lower valuation relative to its own history than most other major markets.

These valuations are what attracted Warren Buffett to initiate a 5% stake in five Japanese trading houses in August of last year.

To compare current valuations relative to history, the below chart shows the current price to earnings (P/E) ratio (blue bars) of each MSCI regional index alongside the S&P 500 with a percent rank comparison to how each market is priced relative to its own history (orange dots).

While Japan’s position as a market more tilted to cyclical sectors was a headwind during a global rally in growth stocks, it may be perfectly primed for an environment in which economic growth is expected to make a significant recovery in the coming years.

For example, WisdomTree’s Japan Hedged Equity Index—which tilts more toward cyclical sectors than the broad MSCI Japan Index and neutralizes yen fluctuations—has outperformed the S&P 500 by nearly 300 basis points since the end of August. The recently enacted lockdowns have been a headwind to year-to-date returns. 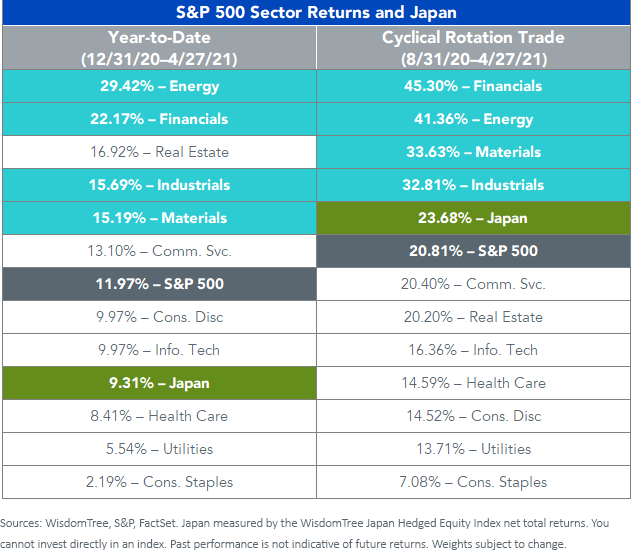 The S&P 500 only has about a 34% weight in the cyclical sectors most likely to benefit from an accelerating economy. The WisdomTree Japan Hedged Equity Index has almost twice as much weight and nearly 10% more than the MSCI Japan Index. The S&P 500 is up more than 11% to start the year despite concerns over rising interest rates. Nonetheless, the potential for higher rates becoming a headwind to both fixed income and equity returns remains a top concern among asset allocators.

Given the cyclical tilts of the Japanese equity market, as well as the tendency for the yen to weaken alongside a rise in U.S. rates, the WisdomTree Japan Hedged Equity Index has had a positive correlation between its outperformance and rising Treasury yields. 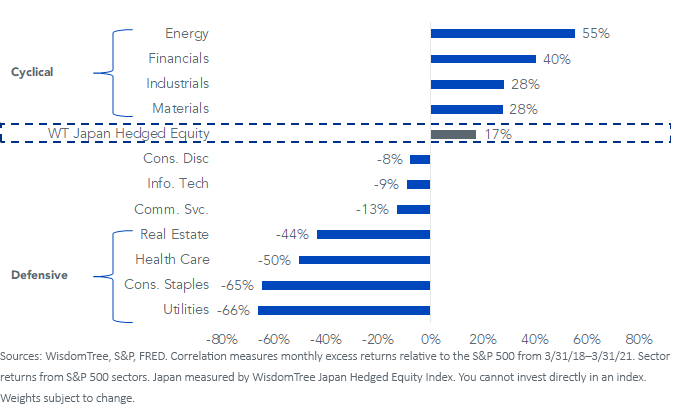 The steady and reliable earnings growth from U.S. mega caps powered U.S. indexes higher over the past several years. With U.S. valuations now near two-decade highs and the potential for a synchronized global recovery on the horizon, investors may want to consider Buffett’s “Buy Japan” playbook.