Is anyone not gunning for Big Tech?

Congressional Democrats certainly are. The House Judiciary Subcommittee’s recent 450-page anti-trust report was a wake-up call to the Silicon Valley giants: the prospect of break-up is no longer remote.

The document even makes comparisons to the railroad and oil barons of the 1800s. Okay, point taken.

The GOP has bones to pick too, arguing that social media’s censorship crosses over into the realm of publishing, theoretically opening the door to libel suits. You may have heard chatter about Section 230 of the 1996 Communications Decency Act, which some politicians are reviewing to see if it can be used to reign in the big social media players.

Careful what you wish for—it could actually make the titans stronger.

How can this backfire?

Start treating social media companies as publishers and you may find that small competitors with tiny legal teams will be dead in the water. In contrast, you know Facebook and Twitter have plenty of lawyers.

Wherever this goes, European regulators want in on the action. The term for the EU’s new Tech targets: “hit list.” First and foremost for regulatory focus
are Facebook, Apple, Amazon and Google. The last one is a top priority, owing to its greater-than-90% share of global search.

The sticky problem with antitrust action directed toward Google? Nobody pays money to use a search engine. You pay with your data. They know more about you than you know about yourself.

Unlike the 1980s’ antitrust push against AT&T, today’s issue is not so much about the consumer but about squeezed-out competitors. For example, using Google to search airfares cuts out travel aggregators like Kayak and Expedia. Google the word “restaurant” and the result is so comprehensive that you may not need to visit OpenTable, the reservations site.

These problems show why the EU’s key goal is to make the giants provide their data troves to competitors. In search, this would seemingly enable Microsoft’s Bing a market share grab.

Tell me: how is society better off if Google dumps a truckload of data on Microsoft’s doorstep? Your guess is as good as mine.

Cross your fingers and pray the scrappy Duck Duck Go search engine rises to the occasion. Yet something tells me “the duck” will not be among the default settings on the iPhone 13.

Apple wants to sever incestuous ties with Google and make the leap into search, too. That means three mom & pop shops in that business: Google, Microsoft and Apple. Who knows? Maybe one day there will be a half dozen players in the industry. After all, the EU is deemphasizing monetary penalties and playing up lending a hand to competitors.

Another concept laid on the table—and remember, we are talking about EU regulators—is extreme circumstance breakup. This one is hard for me to get my mind around. Can you imagine the howl from Washington if Brussels tried to splinter Facebook? If anyone is going to break up American companies, it will be American regulators.

However this plays out, the heat is on, from multiple directions. From Democrats, from Republicans, from the EU. Is it a 2021 story, or are these firms okay for a few years? My suspicion is it is being brought to a boil now.

The table below shows the weights of Facebook, Apple, Amazon and Google-parent Alphabet in the S&P 500 and in our U.S. equity funds. 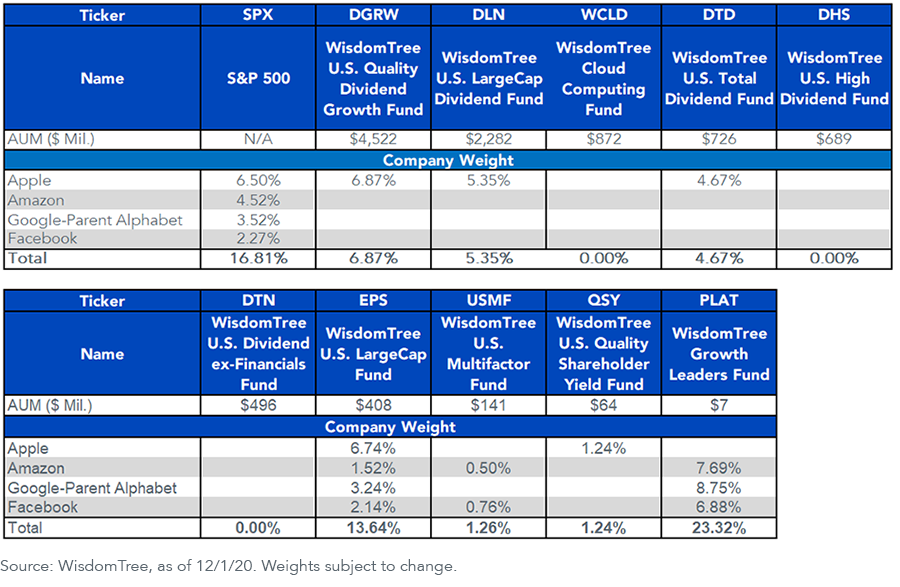 There are risks associated with investing, including the possible loss of principal. Foreign investing involves currency, political and economic risk. Funds focusing on a single country, sector and/or funds that emphasize investments in smaller companies may experience greater price volatility. Investments in emerging or offshore markets are generally less liquid and less efficient than investments in developed markets and are subject to additional risks, such as risks of adverse governmental regulation and intervention or political developments. Investments in currency involve additional special risks, such as credit risk and interest rate fluctuations. Due to the investment strategy of certain Funds, they may make higher capital gain distributions than other ETFs. Please see each Fund’s prospectus for a discussion of risks.