A handful of large companies have come to dominate the weight of the S&P 500 Index. The five largest holdings now account for more weight in the market cap-weighted index than at any time in the past 30 years.

The growing dominance of a few richly valued companies has elevated valuations—lowering future return forecasts—and reduced the diversification benefits of the index. 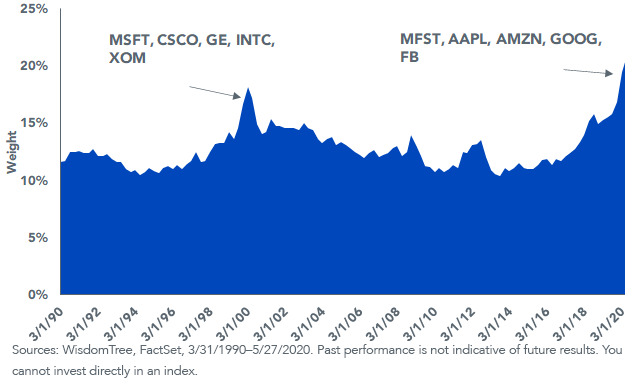 Historic moves in both equity and fixed income markets during the first few months of the year have triggered investors to rebalance asset class allocations—for example, adjusting portfolios to maintain a 60%/40% equity/bond exposure.

While asset class rebalancing is a necessary condition to maintaining a well-diversified portfolio, we believe now is a critical time for investors to consider security selection rebalancing for core U.S. equity allocations. After a run of outperformance by the largest companies, many portfolios are likely dominated by a few names at a scale that has little historical precedent.

An equal-weight portfolio of mid- and large-cap securities—an approach that has historically outperformed value-weighted over the long-run—can mitigate the concentration that exists in market cap-weighted indexes. For some investors, particularly those more reluctant to have dedicated mid- and small-cap exposures, this may be an approach worth considering. 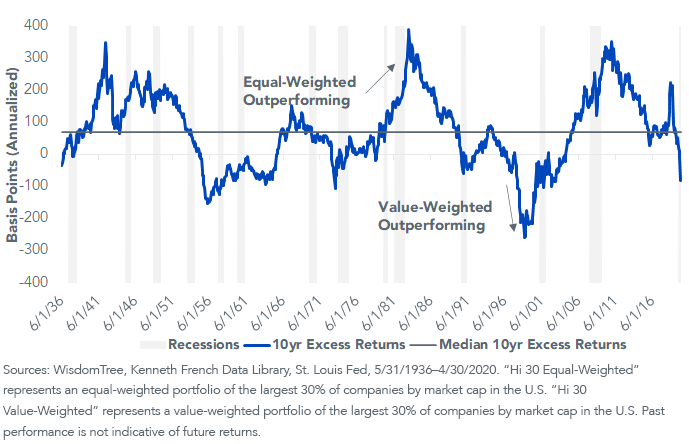 Many recent headlines suggest equity markets are pricing in an overly rosy recovery scenario. The market cap-weighted S&P 500 Index is down less than 10% from its February all-time high—far off the first-quarter lows. But the picture is less sanguine when assessing the recovery by several other major market gauges.

The S&P SmallCap 600 Index, for example, only after strong performance this week emerged from a technical bear market that began in January.1 And the equal-weighted S&P 500 and value-tilted S&P 500 both show that market prices still have significant ground to make up during a recovery.

More than ever before, S&P 500 Index performance is being driven by a narrow subset of companies. Just five companies (Microsoft, Apple, Amazon, Alphabet and Facebook) now make up 20% of the weight of the S&P 500, and over one-third of the S&P 500 Growth Index.

The weight of these companies in the S&P 500 has grown this year, as all have substantially outperformed the broad index returns, exhibiting their resilience during the pandemic.

While it’s difficult to argue this concentration should lead to near-term underperformance for this subset, history suggests it eventually will. In a recent note, Goldman Sachs wrote that “(n)arrow breadth is always resolved the same way: The relative outperformance of market leaders eventually gives way to underperformance.”2

Given heightened valuations for the market cap-weighted index, and that it has outperformed equal weighting by about 75 basis points annualized for the last decade, now may be a good time to add a more equally weighted allocation. And there are a few sound arguments that justify equal weighting outperforming market cap weighting over the long run:

The size exposure and the value tilt can be seen from the factor loadings of a portfolio of equally weighted large-cap securities using returns going back to 1963. Both “Hi 30” portfolios use the Fama-French portfolios of top 30% of securities by market cap.

The equal-weight portfolio has higher risk—as measured by its market beta and standard deviation—which is consistent with its small but positive size loading, as well as a clear value tilt.

Despite what we see as some positive near-term tailwinds to equal weighting, as well as its attractive factor tilts, there are some drawbacks to a simple equal weighting from a portfolio construction context.

The intention of adding a diversifying allocation to a portfolio would be some reduction in risk for each incremental unit of return—an improvement in the portfolio’s Sharpe ratio.

However, this isn’t what occurs with a historical blend of equal-weighted and value-weighted portfolio returns. While returns have been better over the long run for equal weighting, there is no risk reduction benefit that you would typically see from blending two portfolios with lower correlations. 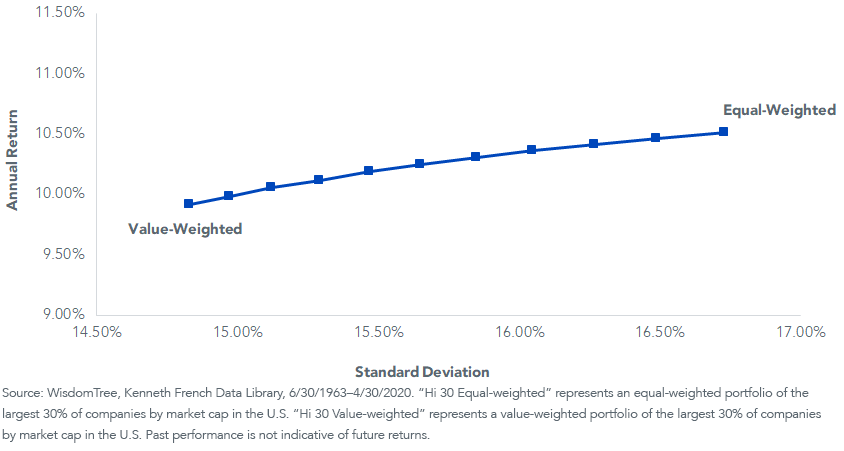 Equal weighting has outperformed market cap-weighting over the long run. While “timing” when that outperformance will occur is a difficult task, we think now is a favorable backdrop given the concentration and heightened valuations of the market cap-weighted benchmark.

However, some of the characteristics of a traditional equal-weighting approach make such an allocation unattractive when paring it with an investor’s core market cap-weighted approach. In a nod to some of the benefits of equal weighting—namely size exposure and diversification—WisdomTree elected for a “modified” equal-weighting approach for its high-active share multifactor model.

In a future post, we’ll highlight how this model aims to improve on some of the drawbacks of simple equal weighting, and how it fills the role of a true portfolio diversifier to a traditional core exposure.