Dazed and Confused? We’ve Got You Covered

Over the last month, the combination of U.S. monetary and fiscal support has come at not only breakneck speed but, perhaps more importantly, at amounts that were almost unimaginable just a few months ago. It could leave an investor feeling dazed and confused.

While the Federal Reserve (Fed) has been grabbing the headlines on an almost daily basis, the news that seems to be flying under the radar is the U.S. government’s recently passed CARES relief package. When I say “under the radar,” I don’t mean the rollout and potential additions to the package. No, I’m referring to something that appears to have garnered scant attention in the bond market — a skyrocketing federal budget deficit. 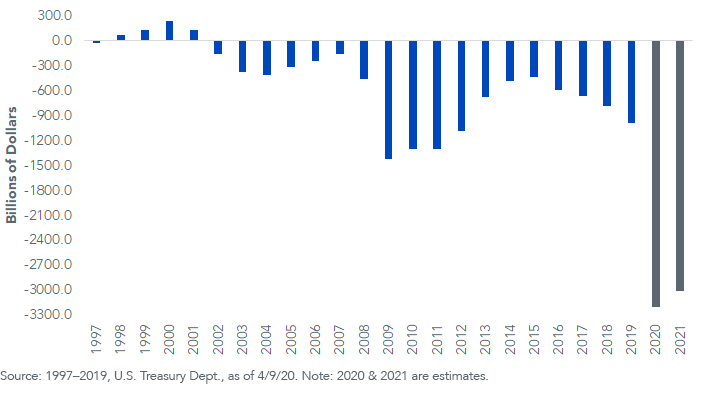 Let’s take a look at the above graph for some perspective. Since reaching a recent “bottom” of $439 billion in 2015, the U.S. budget deficit has been on a steady upward trajectory, peaking at $984 billion for 2019. Prior to the aforementioned CARES package, it was estimated the nation’s shortfall would pierce through the trillion-dollar threshold for 2020, revisiting the 2009–2012 experience. Now, given the $2.2 trillion cost of this latest relief package, not to mention the two others before it, it is reasonable to project an incredible deficit of potentially at least $3.0 trillion for this year and for 2021.

Obviously, the government has to fund this shortfall, so get ready for an explosion in upcoming Treasury supply, consisting of both bills and coupons. In fact, it has already begun. Since a good portion of the relief package is designed for as quick an impact as possible, the clear path for the Treasury is to ratchet up its t-bill issuance. To provide some perspective, the three-month t-bill that was auctioned this week totaled $57 billion, a $15 billion increase from the amount offered March 16. Given the desire of the nation’s debt managers to keep the weighted-average maturity of Treasury (UST) debt relatively constant, combined with the Fed’s quantitative easing (QE) U.S. Treasury purchases, t-bill issuance as a whole could represent two-thirds of the federal government’s financing needs, or up to $2 trillion.

Interestingly, as the markets settled down over the last week or so, the supply/demand dynamic for the three-month t-bill has resulted in a visible increase in yield. After posting a low point of -0.14% a little more than two weeks ago, the yield was right around 0.25% as of this writing, a reversal of nearly 40 basis points (bps).

So, what are fixed income investors to do? We see the two weights of our barbell strategy as solutions to this deficit conundrum:

Unless otherwise stated, all data sourced is Bloomberg as of April 9, 2020.

There are risks involved with investing, including the possible loss of principal. Fixed income investments are subject to interest rate risk; their value will normally decline as interest rates rise. Fixed income investments are also subject to credit risk, the risk that the issuer of a bond will fail to pay interest and principal in a timely manner or that negative perceptions of the issuer’s ability to make such payments will cause the price of that bond to decline. Investing in mortgage- and asset-backed securities involves interest rate, credit, valuation, extension and liquidity risks and the risk that payments on the underlying assets are delayed, prepaid, subordinated or defaulted on. Securities with floating rates can be less sensitive to interest rate changes than securities with fixed interest rates, but may decline in value. The issuance of floating rate notes by the U.S. Treasury is new and the amount of supply will be limited. The value of an investment in the Funds may change quickly and without warning in response to issuer or counterparty defaults and changes in the credit ratings of the Funds’ portfolio investments. Due to the investment strategy of these Funds, they may make higher capital gain distributions than other ETFs. Please read each Fund’s prospectus for a discussion of risks.