Dividend Stability: History as a Guide

As fear spreads throughout the markets, it pays to step back and think about what drives long-term stock returns.

The underlying cash flow of businesses and the cash they return to shareholders—which comes in the form of dividends!

Yes, some dividends will be cut in the upcoming downturn. The market is pricing that in. Many large-cap energy stocks have dividend yields around four times the average dividend yield in the market, indicating these yields are highly suspect.

Just yesterday, Ford became the most notable company to announce a suspension of their quarterly dividend.

But how much might overall market dividends get cut this year?

Let’s let history be our guide.

That characteristic is why Professor Jeremy Siegel refers to stocks as “Super TIPS”— TIPS being the ultimate inflation-adjusted treasury security. Stocks can provide long-term inflation protection, but with real growth to boot. 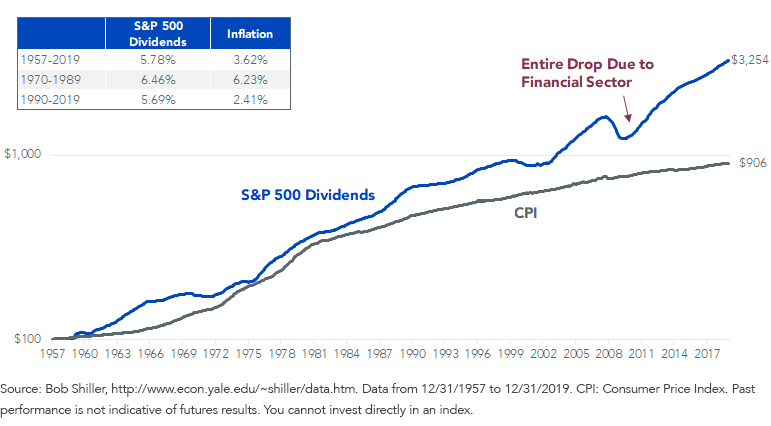 A few things stand out about long-term dividend growth.

In the last 62 years, there were only six years where dividend levels declined, and only one where they fell more than 5%.

By contrast, during those same 62 years, stock prices fell in 18 years, with a worst calendar-year decline of over 40% and an average decline of more than 11%.

The S&P 500 was recently down nearly 30% from its previous high. Daily market price moves between 7% and 10% have been common.

But what are the odds of dividends falling 20% this year, like they did in 2009? 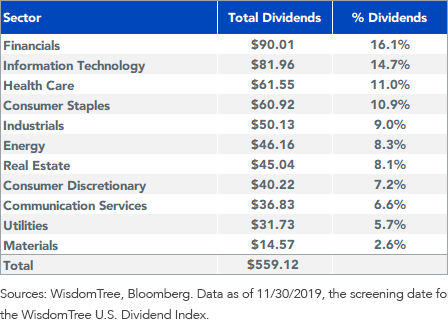 The Dividend Stream® today is much more diversified than it was in 2009, when over 30% of all dividends came from the financial sector. Today, Financials, the largest dividend-paying sector, represent just 16% of all dividends paid.

The next three largest sectors—Technology, Health Care and Consumer Staples—tend to be more immune against dividend cuts and likely three sectors with growth this year.

If aggregate dividends were to decline like they did in ’09, it is also important to remember that it took only 4 years before dividend levels reached new highs after the global financial crisis.

Market prices often move much more than the fundamentals of businesses. Long-term investors should come back to focusing on underlying cash flows from owning equities many years into the future.

1Based on the standard deviation of annual dividend changes and price changes on the S&P 500.