India’s Unconventional Rate Cut and What It Means for Investors

India was in the news recently for completing its mammoth democratic federal elections and a financial budget that was presented in July. Now its central bank (RBI) is in the spotlight for doing an unconventional and aggressive rate cut of 35 basis points (bps).

Let’s look at the RBI’s latest monetary policy direction and what it means for domestic growth and global emerging market (EM) investors.

Rates Now at a Nine-Year Low

The whole world is surrounded by trade frictions and geopolitical uncertainty. India is not immune to these effects and its latest gross domestic product (GDP) reading at 5.8% year over year (YoY) was substantially below what it believes it can achieve. While the International Monetary Fund (IMF) is confident in a 7%+ growth rate for India in the long run, the RBI stepped in to support short-term growth.

A few factors are driving these rate cuts:

What Does It Mean for Domestic Growth?

An RBI rate cut sends a strong signal to banks to cut lending rates. Moments after the RBI’s announcement, the State Bank of India (SBI)—India’s largest bank and lender—also announced an across-the-board cut of 15 bps to its lending rates.

October and November mark a festive season in India, the celebration of Diwali. Diwali is often celebrated with the worship of the goddess of wealth, where most households in India buy consumer goods ranging from electronic gadgets to the latest automobiles. It tends to push industrial production up. As rate cuts by the RBI are passed on by banks to end customers as lower interest rates on personal, auto and home loans, this action is good news for sectors like Consumer Discretionary, Industrials, Manufacturing and Automobiles, and even Financials can benefit from increased economic activity.

The RBI has the right leadership and ample ammunition to give much-needed fire power to propel India’s growth engine forward.

What Does the RBI’s Rate Cut Mean for Investors?

The table below shows the cap-weighted, 30-component SENSEX, which has historically delivered double-digit annual returns with a lag after consecutive rate cut cycles by the RBI. 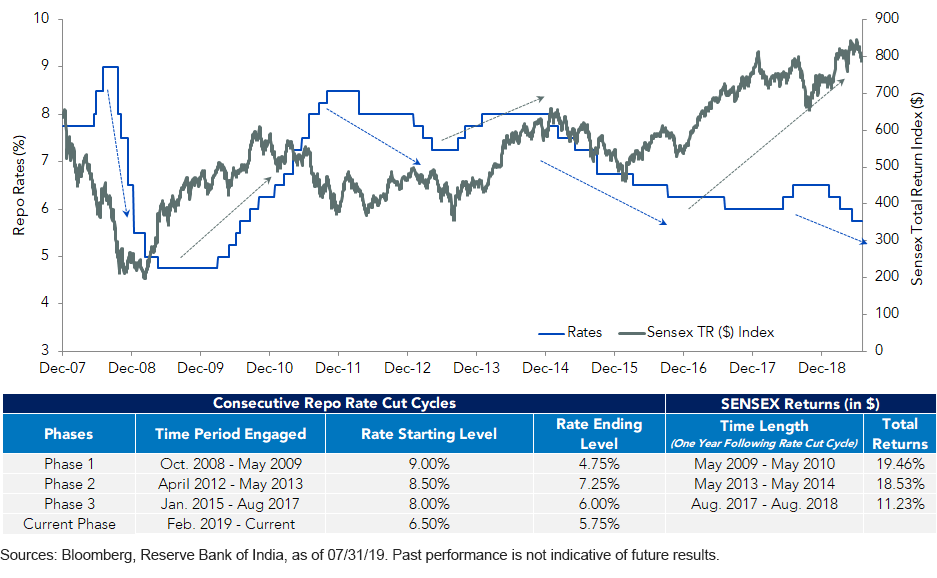 WisdomTree’s India Earning Fund (EPI) gives investors a window to access Indian growth with smarter stock selection. By screening for profitable companies weighted by net earnings at the time of rebalancing, it provides investors with easy, in-depth exposure to profitable portions of this fast-growing economy.

There are risks associated with investing, including possible loss of principal. Foreign investing involves special risks, such as risk of loss from currency fluctuation or political or economic uncertainty. This Fund focuses its investments in India, thereby increasing the impact of events and developments associated with the region, which can adversely affect performance. Investments in emerging, offshore or frontier markets such as India are generally less liquid and less efficient than investments in developed markets and are subject to additional risks, such as risks of adverse governmental regulation and intervention or political developments. As this Fund has a high concentration in some sectors, the Fund can be adversely affected by changes in those sectors. Due to the investment strategy of this Fund, it may make higher capital gain distributions than other ETFs. Please read the Fund’s prospectus for specific details regarding the Fund’s risk profile.

Gaurav Sinha
Associate Director, Asset Allocation and Modern Alpha
Gaurav Sinha is currently working as Asset Allocation Strategist at WisdomTree since November 2014. He is leading the Portfolio Analytics and Solutions team and builds specialized investment solutions along with customized analytics for our clients. He is also deeply involved in advancing WisdomTree’s product suite, and has particular expertise on India. Gaurav came to WisdomTree after stints at World Bank, Morgan Stanley and recently with Windhaven Investment Management. He received his Masters in Financial Engineering from Columbia University in 2009 and holds a bachelors Engineering degree from the prestigious Indian Institute Of Technology (IIT).