Can a weakening yen (JPY) continue to bolster Japanese equity markets? If historical relationships remain intact, the answer may be yes.

The JPY has steadily depreciated against the dollar (USD) this year, losing more than 15% as the worst performing G10 currency.

This isn’t unprecedented, however, considering the headwinds driving the yen lower versus the greenback. The U.S., much like the rest of the global economy, is wrestling with the highest inflation in four decades, rapidly forcing the Federal Reserve into monetary tightening. Speculation about where the rate hike cycle may ultimately conclude over the next 12-24 months is driving the USD higher. Despite some of the highest readings in inflation in the last decade, the Bank of Japan (BoJ) has remained committed to its accommodative policies of negative short-term interest rates and yield curve control. As a result of ever-widening interest rate differentials between the U.S. and Japan, the JPY has weakened dramatically.

The JPY has historically been negatively correlated with Japanese equity markets, owing to the orientation of Japan’s economy toward exporters. Among G10 currencies, it’s also the most negatively correlated to its domestic equity market over the long term, even surpassing the USD on a rolling 10-year basis. Although correlations have increased over the last several months, they remain firmly in negative territory on a rolling 60-month basis. 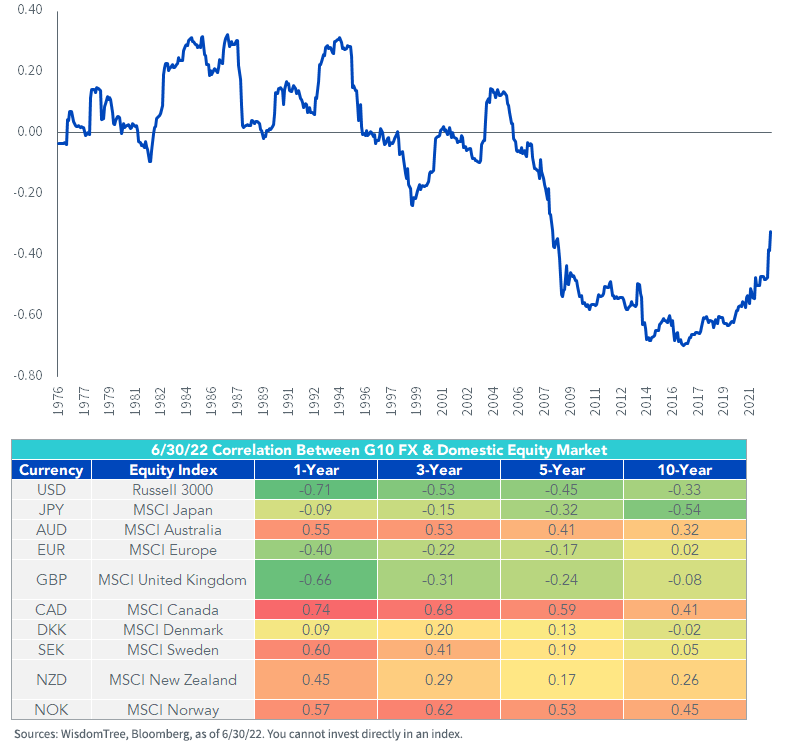 A weaker JPY in this rate environment also encourages currency hedging. With higher interest rates in the U.S., JPY investors derive positive carry by taking currency risk out of their Japanese investments. As the yen weakens further, even more carry is derived. 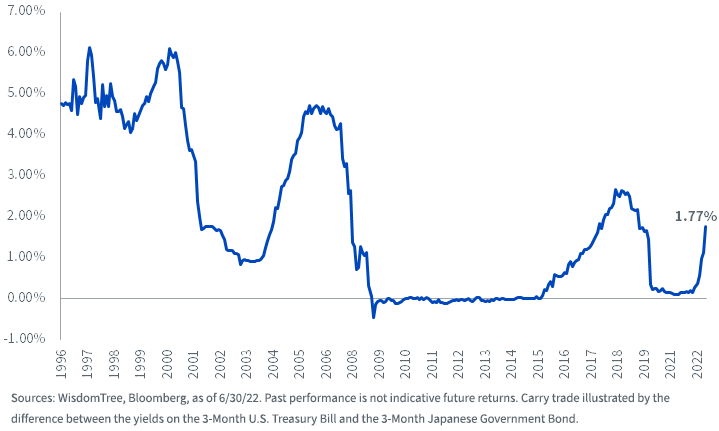 What’s driving this relationship? When analyzing where Japanese companies derive their revenue, we note that only six of eleven sectors in the MSCI Japan Index derive more than 50% of their revenue from the domestic market. Contrast this with China and India, long considered among the world’s foremost exporters, and we see that both countries are even more dependent on their domestic consumers.

No sector in China derives less than 50% of its revenue from outside the country. In India, only two sectors are export-dominant by this threshold.

Korea, a close competitor of Japan’s, is more export-oriented, but may suffer over the near term if the yen continues to weaken. 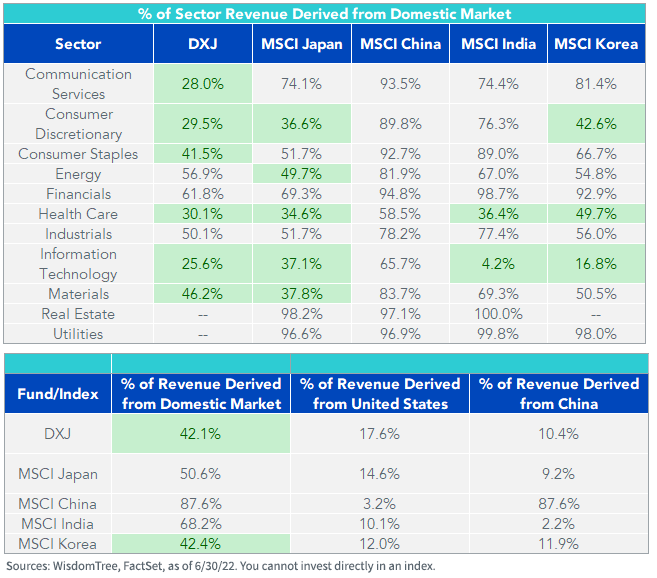 Coupled with a historically weak yen, the export orientation of Japan’s economy may be a catalyst for its equity market for a few reasons.

The BoJ is confronted with low economic growth and rising but relatively unimpactful inflation, forcing it to maintain its dovish stance.

From a growth perspective, Japan has struggled to reignite its economic engines after the COVID-19 pandemic. GDP growth has been underwhelming during the 2020-2021 recovery cycle that many other nations benefitted from.

Meanwhile, year-over-year inflation was recorded at 2.5% at the end of May, which is the highest since mid-2014. It still may not be enough to force the BoJ into a hawkish pivot.

Between low growth and benign inflation, the BoJ is caught between the proverbial rock and a hard place at a time when developed market peers are turning to monetary tightening. Without interest rate hikes on the horizon, many of the headwinds that have already weighed on the yen this year may be exacerbated. Further JPY downside is both plausible and possible.

FX-Hedged Exposure May Be Prudent

The WisdomTree Japan Hedged Equity Fund (DXJ) may be suited for prevailing markets. Designed to attain broad exposure to Japanese dividend-payers, it also screens for companies that derive 80% or less of their revenue from within Japan, to target a global revenue base.

From the tables above, it’s evident that DXJ has even greater revenue diversification than the broader Japanese equity market and that of other large international exporters. Nearly 30% of its total revenue exposure is also centered in the U.S. and China, two of the world’s largest and globalized consumer bases.

Its static currency hedge may protect against further JPY weakening amid ongoing BoJ dovishness as well.

If the second half of 2022 looks anything like the first, then currency-hedged equity exposure in Japan, one of the lone markets where there may be a compelling case for equity appreciation, may prove beneficial.

There are risks associated with investing, including the possible loss of principal. Foreign investing involves special risks, such as risk of loss from currency fluctuation or political or economic uncertainty. The Fund focuses its investments in Japan, thereby increasing the impact of events and developments in Japan that can adversely affect performance. Investments in currency involve additional special risks, such as credit risk, interest rate fluctuations, derivative investments which can be volatile and may be less liquid than other securities, and more sensitive to the effect of varied economic conditions. As this Fund can have a high concentration in some issuers, the Fund can be adversely impacted by changes affecting those issuers. Due to the investment strategy of this Fund it may make higher capital gain distributions than other ETFs. Dividends are not guaranteed, and a company currently paying dividends may cease paying dividends at any time. Please read the Fund’s prospectus for specific details regarding the Fund’s risk profile.