The Japanese equity and currency markets have become interesting again.

In the past few days, the yen has weakened further to a 20-year low to the dollar.

There’s a growing divergence in monetary policy between the U.S. Federal Reserve (Fed), which is on track to hike rates aggressively to fight inflation, and the Bank of Japan (BoJ), which is currently on track to keep short-term rates in negative territory. The BoJ also recently announced unlimited buying of 10-year Japanese government bonds (JGBs) to stem any movement higher in long-term borrowing costs above 25 basis points (bps).

This divergence in policy stance is even more apparent with the Fed’s plan to reduce its large balance sheet through a “fast runoff” that might pressure the long end of the U.S. yield curve higher.

When Japanese rates are so low, many Japanese institutions and retail investors look abroad for carry trades—borrowing in low-yielding yen to fund investments in higher-yielding foreign markets. With short-term interest rates in the U.S. and other global markets pegged near zero over the past several years, investors commonly hedged currency fluctuations—buying yen and selling the paired currency, thus increasing demand for yen.

Hedging costs are now rising along with global short-term rates, particularly in the U.S. This could cause even more yen selling as investors’ demands for dollars increase, and they seek the higher levels of interest rates available in the U.S. markets without hedging the currency’s movements.

Further, our friend Chase Taylor at Pinecone Macro Research published this diagram showing how the commodity inflation feedback loop and Japan’s desire to keep interest rates pegged by buying bonds and issuing currency is causing the yen to weaken. 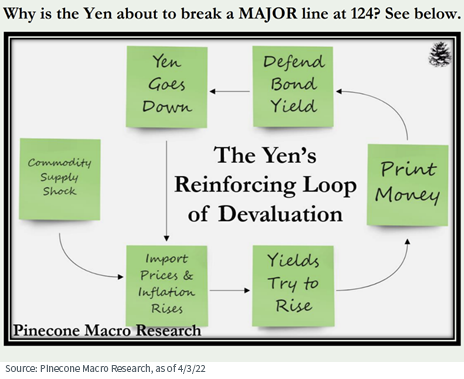 This goes to a point we often make: Currency changes do not need to impact your foreign return, and you can target that local market return by hedging your currency risk.

Japan has now outperformed ACWI in local currency terms by a little more than 300 bps in 2022. 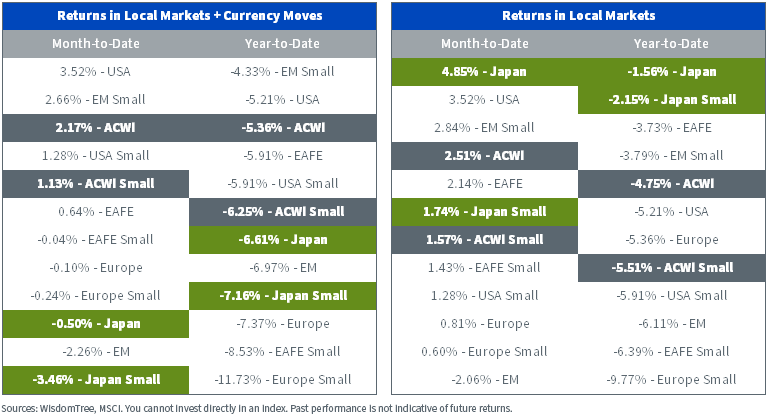 U.S. equity earnings multiples are currently priced at a 20% premium to the historical median, reflecting an economy that is enjoying a robust recovery.

Japan, meanwhile, is priced at a 14% discount to its historical median.

The WisdomTree Japan Hedged Equity Fund (DXJ), which provides broad equity exposure to Japanese dividend-paying companies with an exporter tilt, is valued at lower earnings multiples than the MSCI Japan Index and multiples even lower than the EAFE Value Index. 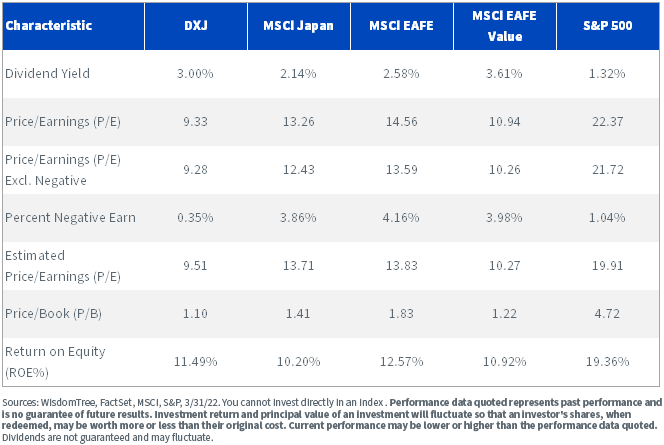 For standardized returns and most recent month-end performance click here.

Japan is a market with a great deal of revenue from the global markets, so a weakening currency can support the profit outlook. DXJ, due to its tilt to exporters, has less than half of its revenue from within Japan. 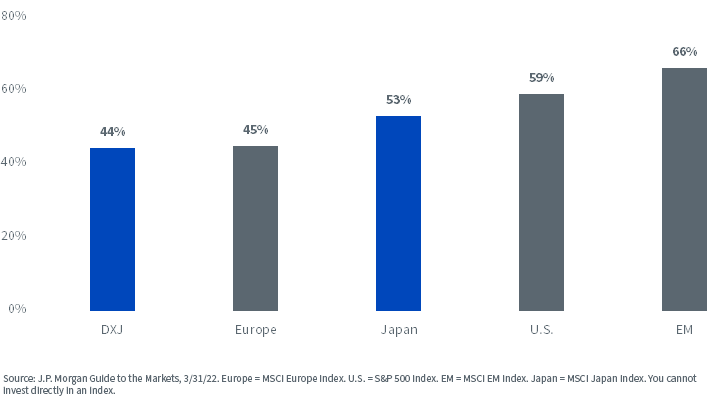 On March 25, in an address to the Japanese parliament, Bank of Japan Governor Haruhiko Kuroda said this about the weakening yen in 2022:

“There is no change in the basic structure that a weaker yen has positive effects on the Japanese economy by pushing up the overall economy and prices.”

A January report from the BOJ estimated that a 10% depreciation in the yen would push up Japan’s GDP by 1%.1

For additional context on earnings sensitivity to the yen, a recent report from Goldman Sachs estimated that if the yen depreciated from 120 USD/JPY to 130 USD/JPY—assuming their base case Brent oil of $125 per barrel—2022 TOPIX EPS growth would increase from 2.8% to 7.7%. 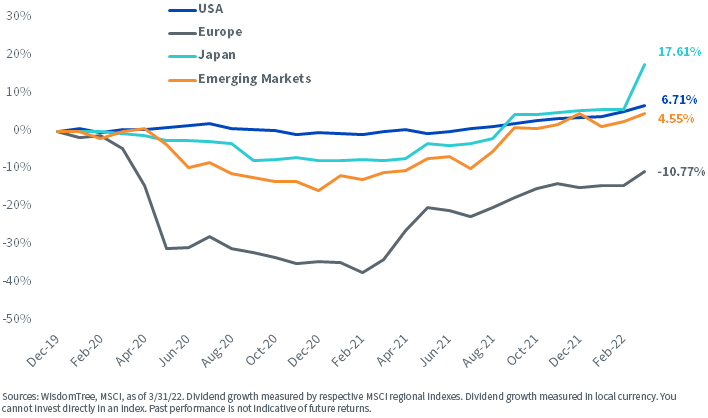 Given the conservative payout ratios of Japanese companies—which helped buffer dividend cuts in 2020—Japan tends to have a lower dividend yield than Europe, where dividend payments can be more cyclical.

The dividend-weighting process of DXJ has improved the Fund’s dividend yield over the MSCI Japan Index by more than 80 bps. 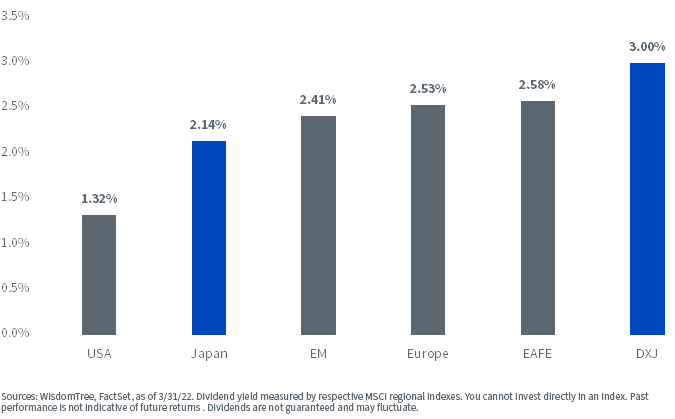 How to Use in a Portfolio Context

While currency hedging was popular in the 2013–2015 period, when the first wave of central bank quantitative easing took place in Japan and Europe and investors made tactical positioning for currency weakness, there is a broader case for currency hedging when it comes to long-run and strategic portfolio allocations.

Looking at trailing volatility over the last 20 years, the recent standard deviation of currency moves ranks in the bottom 6% of observations across all regions (Japan, Europe and MSCI EAFE). But part of this lower volatility was because monetary policy was generally uniform across all regions, with rates anchored around zero. With policy rates now starting to diverge, we will likely see currency volatility tick higher, as we have seen with respect to the recent moves in the yen. 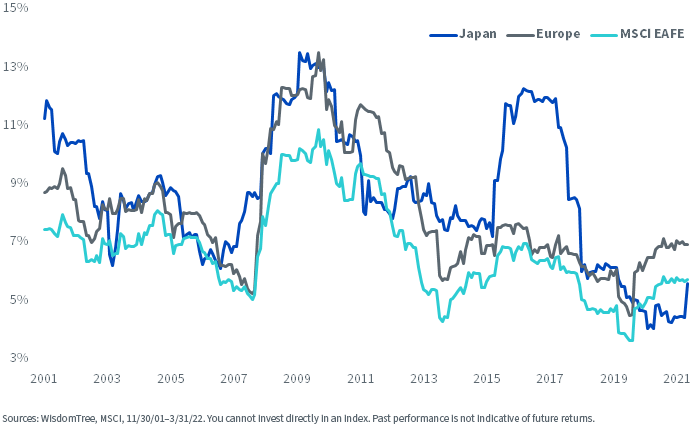 One idea is to blend our currency-hedged Japan Fund (which has very deep value type multiples) with our International Hedged Quality Dividend Growth strategy (IHDG), which also hedges its currency. In the approximate eight years that IHDG has been live, its volatility was considerably lower than the standard benchmark for international stocks that stacks currency on top (MSCI EAFE with forex added).

Japan has been a more volatile market than the broad MSCI EAFE, and many point to its global cyclicality as one cause of that volatility. But, as a market with the lowest multiples utilizing WisdomTree’s dividend approach, DXJ looks well primed for a value rotation and Fed hiking cycle.

For standardized and month-end performance for DXJ and IHDG please click the respective ticker.

1 “Outlook for Economic Activity and Price,” Bank of Japan, January 2022.

There are risks associated with investing, including possible loss of principal. Foreign investing involves special risks, such as risk of loss from currency fluctuation or political or economic uncertainty. The Fund focuses its investments in Japan, thereby increasing the impact of events and developments in Japan that can adversely affect performance. Investments in currency involve additional special risks, such as credit risk, interest rate fluctuations and derivative investments, which can be volatile and may be less liquid than other securities and more sensitive to the effect of varied economic conditions. As this Fund can have a high concentration in some issuers, the Fund can be adversely impacted by changes affecting those issuers. Due to the investment strategy of this Fund, it may make higher capital gain distributions than other ETFs. Dividends are not guaranteed, and a company currently paying dividends may cease paying dividends at any time. Please read the Fund’s prospectus for specific details regarding the Fund’s risk profile.