Amid market volatility last year and now again in 2021, many investors are interested in funds that may dull the pain if the market declines. With the S&P 500 trading at 31 times trailing earnings, it is on more than just a few minds.

Go back to “early COVID-19.” Here are some of the Funds whose declines were less than 1-for-1 with the U.S. stock market.

In the U.S. specifically, the WisdomTree U.S. Quality Dividend Growth Fund (DGRW) had a “good” COVID-19 crash—if good means plunging less than the broad market. Most of the reason DGRW and “cousin” Funds like the WisdomTree International Hedged Quality Dividend Growth Fund (IHDG) held up was their explicit screening for highly profitable stocks, which was critical when sellers pounded low-quality stocks in early COVID-19 days.

Another idea is the WisdomTree CBOE S&P 500 PutWrite Strategy Fund (PUTW). The plan with this one is to participate in a chunk, but not all, of the market’s upside, while not capturing all of the downside, owing to the buffer you get from the monthly option premium on written puts. For example, the correction before COVID-19—which took place from January 26, 2018 to February 8, 2018—saw its NAV decline 6.2% amid a 10.1% decline in the S&P 500. If you want to look into it further the CBOE S&P 500 PutWrite Index goes back to the 1980s.

Considering we are entertaining the possibility of a sustained rally in commodities amid the Fed’s money printing, a deflationary crash is not part of our thesis. Nevertheless, with four big crashes since 1987, I have given plenty of thought over the years to the psychological effect of such big events.

Consider this old warning: “A 50% decline kills your portfolio; you need to double your money to get back to even.”

Think about the dot-com bubble, the second of the four most recent crashes (October 1987, the global financial crisis and COVID-19 being the other three). An investor who “got in” when the NASDAQ touched 2,000 in the late 1990s felt like a genius as that Index touched 5,049. Two years later, the NASDAQ bottomed at 1,114. 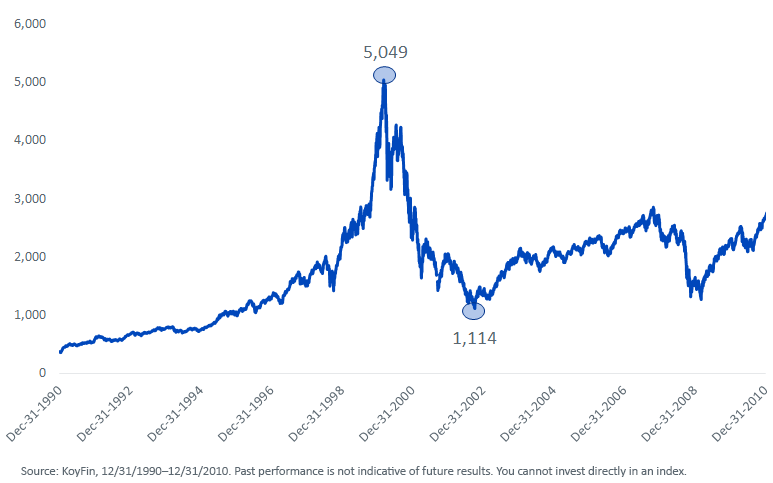 How long did it take them to “get back to even?” Depends on the person. The answer lies in whether their fear was so entrenched that they never came back.

Take two fictitious investment assets in figure 3. In bull markets, investors think they prefer the green one, the volatile asset.

Until the declines come. Compare each asset’s average and compound returns. Which investor is more likely to be shaken out in year 4?

How long did it take to get “back to even?” 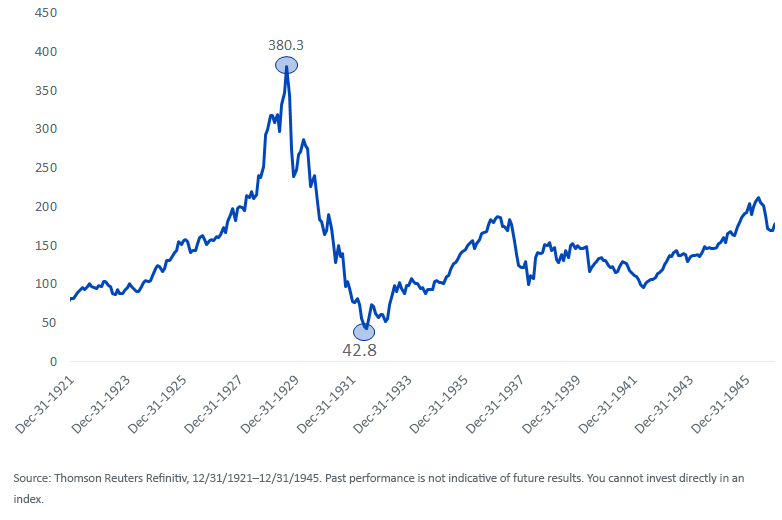 Because there is a very real chance you would have sworn off stocks for life. One bear market and it was game over for the Class of 1929.

Is a crash coming? It’s not my base case, but then again, a global pandemic locking us down for more than a year also wasn’t in anyone’s forecast.

Here is the list again. Will they work out if the declines that started a few weeks ago persist? Maybe, maybe not. But you can start here if you are looking for ideas that helped dull the pain a bit when COVID-19 struck.

There are risks associated with investing, including possible loss of principal.  Funds focusing their investments on certain sectors increase their vulnerability to any single economic or regulatory development.  This may result in greater share price volatility.

PUTW invest in derivatives, including S&P 500 Index put options (“SPX Puts”). Derivative investments can be volatile, and these investments may be less liquid than securities, and more sensitive to the effects of varied economic conditions. The value of the SPX Puts in which PUTW invests is partly based on the volatility used by market participants to price such options (i.e., implied volatility). The options values are partly based on the volatility used by dealers to price such options, so increases in the implied volatility of such options will cause the value of such options to increase, which will result in a corresponding increase in the liabilities of PUTW and a decrease in PUTW’s NAV. Options may be subject to volatile swings in price influenced by changes in the value of the underlying instrument. The potential return to PUTW is limited to the amount of option premiums it receives; however, PUTW can potentially lose up to the entire strike price of each option it sells.

Investments in non-U.S. securities involve political, regulatory, and economic risks that may not be present in U.S. securities. For example, foreign securities may be subject to risk of loss due to foreign currency fluctuations, political or economic instability, or geographic events that adversely impact issuers of foreign securities. Derivatives used by DWMF to offset exposure to foreign currencies may not perform as intended. There can be no assurance that hedging transactions will be effective. The value of an investment in DWMF could be significantly and negatively impacted if foreign currencies appreciate at the same time that the value of a Fund's equity holdings falls. While DWMF is actively managed, the Fund's investment process is expected to be heavily dependent on quantitative models and the models may not perform as intended.

Investments in currency involve additional special risks, such as credit risk and interest rate fluctuations.  Derivative investments can be volatile and these investments may be less liquid than other securities, and more sensitive to the effect of varied economic conditions.  As this Fund can have a high concentration in some issuers, the Fund can be adversely impacted by changes affecting those issuers.  The Fund invests in the securities included in, or representative of, its Index regardless of their investment merit and the Fund does not attempt to outperform its Index or take defensive positions in declining markets.

Due to the investment strategy of these Funds, it may make higher capital gain distributions than other ETFs. Please read each Fund’s prospectus for specific details regarding the Fund’s risk profile.