Last week, I discussed the debate regarding Federal Reserve (Fed) policy and negative rates. In this week’s blog, I wanted to follow up on the “negative rate” theme, specifically as it relates to U.S. Treasury (UST) t-bill rates.

I have found there is little knowledge surrounding the fact that Treasury has an auction rule whereby t-bill yields can’t go negative at the actual auction itself. By rule, the lowest threshold for the high discount rate that is awarded is zero. The accompanying graph highlights where the 3-month t-bill rate has come in at the weekly auction for the last 12 months. 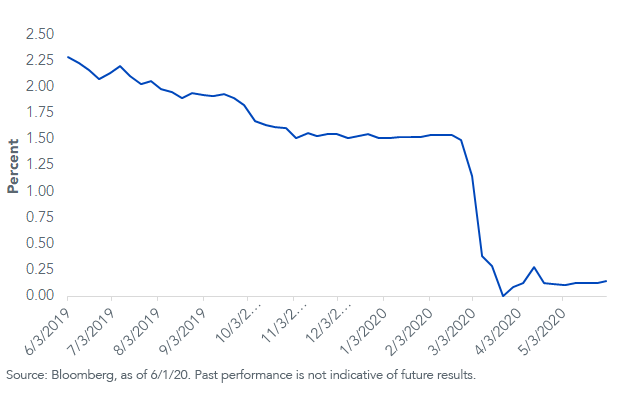 Obviously, it has dropped considerably, but this is merely a reflection of the Fed’s rate-cutting policy that went into effect beginning in July of last year. In fact, the decline was pretty “orderly” until March, when the policymakers took dramatic action and dropped the Fed Funds target from 1.50%–1.75% to its current range of 0–0.25%.

If you look closely, the three-month t-bill auction rate did touch zero at the March 23 auction, but rose to 0.15% at this week’s auction, a touch above the current Fed Funds target mid-point. Interestingly, around the same time the auction produced a “zero” rate, the three-month t-bill yield in the secondary market did briefly drop into negative territory. During the 3/18–3/27 period, the yield was negative each day, reaching a low point of -0.14%.

Looking ahead, I suspect the three-month t-bill yield could gravitate a bit higher. T-bills have been, and will most likely continue to be, the nation’s debt managers’ workhorse when it comes to Treasury financing. The three-month weekly auction size has already increased by a whopping $21 billion since March. Remember, the budget deficit is already swelling to more than $3 trillion, and it will most likely go even higher if Congress passes another rescue package this summer. Do I hear a $4 trillion deficit? This has to be funded—guess what instrument will continue to be overworked? That’s right, t-bills. Thus, if safe-haven demand begins to lessen (we’re seeing signs of this already), the supply/demand dynamic could very well shift, pushing yields higher, accordingly.

Bottom line: For fixed income portfolios, we continue to advocate a barbell approach where the ultra-short/short duration component utilizes a Treasury floating rate strategy. Treasury FRNs are reset each week with the UST three-month t-bill auction. The WisdomTree Floating Rate Treasury Fund (USFR) provides investors with the opportunity to take advantage of the t-bill auction rule I laid out here, and it may serve as principal protection as well. The WisdomTree Yield Enhanced U.S. Aggregate Bond Fund (AGGY) is the other side of the barbell, adding to the balance with long-term income potential.

Unless otherwise stated, data source is Bloomberg, as of June 1, 2020.

There are risks associated with investing, including possible loss of principal. Securities with floating rates can be less sensitive to interest rate changes than securities with fixed interest rates, but may decline in value. The issuance of floating rate notes by the U.S. Treasury is new, and the amount of supply will be limited. Fixed income securities will normally decline in value as interest rates rise. The value of an investment in the Fund may change quickly and without warning in response to issuer or counterparty defaults and changes in the credit ratings of the Fund’s portfolio investments. Fixed income investments are also subject to credit risk, the risk that the issuer of a bond will fail to pay interest and principal in a timely manner, or that negative perceptions of the issuer’s ability to make such payments will cause the price of that bond to decline. Investing in mortgage- and asset-backed securities involves interest rate, credit, valuation, extension and liquidity risks and the risk that payments on the underlying assets are delayed, prepaid, subordinated or defaulted on. Due to the investment strategy of these Funds, they may make higher capital gain distributions than other ETFs. Please read each Fund’s prospectus for specific details regarding the Fund’s risk profile.