Don’t Go All Negative on Me

Given the current state of the U.S. economy and the prior dislocations in the money and bond markets, there has been an increasing amount of chatter regarding whether the Federal Reserve (Fed) would actually consider pushing the Fed Funds rate into negative territory. I only have one thing to say to Chairman Powell & Co.: Don’t go all negative on me!

For all intents and purposes, at least at the present time, it would appear as if the Fed is listening to me (even though I have no direct line to them). Indeed, various Fed officials, including Powell himself, have recently come out and stated that “the committee’s view on negative rates really has not changed. This is not something we’re looking at.” Interestingly, the Chairman mentioned that “in October all 17 senior Fed officials who meet to discuss interest rates agreed that negative rates was not currently an attractive monetary policy,” noting that a unanimous view such as this is not something you see “very often.” 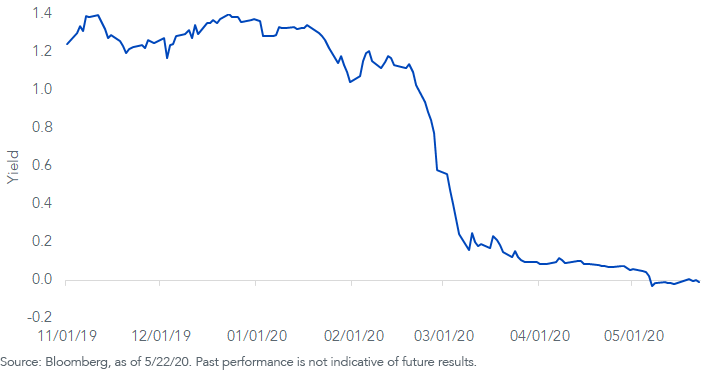 Certainly, there are fans of this approach, with both Europe and Japan already moving into negative-rate territory. However, in my opinion and to quote Powell one more time, “the evidence on the effectiveness is very mixed.” Personally, I think “mixed” is being too kind. Think about it: What have negative rates done for the economies of Japan or Europe? Exactly.

That hasn’t stopped Fed Funds Futures from predicting negative rates. As recently as a few weeks ago, futures were predicting the Fed would go negative by the end of this year. While that move lasted for a day, the futures contract for June 2021 is still flirting below the zero threshold, as of this writing. In other words, the debate is ongoing.

A key concern for the Fed would be the interruption in the deposit/lending function of the banking system. Another unintended consequence would be for the funding markets and money market funds (MMFs). If the Fed were to pursue a negative Fed Funds target, U.S. short-term rates would surely follow suit. As a result, it would be highly likely that MMF yields would also go negative. If you’re an investor, why get penalized? Why not just hold “real” cash (think William Devane, but instead of gold, actual dollars)? These withdrawals could then have potentially adverse ripple effects on the funding markets because fewer funds would then be available. Now, we have seen t-bill rates go negative, but it was for a very short-lived period of time. Any elongated phase would seemingly be far more disruptive. For the record, the size of the MMF markets in both Japan and the Eurozone pale in comparison to the U.S.

Bottom line: So, where do we go from here? For now, I’ll take the Fed at their word with any potential additional policy action coming in the way of forward guidance on rates (timelines, econ targets getting hit, etc.), as well as asset purchases. That being said, the COVID-19 pandemic has already pushed the policymakers into uncharted territory. However, I think the Fed would really, really, really like to avoid negative rates at all costs at this point.

Unless otherwise stated, data source is Bloomberg, as of May 22, 2020.