Several public cloud stocks slid to new 52-week lows recently, at least prior to a sharp rally during the week ended November 11, 2022. How is this software-as-a-service (SaaS) stock slash different from what we experienced in Q1? Two graphs explain the ensuing chaos and what might lie ahead.

This post was originally authored by Janelle Teng (Vice President at Bessemer Venture Partners) on November 9, 2022, and published in her newsletter on Substack.1 Some adjustments have been made to consider the investor perspective instead of the founder perspective. We have also adjusted some of the tenses to account for the time of publication.

Cloud carnage continued in the public markets recently as the Fed announced another 75-basis-point rate hike. The BVP Nasdaq Emerging Cloud Index (EMCLOUD) closed out the week ended November 4, 2022, with one of its worst weekly declines (-14.74%) on record.2 Several marquee names shed more than a quarter of their market cap in a single day. A similar somber mood reverberated through the private markets as various cloud startups announced layoffs, the most notable being Stripe (the world’s highest-valued cloud company).

When I first wrote about the “SaaSacre” in April 2022, the average EMCLOUD forward revenue multiple was ~10.5x, already down 62% from record highs in early 2021. The average EMCLOUD company is now trading at ~4.8x enterprise value to next 12 months (EV/NTM) revenue.3

What is driving the continued SaaSacre? Is this wave different? How should we think about multiples in a stable state? What does this mean for growth-stage cloud startups?

Earlier in the year, I wrote about how the Fed raising interest rates in March 2022 (for the first time since 2018) to curb inflation catalyzed a fierce SaaS sell-off. I explained that growth stocks tend to be disproportionately impacted by such hikes as they derive a greater portion of their value from longer-term future earnings. Put another way: the present value of future cash flows is more significantly discounted in a setting of rising interest rates.

As seen in figure 1, since March, despite the Fed’s efforts, inflation has still been elevated. As a result, Fed Chair Jerome Powell said recently that “we still have some ways to go, and incoming data since our last meeting suggest that the ultimate level of interest rates will be higher than previously expected.” He stated that the Fed will continue to raise rates to “a level that’s sufficiently restrictive to bring inflation to our 2% target over time.” Correspondingly, the markets moved in response to these comments. But why did the cloud cohort suffer a more adverse reaction than other market indexes? 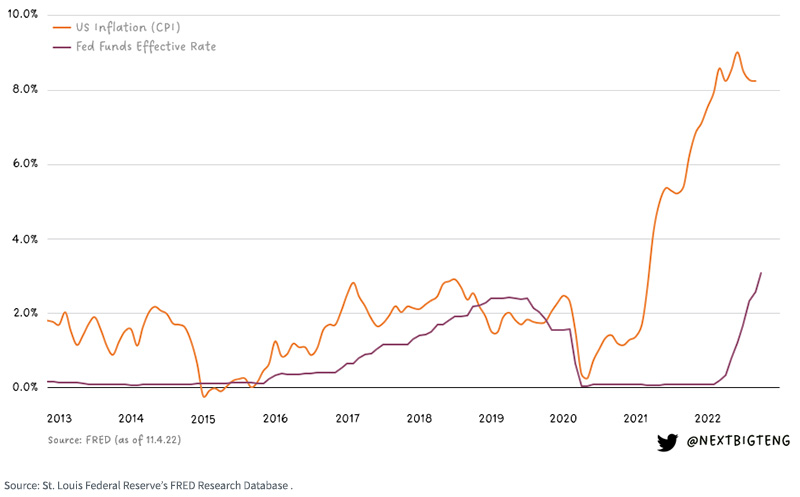 I’ve already put forth that interest rates govern multiples—this is what Brad Gerstner from Altimeter calls the “Iron Law of Investing4”—and you can see this pronounced inverse relationship in figure 2. But unlike earlier in the year, I observe a new perturbing  dynamic that (again) exerts a disproportionate impact on cloud stocks: As interest rates (i.e., risk-free rates) keep rising, the conversation increasingly rotates toward a fundamental question about whether cloud stocks offer a sufficient equity risk premium (i.e., the additional return that stocks are expected to earn in excess of the guaranteed return from “riskless” bonds over the long term) to compensate for risk and make this an attractive investment opportunity compared to other assets.

For investors, the trade-off is now not just about growth stocks versus other types of stocks (such as value stocks) but also between “risk-free” Treasury bills and equities. Investors who want tech or SaaS exposure could also consider “moderate-risk” corporate bonds of high-quality cloud companies as a more compelling alternative to holding the stock.

Macro Squeeze on Fundamentals and Earnings

In the first wave of the SaaSacre in 1Q’22, cloud fundamentals were still solid, with the average EMCLOUD efficiency score at 45.4% (i.e., above the Rule of 405). Cooling investor sentiment earlier in the year was linked to a macro story around discount rates causing valuations to reset rather than trepidations about the health of the economy and fundamentals.

Midway through this year, I wrote about how cloud leaders were starting to take heed of mounting macro headwinds driving recession concerns that could impinge on fundamentals. We saw some early signals of this, which I highlighted in my 2Q’22 Cloud Earnings Recap, where companies began noticing elongated sales cycles and pockets of softening demand.6

We are now seeing a full-blown macro impact on fundamentals that investors are starting to react to. An example is Atlassian, which noted in its recent communication of quarterly results that “last quarter, we shared that we saw a decrease in the rate of Free instances converting to paid plans. That trend became more pronounced in Q1” and “this quarter, we started to see a slowing in the rate of paid user growth from existing customers.” As Jason Lemkin of SaaStr noted from the examples of Datadog and ZoomInfo, which both reported recently, even companies from categories perceived to be “resilient” are seeing real headwinds.7

How Should We Think about Multiples in Stable State?

When and where will multiples stabilize at? Going back to the “Iron Law of Investing,” your view on where multiples will land will be largely defined by your perspective on 1) terminal interest rate (as this will inform your regression) and 2) how long this environment will last (and how that relates to a given target holding period).

In figure 4, we see one perspective with data from The Daily Shot: following Powell’s briefing, traders in the futures market were anticipating that the Fed Funds Rate would peak at over 5% by May 2023.9 From figure 4, traders are expecting that rates will remain elevated for longer and stabilize at a higher level than previous expectations. Ultimately, when conducting your regression of where multiples will land, it is important to account for the fact that the 2020–2021 period was an atypical near 0% rate environment.

Parting Note: Margins Matter More Than Ever Before

Earlier in the year, my colleagues dove deeply into the resilience of the cloud model.10 I see us at the precipice of an era where cloud businesses will now demonstrate the full extent of how remarkably operationally efficient this model can be. Over the past several months, we have been harping on how growth at all costs is no longer rewarded and how profitability is en vogue again.11 As cloud companies set a higher bar for what it means to be successful as an efficient software business, I believe this is where we see the paradigm very palpably shift to focus on multiples being pegged to bottom-line metrics rather than just a top-line driver.

This fundamental shift will cause shockwaves and require a lot of introspection and reevaluation from everyone in the ecosystem, operators and investors alike. This may be painful. And following the cloud carnage, there are now far fewer EMCLOUD companies with market caps greater than $10 billion and even less with market caps greater than $100 billion (both above the Rule of 40 and driving significant free cash flow margins)… Let that sink in.

This post and the information presented are intended for informational purposes only. The views expressed herein are the author’s alone and do not constitute an offer to sell, a recommendation to purchase or a solicitation of an offer to buy any security, nor a recommendation for any investment product or service. While certain information contained herein has been obtained from sources believed to be reliable, neither the author nor any of her employers or their affiliates have independently verified this information, and its accuracy and completeness cannot be guaranteed. Accordingly, no representation or warranty, express or implied, is made as to, and no reliance should be placed on, the fairness, accuracy, timeliness or completeness of this information. The author and all employers and their affiliated persons assume no liability for this information and no obligation to update the information or analysis contained herein in the future.

+ Cloud Computing—What Are the Big Players Telling Us?

+ Data Centers Are the Physical Backbone of Digital Life

All Posts
About the Contributor