What a stark separation between the view of the world from Wall Street and from Main Street.

With bonds catching a rally in recent months while the S&P 500 posts a year-to-date gain of 18%, it appears to be the best of times for investors. Cashed up from working at home and with assets in our portfolios rallying, many in this business have fallen into the trap of internalizing last quarter’s 6.5% annualized GDP growth and assuming Main Street sees the same rosy scene.

But the person who bags groceries isn’t buying it.

CNBC’s July All-America survey is remarkable. On the economy, over half of respondents declared they are “pessimistic now and for the future,” the highest reading since 2015.

More troubling, that’s about double the proportion who said the same thing less than a year ago. I’m afraid to ask: what would be the response of middle class respondents if 401(k) balances were actually going down?

What could catalyze problems in the stock market come autumn? The word in epidemiology circles is that the COVID-19 delta variant, in the absence of herd immunity, has a reproduction rate akin to that of chicken pox. The market is hyper-focused on the variant’s effect on consumer psychology and everyday activity. If New York City’s new COVID passport rule is a trend indicator, some in the market may worry that schools could go virtual again, exacerbating the system’s labor shortages and supply chain woes.

In my personal view there could be a more optimistic outcome to our delta variant future, owing to the experience of the first industrialized nation hit with it: Britain. Epidemiologists view this variant as highly contagious relative to prior iterations, so despite most Britons being vaccinated, it was with little surprise that delta sent U.K. cases spiraling in May and June. It started to fizzle down come mid-July (figure 2). Troublingly, the case count decline appears to have stopped in the last week or so, but for now Britain appears to have seen the worst of it. 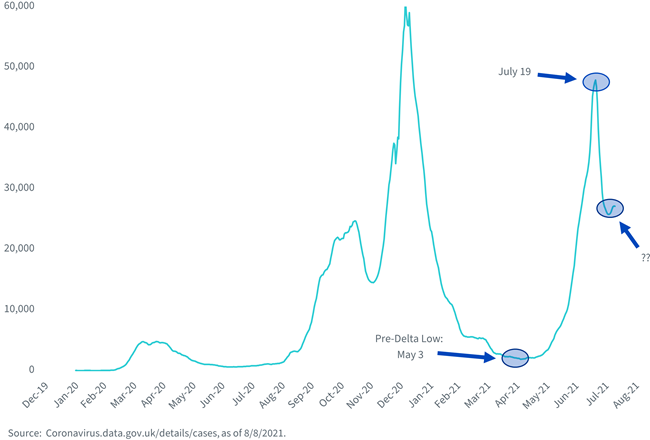 If the Brits’ experience were to repeat in the U.S., you can extrapolate something like 2.5 months from trough-to-peak, with the commencement having occurred back in the third week of June. But make sure to account for vaccination rates; about 69% of Britons are at least partially vaccinated, whereas the U.S. rate is 59%, according to Our World in Data. Nevertheless, the worst of delta could come some time around Labor Day. In other words, we may be closer to the end of this wave than the beginning.

Because of this view, the risk of contagion from the Chinese stock market’s losses over the last half year are a bigger concern to me at the moment than COVID-19.

While the S&P 500 continues to make all-time highs above 4,400, it is difficult to look the other way when you know that Tencent, China’s largest conglomerate, has slumped 36% over a half year. 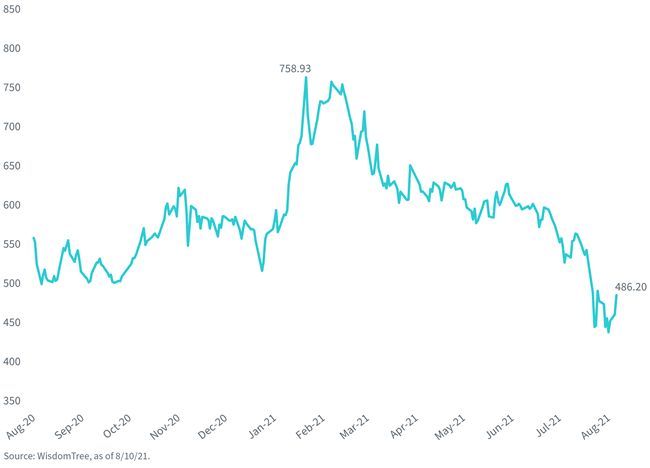 Tencent is not alone. Alibaba—China’s equivalent of Amazon—has lost 37% of its value, owing to the Chinese Communist Party’s flirtations with anti-trust legislation and the “disappearing” in late 2020 of its outspoken, flamboyant founder, Jack Ma.

Together, these giants comprise a quarter of the Chinese stock market.

The risk to U.S. equities is that investors see large Chinese stocks that were trading for 30 times earnings a half year ago now being on offer for a multiple of, say, 15–20 times, calling into question the valuations they are paying for Silicon Valley dynamos and other market leaders.

This is a particularly acute issue in the S&P 500 Growth index, correlated as its major components’ business models are with those of the Chinese mega-firms.

Combine Apple, Microsoft, Amazon, Facebook and Google-parent Alphabet and you get to 41% of the S&P 500 Growth index allocated to just those five companies.

Think about this completely unrelated hypothetical: if a German or Japanese banking giant tumbled 30%–50%, while the German or Japanese stock market followed it right on down, would you start to wonder whether your Bank of America stake will keep making new highs?

This is where my mind is right now: while the market is focusing on the delta variant, investors might want to pay closer attention to the effect of Chinese stock market losses on equities in other domiciles.

If Chinese stocks cannot get their act together, the unwanted “October surprise” could be a rerating of U.S. equity valuations in response to now-reduced peer valuations.

I have two WisdomTree ideas for you to investigate.

One is DGRW, the WisdomTree U.S. Quality Dividend Growth Fund. It has no exposure to firms like Facebook and Alphabet, both of which may be viewed as U.S. proxies for some of China’s most punished stocks. However, it does have Microsoft and Apple. (For a list of Fund holding and weightings please click here.)

Now let me scare you out of the room: it’s a Japan fund.

But if you have an open mind to Japanese equities, I encourage you to go back and look at all the corrections and crashes since it launched in 2006. You may possibly find it to be a play for downside risk management, if you think this autumn will bring cold winds. The name is the WisdomTree Japan SmallCap Dividend Fund (DFJ).

Past performance is no assurance of future results and there is no guarantee that any investment will achieve its objectives, generate positive returns, or avoid losses.

Foreign investing involves special risks, such as risk of loss from currency fluctuation or political or economic uncertainty. Funds focusing their investments on smaller companies or certain sectors increase their vulnerability to any single economic or regulatory development. The Fund focuses its investments in Japan, thereby increasing the impact of events and developments in Japan that can adversely affect performance. This may result in greater share price volatility. Please read the Fund’s prospectus for specific details regarding the Fund’s risk profile.