Over the last few weeks, U.S. equities have staged a reversal within the very markets that have been this year’s most reliable trade.

Until recently, small caps were this year’s darling, comfortably outperforming their large-cap brethren as the economic recovery manifested. The S&P SmallCap 600 finished the first half strong, posting its best performance through the first six months of any year since it was created. 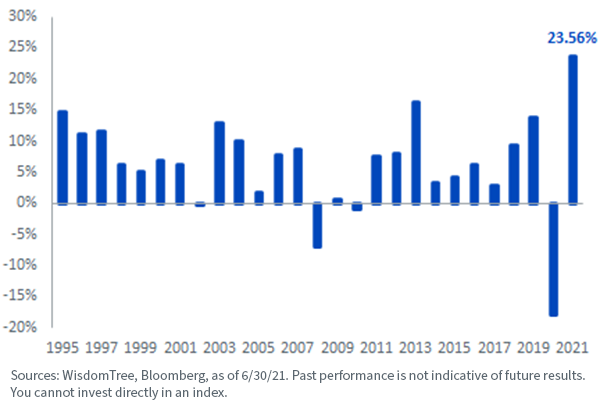 But the proverbial tortoise caught up to the hare at the start of the second half, as the S&P 500 Index virtually erased its underperformance relative to the S&P SmallCap 600 over the last two weeks.

The change in market leadership is the result of a number of factors: surging cases of the COVID-19 delta variant, impressive Q2 earnings results from large-cap stalwarts and perhaps even some small-cap investors booking gains after a stellar first half.

No matter the narrative, however, there are already significant implications of the swift, sudden reversal. One cautionary flag is already being waved: after their recent rally, U.S. large caps are the most expensive they have ever been, relative to small caps, since the 2001 tech bubble. 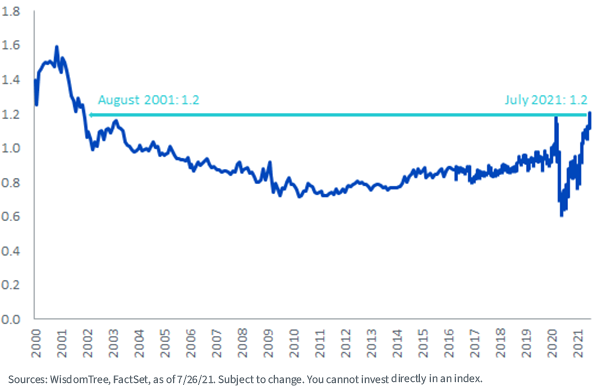 Specifically, the forward P/E of the S&P 500 relative to that of the S&P SmallCap 600 is measuring at levels last seen at the end of the 2001. Similar relative valuations temporarily spiked at the onset of the COVID-19 pandemic in March 2020 but corrected quickly.

The recent run-up would be less concerning if the gauge was less than 1. Historically, large caps often commanded a lower valuation than small caps, since the latter were perceived to be riskier (hence, lower earnings in the ratio’s denominator). The former, with higher earnings and perceived relative safety, had their valuations kept in check.

But this trend has also been reversed, with large caps now trading at a forward P/E premium to small caps of about 20%. If history is any indication, this may signal that there are frothy and bloated valuations in the large-cap market, with small caps perhaps due for a tailwind or the former for a correction.

It’s hard to ignore the opportunity that this creates for small caps, and only reinforces our optimism on the “reopening” trade: bullish on cyclical sectors, value and small caps. While fears over the surging COVID-19 delta variant have given investors pause, we think that this may just delay the economic recovery, rather than derail it.

Once fears of the delta variant subside and the recovery continues, we believe that small caps may continue this year’s upward trajectory as important pieces of the economic recovery. Until then, be wary of prevailing large-cap valuations in your portfolio.

+ Taking the Pulse of Small-Cap Valuations

+ This Summer Poses a Headwind for Stocks with Distant Earnings