For outsiders, it is common to view China as monolithic, with its central government dominating international news.

When we map the WisdomTree China ex-State-Owned Enterprises (ex-SOE) Index weight onto each province where companies are headquartered, it shows more weight in China’s southeastern region, which is generally believed to be more entrepreneur-oriented and better governed.

This geography concentration highlights  the cultural element that comes from removing state-owned enterprises, which may lead to better corporate governance and a more interesting basket of companies than traditional market cap-weighted benchmarks1. 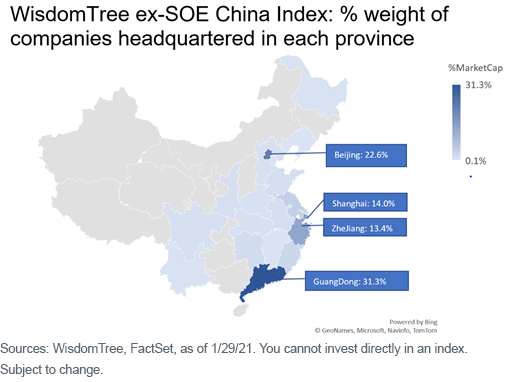 China has a significant north-south divide in its economy and culture. This divide has been around for a while. Using data during the Qing Dynasty (1644–1911), historians collected the number of top-ranked students in national exams for counties within each province as a measure for human capital. The top provinces are either located near Beijing or in the Yangtze River delta area, with Jiangsu and ZheJiang provinces ranking consistently among the top five.

For historical reasons, the southeastern area is believed to be better governed, with more trust preserved in the community due to the common local languages and its own extended social network. Capital from Taiwan flowed significantly to ZheJiang province after 1980 through these networks. Financial capital from Hong Kong flowed toward GuangDong province around that time.

The north-south divide is also reflected in an episode of China’s own, “Do you trust Chinese data?” drama. As more high-frequency data becomes available, official Chinese GDP data has become a secondary source when gauging the Chinese economy.

We often hear questions about what ex-state-owned factor we are betting on. Clearly, compared to the SOE sector, it’s a bet on growth and quality for the ex-SOE sector, with generally higher sales and revenue growth and higher return on equity (ROE).

We believe it is not just about growth and quality, but also other factors that are harder to measure but extremely important in emerging markets for private business success: relatively better governance, both within the company and within local governments and in their interactions with private businesses.

These cultural factors are one of the reasons we think the innovation and growth contained within the ex-SOE tilt will be long-lasting.

1About 22 companies and 4.7% weight in WisdomTree’s Index listed Hong Kong as their headquarters. It is well known many chose Hong Kong for listing and tax purposes, and some of these companies are relabeled to reflect the true company headquarter province when clear information dictates this change. There are 59 companies (9.3% weight within the MSCI China Index) in a similar situation that have been reclassified. Most Chinese companies are young and headquartered in the provinces where they were founded. So far, it is uncommon to move headquarters across provincial lines.