One of the market implications of the COVID-19 pandemic has been the remarkable performance of large-cap growth and technology names, particularly those impacted by the work-from-home trend and cloud computing, and the underperformance of small-cap stocks that were more or less shut down during the economic lockdowns.

Positive vaccine news boosted hopes for an economic reopening in 2021, which flipped market signals, and small caps and value stocks rallied strongly in November. The Russell 2000 Index, a gauge of U.S. small-cap equity performance, delivered some of the strongest gains in its history.

Ben Carlson, author of the blog “A Wealth of Common Sense,” has evaluated what happened in the aftermath of past small-cap surges, like the one we saw in November.

While the future is always uncertain, the data makes a strong case that we had an inflection point for small-cap stocks—and that while investors will inevitably feel they ‘missed’ this large turn, this past analysis indicates there’s reason to believe more is to come.

Figure 1: Small Caps Have a Compelling Track Record after Rallies 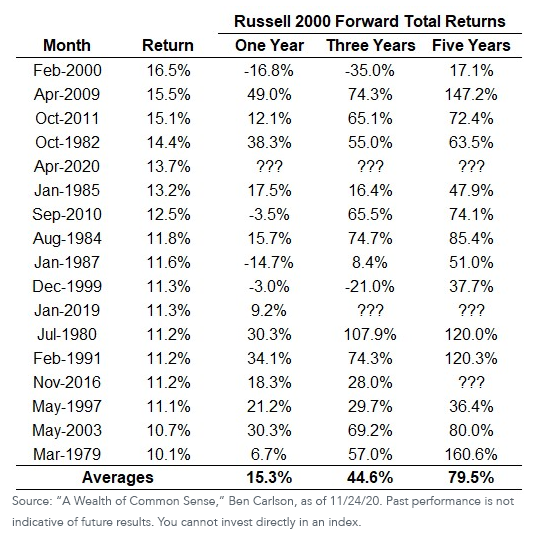 There is also research that suggests January is a particularly strong time for the performance of small-cap stocks. This “January Effect” does not work every year, and small caps generally have faced a tough stretch for quite an extended period.

But some of the arguments for why small caps perform well in January may be relevant this year. In years with large drawdowns, there can be some sharp tax loss selling. This drives prices down even further and below their fair value, resulting in them snapping back in January to correct for that selling as investors reestablish positions.

WisdomTree rebalances its fundamentally weighted indexes in late December to capitalize on similar trends of selling unrelated to corporate fundamentals creating noise and opportunities to pick up value trades.

Small-cap dividend-payers were particularly impacted during the 2020 pandemic and faced some of the strongest selling pressures all year. We believe small caps are ripe for Christmas shopping lists, particularly to get ahead of the January Effect in small caps.

There are risks associated with investing, including the possible loss of principal. Funds focusing their investments on certain sectors and/or smaller companies increase their vulnerability to any single economic or regulatory development. This may result in greater share price volatility. Please read each Fund’s prospectus for specific details regarding the Fund’s risk profile.