There’s no rest for the Federal Reserve (Fed). Another week, another facility, but this time around it did not involve the money and bond markets. Rather, it was a program geared toward the small business sector of the economy. With the alphabet soup of facilities that have all been announced by the Fed over the last month, I thought it would be useful to narrow the scope a bit and just focus on the programs that involve the financial markets more directly. In other words, the Fed is going bond buying. 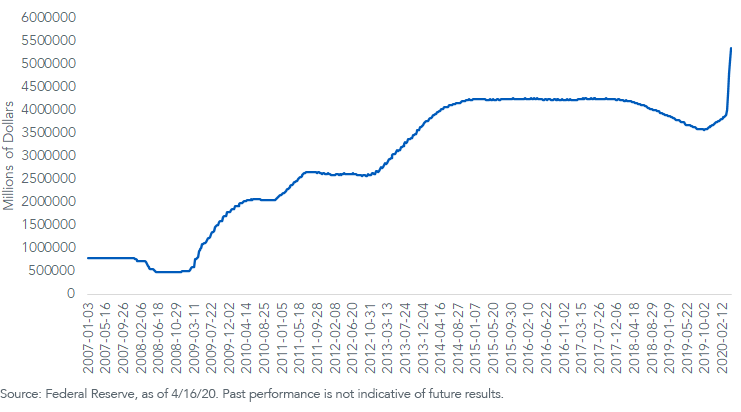 Without a doubt, the first place to start is quantitative easing (QE), or the Fed’s outright purchases of Treasuries and MBS. Since the FOMC announced QE4 on March 15, the bond buying has been fast and furious. According to the latest data, Fed holdings of these two asset classes have surged by nearly $1.5 trillion in just a one-month span (see graph).

With respect to the rest of the Fed’s overall balance sheet, this is where things get a little interesting. Even though additional programs have been announced, not all of these facilities are up and running yet. In the case of the Commercial Paper Funding Facility (CPFF), it was only launched last week. Of the programs/facilities currently operational (not all of which are strictly money and bond market-oriented), an additional $500 billion has also been added to the balance sheet, bringing the combined total to about $2 trillion. The balance sheet as a whole is now in excess of $6 trillion—or to quote Ralph Kramden, “a mere bag of shells.” LOL.

Thus far, you have to give the Fed relatively high grades for not just its proactive policy responses, but perhaps more importantly, how the markets have reacted. Remember, it is all about results! Dislocations and/or pressures in the funding, Treasury and credit markets have eased. In the case of UST purchases, the Fed has pared back its torrid pace of buying, no doubt a sign the policymakers feel the situation there has improved enough to do so.

The Bottom Line: That’s the good news. However, the Fed can’t rest on its laurels at this point. The last thing anyone wants is for the recent improved setting to take a step backward. In other words, the policymakers must follow through on their prior announcements and get the IG/HY corporate and muni facilities up and running, which as of this writing was not yet the case. Hopefully, Fed buying in these bond arenas can be limited in nature because the markets are functioning better, but they will still need to “deliver the goods.”

Unless otherwise stated, data source is Bloomberg as of April 17, 2020.