The Fundamental Problem for Indexes

In short, if investors believe they can’t consistently profit from the inefficient pricing of securities, they should aim to earn the market average return at the lowest possible cost.

But from time to time, systemic asset bubbles or excesses in individual company valuations can challenge that efficiency.

This raises a question for investors: should indexes screen on fundamentals for inclusion, and by extension, for weighting?

The financial media was buzzing recently over an MSCI decision (and about-face) to include a little-known Hong Kong-listed company, ArtGo, in its MSCI China Index. ArtGo rallied 3,800% this year, in part because of MSCI’s inclusion, resulting in a frothy 85 times sales valuation.

The Wall Street Journal had the most scathing assessment.

In a column titled “Index Funds Need Better Gatekeepers,” Jacky Wong wrote that “a simple smell test would be enough to rule out the likes of ArtGo—a dowdy company whose shares had risen by a factor of 40 in a year despite no profits and declining sales.”1

Market efficiency often makes broad, passive indexing a sensible approach for investing across markets and regions. But there can be risks to cap-weighted indexes, as Ms. Wong rightly points out.

ArtGo is a high-profile example of what can happen to a negative earner that eventually has expectations come back to reality. After MSCI reversed its inclusion decision, its stock plunged 98% in a single morning.

A section of Jeremy Siegel’s Stocks for the Long Run, titled “The Pitfalls of Capitalization-Weighted Indexing,” argued there could be valuation risks for cap-weighted indexes, like the S&P 500 Index, in part driven by their increasing popularity:

If a firm’s mere entry into the S&P 500 causes the price of its stock to rise, due to the anticipated buying by index funds, index funds will hold a number of overpriced stocks that will depress future returns.2

This is exactly the type of buying that was going on with ArtGo.

Professor Siegel’s preferred solution for this pitfall was fundamentally weighted indexes. These indexes have a high correlation to market cap-weighted indexes but tend to skew weight toward value stocks. Each constituent is weighted by fundamentals like dividends, earnings, cash flows or book value, instead of market capitalization.

WisdomTree launched some of the earliest fundamentally weighted indexes in emerging markets in 2007.

For this market, WisdomTree opted for weighting by cash dividends, which offered a uniform and unambiguous measure of value across countries.

The tables below show the quintile returns for the MSCI Emerging Markets Small Cap Index by dividend yield and earnings yield. This index has about 11% of its weight in negative-earning companies, relative to just about 3.5% for the broader MSCI Emerging Markets Index—making a fundamental screen possibly more important for lower-quality small-caps.

Over the full decade there has been a clear relationship between both higher-dividend yields and earnings yields (lower price-to-earnings) and higher-quintile returns.

WisdomTree’s dividend-weighted small cap Index tended to have greater weight in the top three quintiles. Equally important, the Index tilted away from the categories of non-dividend payers and negative earners that had negative returns over the period. 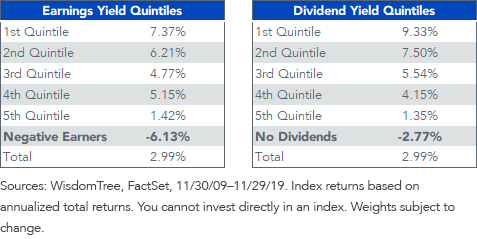 Dividend-weighting has tended to naturally tilt the WisdomTree Emerging Markets SmallCap Dividend Index (WTEMSC) away from negative earners—companies that pay higher cash dividends tend to also be more profitable. But in 2018, an explicit positive-earnings screen was added to the Index methodology as an additional check on avoiding negative earners.

As a result, the Index has a modest 1.3% weight in negative earners, discounted valuations and a significant improvement in aggregate return-on-equity relative to the cap-weighted benchmark.

Since inception in 2007, WTEMSC has outperformed the MSCI index by over 300 basis points annualized, with over 200 fewer basis points of volatility. 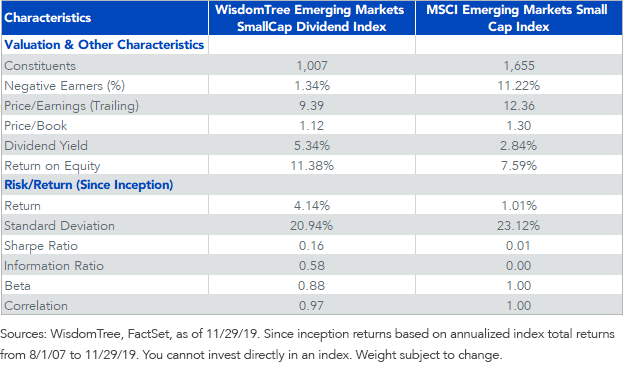 The ArtGo example highlights an important question for index-based investing, about whether indexes should have rules that account for fundamentals, like earnings or dividends.

WisdomTree’s emerging market small-cap index offers an example of how a fundamentally weighted index can be constructed with a sufficiently broad universe (~1,000 constituents) and maintain a high correlation to the market-cap weighted universe (correlation of 0.97), while avoiding some of the more speculative parts of the market that have been shown to detract from long-term returns.