International equity markets have made headlines this year for all the wrong reasons.

Between an abundance of negative-yielding sovereign debt, the fear of a catastrophic “no-deal” Brexit, and central banks struggling to remedy their worsening economies, it has been difficult to find an investment that can outpace the region’s dull prospects.

But just because lackluster performance and looming uncertainty have become the status quo in developed markets doesn’t mean investors need to acquiesce and hold on for the ride.

One year ago, WisdomTree introduced a unique way of investing in developed international equity markets based on an analysis of technical and fundamental factors. Since inception, the WisdomTree International Multifactor Fund (DWMF) has amassed over 359 basis points (bps) of outperformance against the MSCI EAFE Index (on a net return basis), proving there is no need to settle for underwhelming returns just because the region has little to offer. For standardized performance of DWMF, please click here.

Looking Under the Hood

WisdomTree’s approach blends both technical and fundamental analysis. It scores companies based on a combination of value, quality, momentum and correlation measurements. The result is a carefully selected basket of about 200 holdings with the highest composite scores, split between large- and mid-cap companies with diversity by both sector and country. The icing on the cake is a dynamic currency hedge that uses carry, value and momentum factors to mitigate the risks associated with weakening developed market currencies.

Emphasis on the four factors also provides significant diversification across the Fund’s holdings and factor exposures. Whereas other market cap-weighted developed market indexes concentrate much of their weight in a smaller number of holdings, WisdomTree’s strategy distributes its allocations more broadly thanks to its factor-weighting mechanism. For example, the top decile of companies in the MSCI EAFE Index amounts to 92 companies and holds close to 46% of the index’s total weight. WisdomTree’s weighting mechanism cuts this concentration almost in half, with its top decile holding less than 20% of the total weight. This increased diversification has provided the Fund with the ability to maintain a low beta while still leveraging its model-based multifactor stock selection process to help generate excess returns.

Reading Between the Lines

In figure 1, we break down DWMF’s performance since inception across the two components alongside that of the MSCI EAFE Index. DWMF’s stock selection, shown as the orange line, has consistently outperformed on its own. The dynamic currency hedge return, shown as the teal line plotted on the right-hand axis, also contributed to the overall performance of the Fund (shown as the dark blue line) and helped reduce drawdown during volatile market periods. 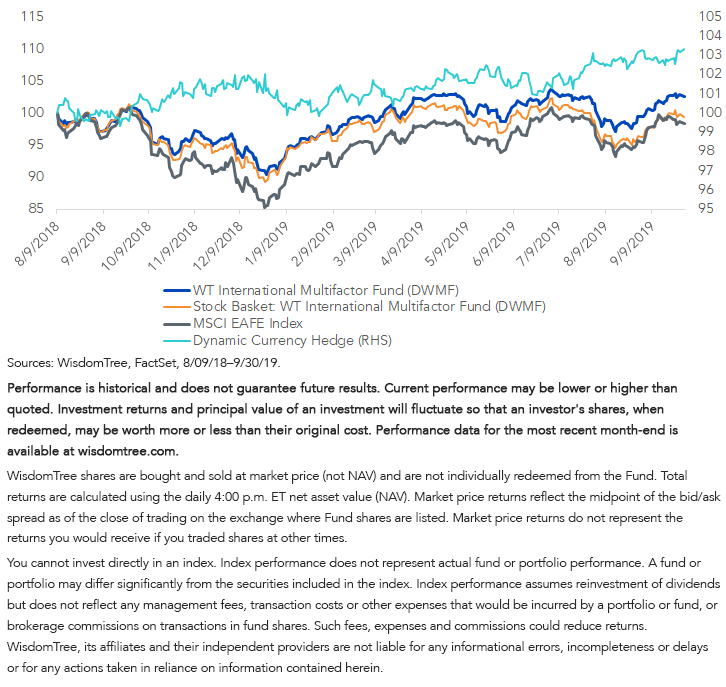 Since DWMF’s inception, both the stock selection and the dynamic currency hedge have worked together to achieve DWMF’s outperformance. The interaction between these two has contributed to the strategy’s lower beta, which has been especially valuable during periods of heightened volatility, such as December 2018, May 2019 and most recently in August 2019. Keep in mind, when markets are ripe with uncertainty and recession anxieties are top of mind, downside protection can be just as valuable as outperformance itself.

WisdomTree’s approach also offers distinct, fundamental advantages due to its emphasis on value and quality factors. As of its most recent rebalance on September 13, the multifactor strategy offers a 12.5% discount in its price-to-earnings ratio compared to the MSCI EAFE Index. Likewise, it provides a 282-bps improvement in return on equity and an 81-bps enhancement in return on assets, both attributable to the strategy’s focus on well-capitalized companies with efficient and robust operations.

As a result, the Fund provides a selection of healthy companies at a discount to the broad developed market, which is especially important in a region with sluggish growth.

Figure 2: The Factors Explain the Fundamentals

It’s Time to Get Creative in Developed Markets

Although the Fund is still in its infancy, it has already proven that there’s value in a multifactor stock selection strategy in developed equity markets.

Couple that with a currency risk mitigator, and suddenly the region has much more to offer than geopolitical uncertainty and sluggish economic activity.

While it’s easy to be discouraged by prospects within the region, at WisdomTree, we believe there’s opportunity in every market. You just need to know where to look for it.

Unless otherwise stated, data sources are WisdomTree and FactSet, as of 9/30/19.

Investing involves risk, including the possible loss of principal. Investments in non-U.S. securities involve political, regulatory and economic risks that may not be present in U.S. securities. For example, foreign securities may be subject to risk of loss due to foreign currency fluctuations, political or economic instability, or geographic events that adversely impact issuers of foreign securities. Derivatives used by the Fund to offset exposure to foreign currencies may not perform as intended. There can be no assurance that the Fund’s hedging transactions will be effective. The value of an investment in the Fund could be significantly and negatively impacted if foreign currencies appreciate at the same time that the value of the Fund’s equity holdings falls. While the Fund is actively managed, the Fund’s investment process is expected to be heavily dependent on quantitative models and the models may not perform as intended. Please read the Fund’s prospectus for specific details regarding the Fund’s risk profiles.