July 28, 2022, was a historic day in both biology and artificial intelligence (AI). DeepMind, an Alphabet-owned AI research firm, made the structural data on more than 200 million proteins from its AlphaFold tool freely available. This represents data on roughly 1 million species and covers the vast majority of known proteins on Earth.1

In Proteins, Shape Can Determine Function

In the late 1990s into the early 2000s, the scientific community was awash with news of the race to sequence the human genome. This genome contains the instructions embedded in DNA about how cells should build certain structures, typically by forming proteins made from different combinations of amino acids.

In a sense, DNA is the instruction manual, amino acids are the building blocks and proteins are the product. Knowing the code, though important, is not enough.

Figure 1 is instructive on the point. This is the image of a protein that may protect the organism responsible for malaria from attack by the human immune system. Even if you knew the list and the order of all the amino acids, it would be difficult to go from that list to something that looks like Figure 1 in three dimensions. 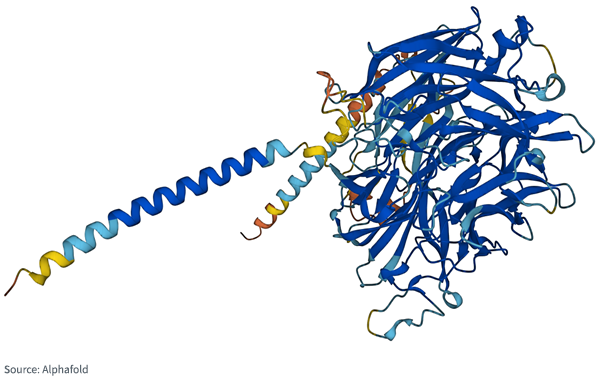 The importance of the shape of the protein can not be overstated:

Scientific breakthroughs are difficult, in that, in many cases, one builds on another and another and another. The process can take decades before widespread results impact the lives of the general public. For instance, we sequenced the human genome, but that did not necessarily lead to immediate cures for all sorts of diseases or conditions. While mRNA research had been occurring for decades, the COVID-19 pandemic was a catalyst that supercharged the process of using mRNA in the specific case of the vaccines.

AlphaFold’s new database is therefore unlikely to lead to immediate cures for challenging conditions. The critical element regards how researchers who would have formerly had to undertake a cumbersome process of X-ray crystallography to determine the shape of a given protein could instead go to the database. Experimental techniques would still have their place, but less time would have to be spent on the equivalent of the blank page.

What’s also incredible is that AlphaFold’s database is, in conjunction with the European Molecular Biology Laboratory’s European Bioinformatics Institute (EMBL-EBI), freely available with a simple interface. It also provides an estimate of the accuracy, recognizing that predictions based on AI do not always yield perfect results. Roughly 35% of the 214 million predictions are deemed highly accurate—roughly as good as experimental results. A further 45% are deemed to be accurate enough for many applications.2

Even before the onset of inflation at the levels seen in the summer of 2022, it was widely recognized that drug development is time-consuming and expensive. As a result, many medications carry exorbitant price tags. Any process that could mitigate this pressure without degrading the quality of the therapies would be enormously valuable.

Considering the following could be instructive as the space continues to progress:3

We’d note that it’s more a story of progress than perfection, in that we appear to be some distance away from AI being able to fully create new drugs. But AI represents an entirely new set of tools that could have beneficial impacts. AlphaFold’s database, for example, may provide drug researchers with important inputs and catalysts for different ideas, even if it doesn’t have the immediate answer or cure right there in its system.

Focus on the AI and BioRevolution Megatrends

WTAI: There are risks associated with investing, including possible loss of principal. The Fund invests in companies primarily involved in the investment theme of Artificial Intelligence (AI) and Innovation. Companies engaged in AI typically face intense competition and potentially rapid product obsolescence. These companies are also heavily dependent on intellectual property rights and may be adversely affected by loss or impairment of those rights. Additionally, AI companies typically invest significant amounts of spending on research and development, and there is no guarantee that the products or services produced by these companies will be successful. Companies that are capitalizing on Innovation and developing technologies to displace older technologies or create new markets may not be successful. The Fund invests in the securities included in, or representative of, its Index regardless of their investment merit and the Fund does not attempt to outperform its Index or take defensive positions in declining markets. The composition of the Index is governed by an Index Committee and the Index may not perform as intended. Please read the Fund’s prospectus for specific details regarding the Fund’s risk profile.

WDNA: There are risks associated with investing, including possible loss of principal. The Fund invests in BioRevolution companies, which are companies significantly transformed by advancements in genetics and biotechnology. BioRevolution companies face intense competition and potentially rapid product obsolescence. These companies may be adversely affected by the loss or impairment of intellectual property rights and other proprietary information or changes in government regulations or policies. Additionally, BioRevolution companies may be subject to risks associated with genetic analysis. The Fund invests in the securities included in, or representative of, its Index regardless of their investment merit and the Fund does not attempt to outperform its Index or take defensive positions in declining markets. The composition of the Index is governed by an Index Committee and the Index may not perform as intended. Please read the Fund’s prospectus for specific details regarding the Fund’s risk profile.