What's Next? How to Think about China Equity in Your Portfolio

Many investors are wondering how to think about Chinese equities following the recent headlines. Here’s what I believe investors should consider:

1. The worsening U.S.-China relations trend and the higher risk to Chinese equities, particularly those listed outside China in the U.S.

It’s increasingly clear that existing problems like the delisting of Chinese stocks on U.S. exchanges will not be solved. But the risk is whether there will be new escalations coming. From the U.S. side, the virus origin report from the Biden administration in September could be a leading indicator. From the China side, how it responds to situations in the South China Sea will dictate further global responses. If international politics becomes the only focus for the Chinese government, then there is little room for China equity. The government directed the central bank to cut the reserve ratio this past month, suggesting growth and employment are still an important focus. Ex-state-owned companies will be important players as long as growth is still valued by the government.

2. There are valid political reasons to avoid China, but if you want broad, inexpensive and index-based Chinese exposure, an ex-state-owned broad sector China index is the best bet.

When it comes to China, the party plays a significant role in every person and company’s life. Tencent, for example, doesn’t deny it works with the government to censor speech. Yet having Tencent as a non-state media platform has increased ordinary Chinese citizens’ freedom to access information and news, which was monopolized by the state.

WisdomTree’s Index has 25% exposure to China A shares to hedge some risk against offshore listed stocks, plus broader sectors beyond just China tech, and has proven that the ex-state-owned theme holds up.

Even on specific days when private Chinese education companies and the ex-SOE concept are the target, shares were down no more than most other China indexes. That’s testament to the strength of an ex-state-owned investment theme in China.

3. Growth is still the overarching risk to China equities, even though regulation risk dominates national news and single stocks and sectors for now. Chinese equities trade at a significant valuation discount relative to sales growth rates because of regulation risk. Politics aside, with low correlation to U.S. equity and a high valuation discount, it still offers good investment prospects. 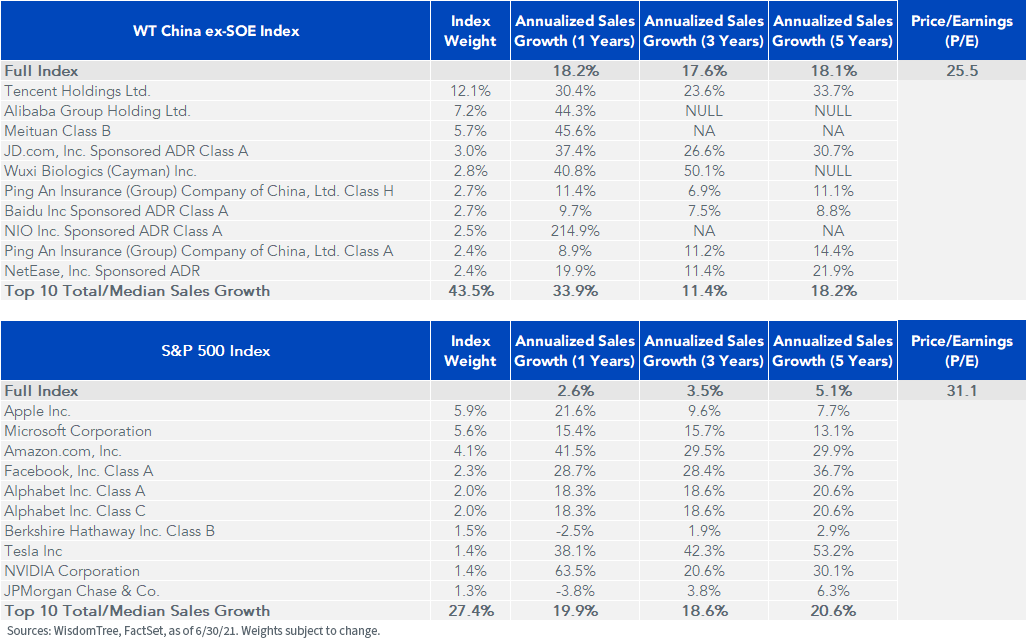 If the Chinese economy cannot deliver growth and Chinese companies can’t continuously innovate to make money, we wouldn’t even be talking about China equity.

I was a paying customer of New Oriental Education, which was front-page news the last couple days as it made its first barrel of gold from offering English classes for students applying to U.S. graduate schools. The founder comes from a humble background and had little English education. His story is worth a Wikipedia read to understand some details about Chinese ex-state-owned education companies.

China’s academic education demand will still be there, but financial capital will have little chance to earn returns for now. I went through that system. Even today, at most about 50% of Chinese junior high school students are admitted to regular high school, with the rest going to vocational high school. About 50% of high school students are admitted to four-year colleges, which has increased from less than 5% in 1977. Apart from some implicit favors for children of high officials, both selections are based on intense standardized academic tests.

Private tutoring was very limited when I grew up in the 1980s. Later it was more mom-and-pop offerings by teachers on the side. But in recent years, private academic tutoring exploded to become a fully scaled industry, with significant capital and digital technology to meet the demand from parents. On a per-capita basis, the Chinese government spends significantly less on education (about one-quarter of what the U.S. government spends), with households making up the difference.

A lot of the demand is peer pressure among parents. Well-off middle-class parents in cities could easily spend 100k RMB ($15k) on a single kid each year, but there is widespread public disgruntlement over increased education inequality and the cost of having children. As similar experiences in South Korea and Singapore show, this Chinese government ban will not necessarily reduce tutoring demand—just morph it into a different form. Unsurprisingly, entrepreneurs who already offer their services for teaching parents to teach children or “family together fun and learn” see this ban as a business opportunity. Education inequality will continue as long as there is income inequality.

4. The WisdomTree China ex-SOE Index does not engage in timing Chinese equities, nor timing sectors or stock selection. But here are some trends we think will be relevant in the coming years. China’s movement to forbid any private businesses altogether is likely to be contained to the education sector, but firms that have extremely high profit margins will also become targets.

There is a broad national sentiment against capital, particularly foreign capital in the government’s turf. Any China or emerging market fund that has offshore Chinese stocks like Tencent or Alibaba has VIE exposure. The VIE structure that allows foreign capital into areas such as education, health care, media and finance—which are mainly considered the domains of the Chinese government—will face higher regulatory risk. VIE as it currently stands will not continue, but few know what’s next. One idea that’s been floated is to have a hard cap on foreign ownership, but there are few details. Vietnam offers examples and past experiences of having a hard cap for some of its listed companies.

In health care, government regulations have a goal for medical services to be provided by state-owned hospitals with supplemental private participation encouraged. We are having representatives from the private Chinese hospital chain AIER Eye Hospital come to talk to us on how they view and manage regulation risk.

U.S. listings used to be championed but are now frowned upon. Many large companies already have both U.S. and Hong Kong listings. Firms that are listed in the U.S. but currently have no Hong Kong listing carry extra risk, with the U.S. delisting law that is passed already. Readers might be surprised to learn it is harder to list shares in Hong Kong than the U.S. due to stricter profitability requirements to have shares listed in HK.

There is also a broad sentiment against the high cost of having children and the “corruption” of children’s minds. Education, real estate and gaming will face more regulations down the road. But this is not new.

If there is an industry group, particularly in leading frontier technology areas such as chips and drug development, where there are few Chinese companies but lots of U.S. companies, China’s government will encourage this segment. China consumer tech has fallen out of favor because it has been too successful and crowded. Didi’s ride-sharing business was picked up by Meituan and others instantly, which makes any individual company less important to the government.