Is it fair to say a key influence on the state of the global economy in the next 20 or 30 years will be the pace of India’s development? I think it’s reasonable enough.

Which is why I titled this blog post the “accidental underweight.”

Suppose an equity allocator puts 10% into an emerging markets tracker fund, with the rest in the U.S., Europe, Japan, etc. Because India is about one-tenth of emerging markets’ market capitalization, this investor has about 1% of total capital allocated to India.

Is that how you would play it if you had to do the proverbial Rumpelstiltskin routine and wake up in 2050?

Check in on birth rates. For context, I highlighted in red the trio of China, Hong Kong and Taiwan (with a hat tip to Hong Kong being among the ranks of the advanced economies, but increasingly in the fold of the mainland). 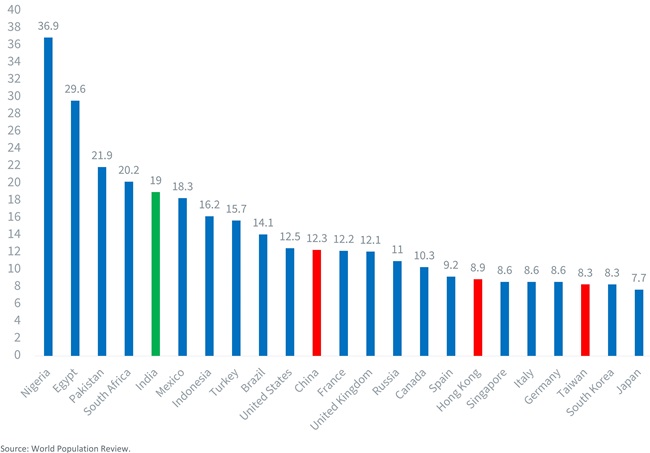 If we witness a power struggle between India and China in the coming decades, it may pay to consider that India’s 1.4 billion population is set to grow. The CIA World Factbook’s estimate of its 2021 birth rate is 2.28 per woman.

In contrast, some demographers believe China witnessed its population peak in 2020, at 1.3 billion. That amount will grind lower because of the 1.6 per woman birth rate, a number that will not likely budge much in response to the infamous “one-child policy” becoming a “two-child policy” and, last month, “a three-child policy.”

While we embark on the 2020s with India’s fertility matching what we may see in South Africa or Mexico, China will witness French-style birth trends. In Hong Kong, the obvious: the apartments have been, are, and will be tiny. It’s tough to squeeze everyone into a studio apartment. As for Taiwan, its fertility rates are positively Germanic. By the way, Germany’s population fell in 2020, just like China’s.

By sheer force of its humanity, India’s GDP was $2.9 trillion in 2019, making it the world’s fifth largest economy. The country’s 3% share of the global economic pie will expand as the Global South gains influence relative to the industrialized world. It may have to wait out 2021 though. The country witnessed real GDP growth of around 4% in 2020, though its battle with COVID-19 sent the economy reeling this year. Fitch has it contracting 7.9% in 2021.

The International Monetary Fund (IMF) anticipates India will rank sixth in the global order when 2021 is said and done, though most seers have it overtaking the U.K. and then Germany sometime this decade. 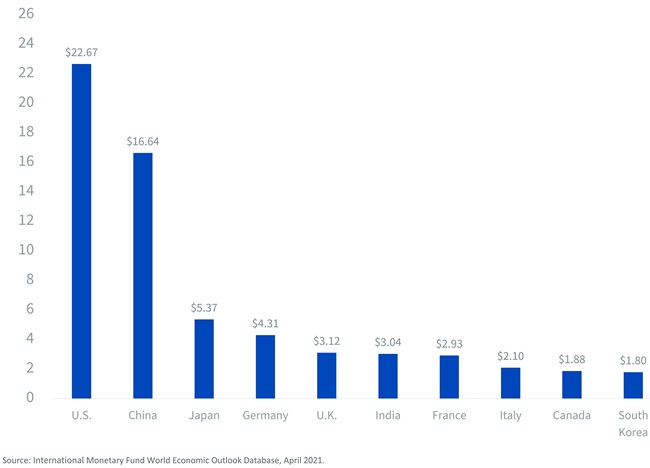 Make no mistake, India is an impoverished nation. Deeply impoverished. For examples of real life problems that fortunately do not confront us in the West, one of Narendra Modi’s first initiatives as prime minister was finding a way to offer sanitary conditions for the populace to go to the bathroom with dignity, as many in rural villages have no choice but to use communal facilities.

India is one of the countries in emerging markets that truly is still “emerging.” By some measures it could be a frontier market, but the country’s capital markets are somewhat established, so it has graduated to emerging status.

If you can get past India’s intense COVID-19 struggle and realize that most Western advisors might have a half percent or a percent of equity capital in the country, therein lies a potential edge.

One has a large asset base due to the classic ETF first mover advantage; it was launched in 2008 and was then the only India ETF. The other one does not get much love because, frankly, not many people ask us about India.

The older one is the WisdomTree India Earnings Fund (EPI). It employs a modification of capitalization weighting, where each company’s weight is found by dividing its earnings by the total earnings of all the other companies.

The other one covers all of India but kicks out companies that have more than 20% of their equity owned by the government. It is called the WisdomTree India ex-State-Owned Enterprises Fund (IXSE).

Either of them may be an idea for rectifying the “accidental underweight.”

There are risks associated with investing, including the possible loss of principal. Foreign investing involves special risks, such as risk of loss from currency fluctuation or political or economic uncertainty. The Funds focus their investments in India, thereby increasing the impact of events and developments associated with the region which can adversely affect performance. Investments in emerging, offshore or frontier markets such as India are generally less liquid and less efficient than investments in developed markets and are subject to additional risks, such as risks of adverse governmental regulation and intervention or political developments. As the Funds have a high concentration in some sectors, the Funds can be adversely affected by changes in those sectors. Due to the investment strategies of the Funds, they may make higher capital gain distributions than other ETFs. Funds focusing their investments on certain sectors and/or regions increase their vulnerability to any single economic or regulatory development. This may result in greater share price volatility. IXSE invests in the securities included in, or representative of, its Index regardless of their investment merit and the Fund does not attempt to outperform its Index or take defensive positions in declining markets. Please read each Fund’s prospectus for specific details regarding the Fund’s risk profile.